6 lessons in living (and entertaining) by the beach 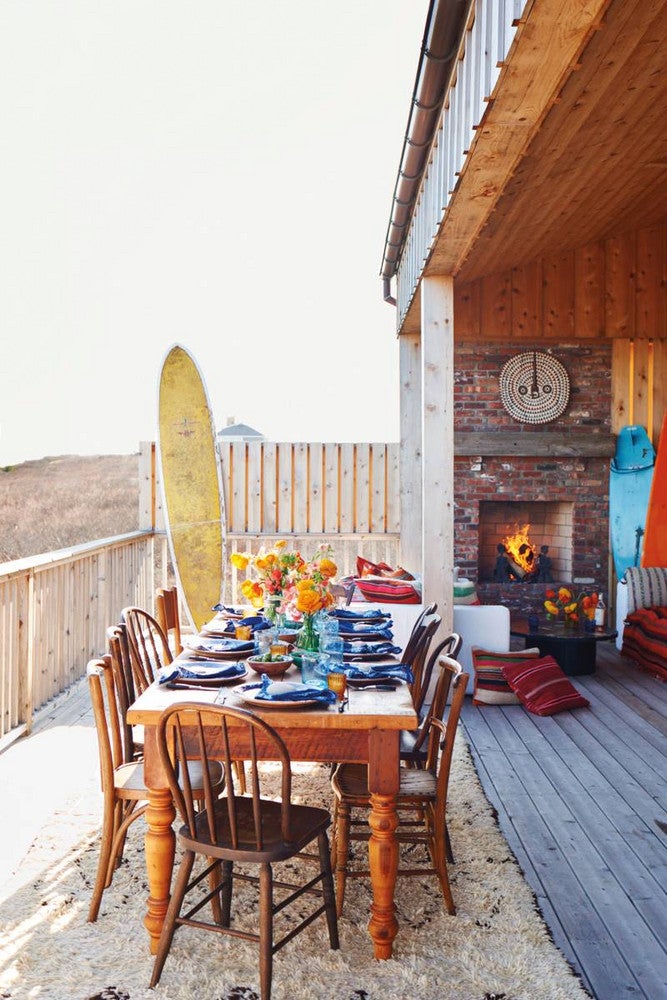 SEAN MACPHERSON and Rachelle Hruska’s summer house in Montauk is the antithesis of the palatial Hamptons estate: “It’s basically a cross between a fort and a surf shack, like something out of Robinson Crusoe,” says MacPherson, the Malibu-born hotelier whose empire spans from the nearby Crow’s Nest in Montauk to the Marlton, the Ludlow, and the Bowery hotels in Manhattan to restaurants and bars in Los Angeles. “We intentionally didn’t decorate the house, and that ultimately became its ethos; it’s totally not precious, just a cozy, funky little seaside escape for our family,” adds MacPherson. Perched at the end of a dirt road overlooking Ditch Plains Beach, the rustic retreat was built in 1964 (the year MacPherson was born) as a simple stick construction with only 800 square feet, though the couple has finally finished up renovations to make room for their two sons, Maxwell and Dash. Inside its recycled barn-wood interior is a worldly mix of pieces they have purchased during their travels: Turkish beach towels from the bazaars of Istanbul; pillows picked up in the medinas of Marrakech; wooden bowls found in Pavones, Costa Rica; African masks; embroidered Khati textiles from Delhi. “The house is so much fun to buy for whenever we travel,” says Hruska, who is the founder and CEO of Guest of a Guest, adding that they’ve most recently been inspired by Christmas holidays spent in José Ignacio, a remote village in coastal Uruguay where they discovered Martín Pittaluga’s La Huella, one of the best beachside restaurants in the world, and down the road, Fernando Trocca’s otherworldly paella at Santa Teresita.

The house is also layered with distinctively Californian and locally sourced treasures: Raymond Pettibon surf prints and redwood burl coffee tables vie with vintage black-and-white aerial photographs of Montauk, a cobalt mid-century O’Keefe & Merritt stove found upstate, and collages by Peter Beard, who is a neighbor and close friend. They’ve also accumulated countless odds and ends from past hotel projects—the dining chairs came from the Crow’s Nest, while their linen closet includes everything from John Robshaw and Matteo sheets to bedding leftover from the Bowery and the Maritime.

“The house is pure hodgepodge and happenstance,” MacPherson says. “It reminds me of driftwood—pieces sort of wash in, and then they wash out. Whatever ends up inside just seems elemental and organic, and it always feels like endless summer.”

The couple entertains often, but always keeps it casual. Hruska loves using beach finds to set the table, be it centerpieces made of driftwood or smooth painted stones used as place settings.

Collected items and meaningful art add pops of color to a rustic backdrop. Vintage black-and-white prints of Montauk hang next to The Singing Rhino, a collaboration between Hruska and artist Peter Beard— a birthday present for Sean.

“Our house overlooks the bluffs and the cliffs of Ditch Plains Beach—it’s such a dramatic and romantic landscape,” Hruska says.

“Moose antlers, when left out in the sun, will turn white, making them look almost sand-colored,” MacPherson explains. “After they bleach out a bit, they remind me of the beach.”

Large-format food is fun and celebratory. A giant steel pan of paella, inspired by recent vacations spent in Uruguay, has become the couple’s signature summer dish. A massive board of sliced tomatoes gets a simple treatment of olive oil, sea salt, and fresh fennel.

Hruska and MacPherson layer their favorite found textiles and souvenirs, like colorful Moroccan pillows and oversize blankets, to create a stylish yet fuss-free post- beach outdoor lounge and hangout spot.

“We’re literally at the end of the road,” MacPherson says. “For me, there’s something almost Proustian about spending time in Montauk; it reminds me so much of my childhood in Malibu.”

Sean has been surfing since before birth: His mother, Janet MacPherson, was a women’s champion surfer, and surfed throughout her pregnancy. He grew up catching waves in California and Baja. Nowadays, he typically takes his longboard out in Montauk every morning before breakfast.