We Want to Live in NYC’s Most Colorful Office 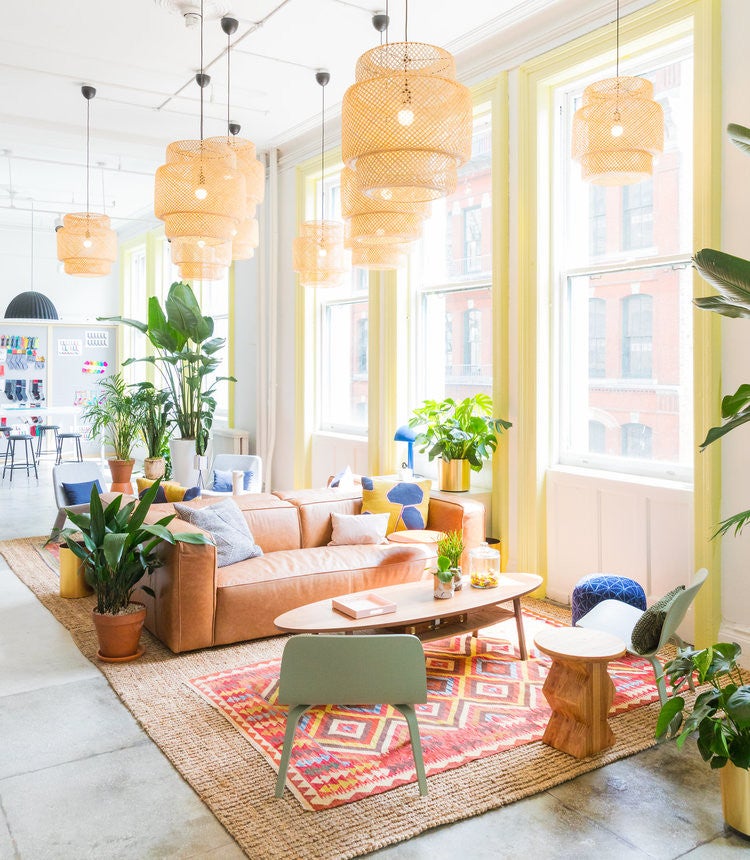 Bombas—derived from Latin, for bumblebee—is a brand with a line of athleisure socks, out to make the world a better place. Their mantra is a simple one: to “bee better” (come on, who wouldn’t have taken advantage of that?) and that is exactly what they’re striving to do by donating a pair of socks, for every sock sold, to someone in need. And being the rapidly expanding purveyors of socks that they are, Bombas recently moved into their new digs in Manhattan’s Union Square.

The new headquarters, which stands in place of a former carpet warehouse, had little to offer aside from high ceilings and concrete floors, a somewhat solid starting pointing for the redesign that would ensue. In need of a thoughtful growth plan and an efficient use of space, Bombas tapped Float Studio—whose previous works include this Instagrammable orthodontics office—for the project.

At the top of Bombas’s list of needs were to have an open layout office space that would promote productivity, housing all of their business operations, short of manufacturing. We caught up with the design firm to get the scoop on the project, and snagged a few helpful decorating tips along the way. Take a look.

Light-filled, plant-filled, and everything else in between, the decorative scheme of the office is a far cry from that of the traditional NYC space. “Culturally, they are a laid back group, so we wanted to match that,” notes Brad Sherman, partner at Float Studio, of the Cali-cool-inspired aesthetic of the office. A pleasant departure from what we’re used to on the East Coast, Bombas’s new digs is all about the unapologetically colorful.

With the intention of establishing boundaries within the open-layout office, the design team brought in gridded planters, which would double as room dividers to promote a sense of visual depth. The addition of the greenery would contribute to an element of liveliness in the office.

“Bombas has a company culture full of idiosyncrasies so it was important to us that the space followed suit,” notes Sherman. “We designed 9 ft. workstations to dot the open workspace surrounded by airy, custom shelving systems made of white, wiry grids that provide storage space and housing for greenery.”

In one of the office’s conference rooms, a custom wallpaper decks the walls, following the bumblebee motif of the brand. “[It’s] an image of a hive and human-like bees that Bombas’ staff drew up to give the walls personality,” says Sherman. “The palette for the space has a huge array of texture and color to mimic the movement and variety in their product offerings and provide constant inspiration.”

In regards to how the design team managed to capture the essence of the brand within the design, Sherman notes that “When Bombas approached us we noticed they had begun shifting the color palette of their sock line, bringing in more muted tones along with the vibrant colors. We felt that suited them and their mission better, so we approached them with a blended color palette for the space that would be uplifting and optimistic.”

If there is one standout color moment in the office, this vibrant shade of yellow would have to be it. And what more appropriate choice could there be?  The Muuto sofa not only provides the sitting area with a major dose of color and personality, it also establishes a visually-dynamic focal point.

“Their bee logo and beehive-philosophy [Bees live in a hive and work together to make their world a better place] was a welcome opportunity to bring in yellows and lay out the space with a focus on collaboration,” says Sherman of the abundant use of color throughout the office.

With playful pops of color, a vibrant mix of prints and patterns, plus a decorative scheme that promotes an overarching element of liveliness throughout, it’s safe to say that this office space is about as covet-worthy as it gets.

The Buzz About The Hivery: A Women-Only Coworking Space Outdoor Voices’ New Office Will Make You Want to Work There Inside the Domino Office, Where Good Vibes Rule