The Coolest Luggage Ever Is About to Hit the Market

Is this the next trend in travel? 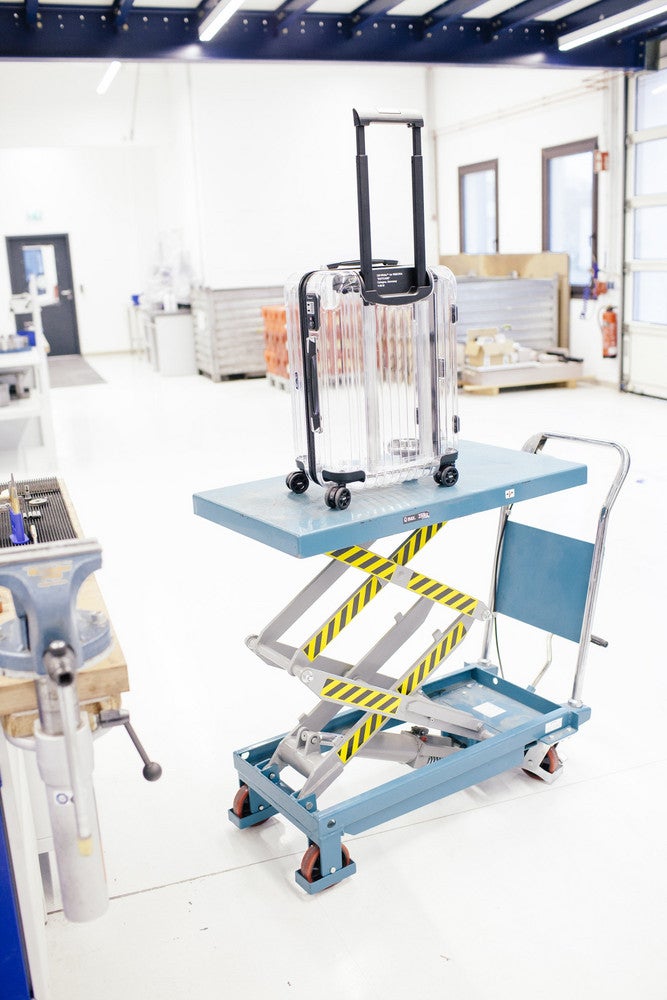 There’s traveling in style, and then there’s this. Iconic German luggage brand Rimowa has teamed up with designer-of-the-moment Virgil Abloh of Off-White for a capsule collection that’s nothing short of incredibly cool. The product? An entirely transparent polycarbonate carry-on case. TSA approval is about to get a whole lot easier.

Based off Rimowa’s Essential model, this design boasts the same high quality and innovative features—like Rimowa’s silent multiwheel system—that the luggage brand is known for, accompanied by the signature street-style twist that characterizes Abloh’s work. According to the designer, opting for a clear case was a choice made for consumers who value identity and customization of their products. In an interview with Business of Fashion, Abloh called his Rimowa designs “3.0 of personalization”.

“It’s not just putting your initials on it, but allowing another layer to come into play. There’s an emotional component to owning [the suitcase], and you become a performance art piece just by using the thing,” explained the designer. “It’s like putting your items on display, and rethinking the premise of a product.”

Sleek black handles offer nondescript accents to each carry-on, which is entirely transparent (there’s no interior lining whatsoever) save for a Flex-Divider system in black with “MISCELLANEOUS” scribbled on it—in homage to Off-White’s instantly recognizable branding. An exclusive transparent amenity kit and an additional set of vibrant orange wheels—the latter of which is another trademark of Abloh’s brand—top off the exclusive collection.

And while this might seem like a daringly contemporary look for a 120-year-old brand like Rimowa (sort of like if grandma decided to suddenly start using a fidget spinner), the company has actually been on the cusp of blending old and new for a while now. Case in point: The brand’s collaboration with equally buzzy streetwear brand Supreme, which launched this spring.

“At LVMH, we have a saying that we like to be between tradition and modernity,” Rimowa CEO Alexandre Arnault told BOF in the same interview. “Maybe there’s a bit of fatigue from customers of traditional brands, and they’re excited by fresh products done in a different way. This is something that’s really well embraced by streetwear. One collaboration in itself won’t be a key sales driver, but ultimately, the social media value of them is extremely important for driving awareness and desirability.”

With a designer like Abloh at the helm, we’re guessing social media visibility won’t be a problem for this collection. With an avant-garde design that’s fashion-forward—but not entirely practical for all travelers—the clear luggage is seemingly made-for-Instagram. Abloh himself is a favorite of Instagram it-girls like Kendall Jenner and Bella Hadid, but to reduce the designer’s influence to social media would be an insult.

Since launching Off-White in Milan back in 2013, Abloh has been on a non-stop quest to tackle all aspects of the design world via covetable collaborations with iconic companies like Nike and (our personal favorite) Ikea. He was also recently named Artistic Director of Louis Vuitton Menswear, making his CV one of the most impressive in fashion right now.

The collaboration with Rimowa will be unveiled during the Off-White menswear show in Paris on June 20, rolling out (no pun intended) to select Off-White and Rimowa stores as early as June 25. At $994, these suitcases aren’t exactly affordable—but for a certain crowd of travelers, we’re sure the collection will be a huge hit. Plus, we have a feeling the stylish design will be trickling down into the mass market within the next few seasons.

The Best Place to Buy Tiny Homes? Amazon Earn $10,000 Simply By Moving to This State Here’s How You Can Star in the Next Season of Trading Spaces