How to Design a Dreamy Nursery for a Future Feminist 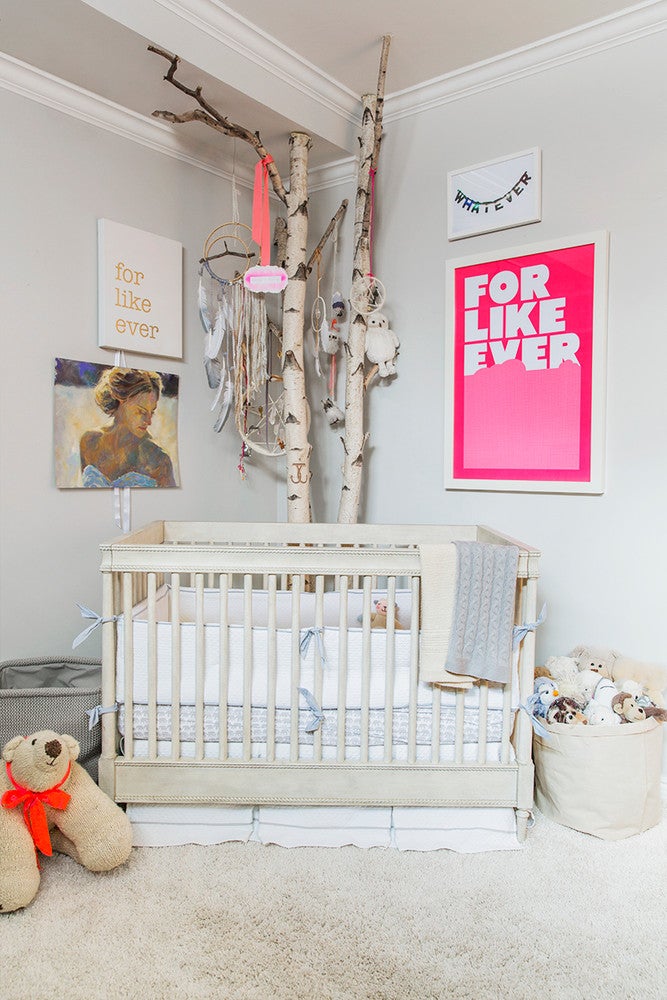 Jenna Arnold has always been passionate about making a difference. “I’ve been in the saving-the-world business for as long as I can remember,” she says.

She and her co-founder Greg Segal started Organize after Greg’s father found out he needed a new heart. After five long years of waiting, he finally received a transplant from a donor and Jenna and Greg had a new goal: change the way the organ transplant system works in America.

Since then they’ve used the power of social media to spread awareness and the importance of organ donation and empower people to share end-of-life wishes with family. It’s crucial work in changing the system and isn’t the only thing Jenna is passionate about. “My life’s work includes raising strong and compassionate children. Kindness and an innate responsibility to give back will likely be my markers of success,” she says.

So when Jenna started thinking about what type of nursery she wanted to design for her baby, she didn’t realize that her future daughter’s personality would so perfectly fit the bill. “Ever shares a lot of my characteristics. She’s very independent, fearless, highly inquisitive and rarely takes ‘no’ for an answer, which means all those in this house should take shelter during those pleasant teenage years,” says Jenna.

Jenna and her husband Jeremy kept the baby’s gender a secret during her pregnancy and did not consider “boy” or “girl” when making decorating decisions. The gray canvas was the perfect neutral backdrop and allowed for pops of color and fun accessories that came once the baby did.

“I’ve accented with fluorescent pink primarily because I love the color, and I refuse to decorate with it in any other room in my house! I’ve found ways to weave it into dream catchers and accessories on stuffed animals so I can easily adjust should baby number two inspire a new color,” she says.

Rather than add furniture designed just for baby, Jenna repurposed regular furniture. Ever’s changing table is a bachelor closet from Ikea and holds barrettes and pacifiers in a drawer designed for cufflinks.

Jenna’s home is often the meeting place for salons covering a vast array of topics, and Ever is often present to listen in on the discourse in her pajamas before bedtime. Jenna is excited about her daughter’s involvement in these discussions one day, among other big girl activities. “The hot pink lasso is waiting for her to start horseback riding next year, hopefully around the same time she’ll learn to ski!”

Throughout the room, there are reminders of Jenna and Jeremy’s life before baby. The birch tree that hovers over the crib was made from the huppah from their wedding. And when it comes to sweet dreams, Jenna’s given that lots of thought too. “I’ve created and commissioned a series of dream catchers that float among the branches from treasures I’ve collected all over the world—driftwood from the North Pacific, crystals mined from small towns in Brazil, vials of sand from one of our favorite places on earth.” Also above the crib is Jenna’s favorite piece in the nursery—an oil painting her Father made of her on her wedding day.

According to Jenna, one of the most important thing to remember is that you’re also designing the space for you. “You’re the one clocking in all the hours there!” she says.

On Raising a Girl

Jenna grew up surrounded by lots of women, a decision she says her Mother made on purpose. “She always said that she was only capable of raising me 47% of the way so curated other women to do the rest,” says Jenna. “It’s a humbling perspective on our limitations as a humans and certainly as mothers.”

This mentality is why Jenna also believes that she shouldn’t be the only one setting boundaries for her daughter. When she drops Ever off at a playdate, she lets other moms know they have full autonomy to discipline her if she misbehaves. “If she is going to take on the world, the world has to raise her,” she says.

The display of artwork is made up of truly intimate pieces which include candid wedding photos, a photo from Jenna’s favorite Gregory Colbert exhibit, and a tile she and Jeremy bought in Alhambra when they found out they were expecting. It reads ‘humility’ in Arabic. The galactic photo hanging in the center is a nod to Jenna’s background studying astrophysics. “It’s also a friendly reminder of how tiny/insignificant we all are. I take comfort in that.”

Sentiments of strong women are visible throughout the nursery, most notably with a “Feminist” banner from The Outrage on the door. “Taking on challenges that face our world can be exhausting, and I know she’ll have to be strong in however she chooses to channel her activism. To build that strength, I stay out of the way when I see her about to fall down,” she says. “I let her pick herself back up. I don’t get in the way of the moments that I know will make her stronger.”