Yes, There is Such a Thing as a Grownup Nursery

This San Francisco baby’s room is so comfy and stylish, you’ll want to live there, too. 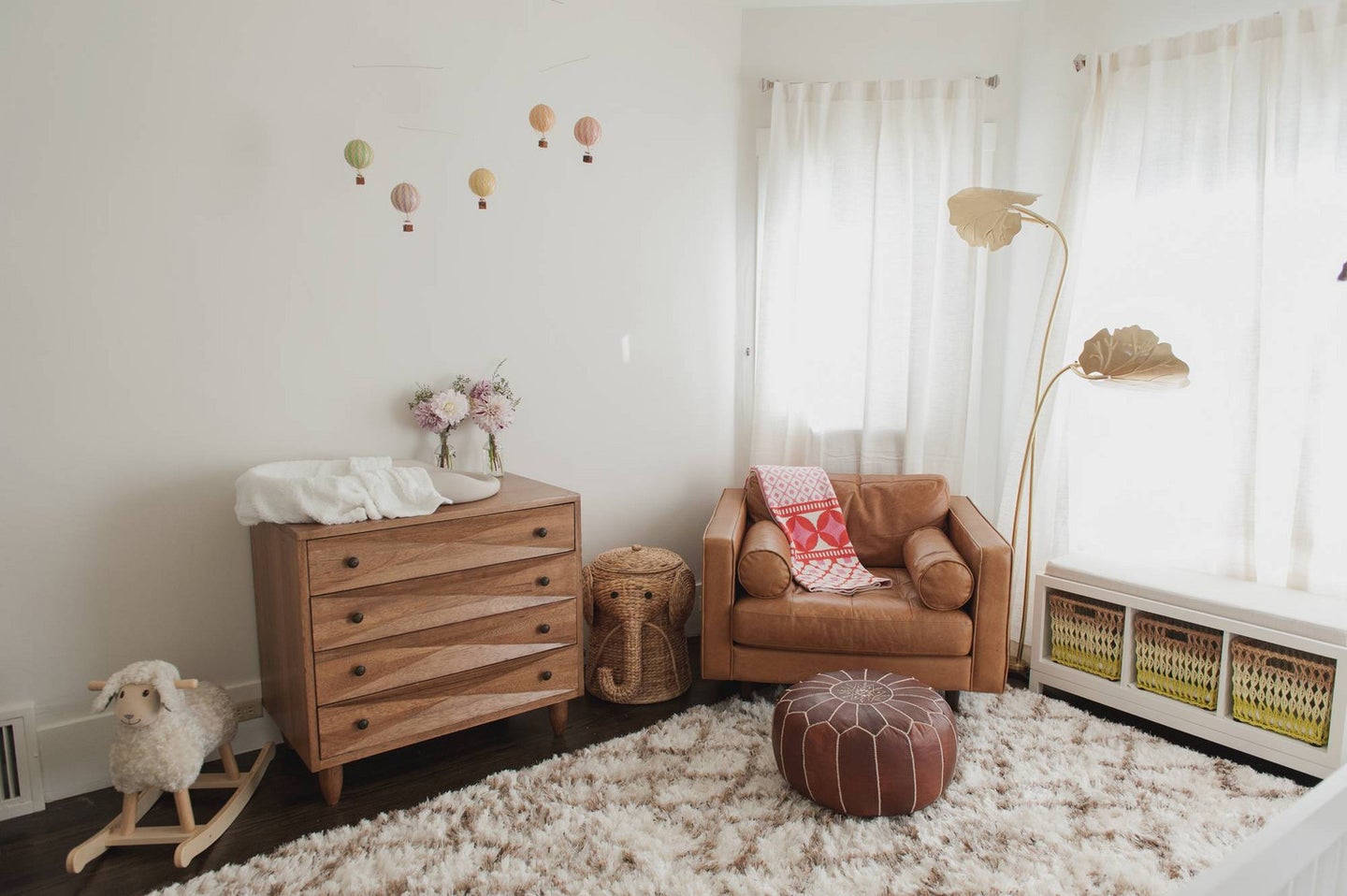 Meena Harris never thought she had an eye for interior design. After all, the former attorney is now the senior policy manager at Slack, a San Francisco startup, and has zero design background. “I would consider myself fairly artistic with a creative eye in other settings,” she says. “But I always felt like interior design was sort of a blind spot for me.” Clearly, Harris was wrong. In the Ashbury Heights/Buena Vista Park-based, three-bedroom, 2,000-square-foot Edwardian-style home she lives in with her partner, Nik Ajagu, and now five-month-old daughter, the style is vibrant and playful yet decidedly sophisticated and comfortable. And that’s exactly the aesthetic the couple was going for when they designed the nursery when their baby was just two weeks old. “After painting the entire home, the nursery was the first room we decorated,” says Harris. Here, she details what inspired the design.

What was the inspiration for the design of this room?

We wanted something fun, vibrant, and colorful for the baby’s visual stimulation, but also something polished that would go with the rest of the house. In that sense, we hoped to avoid an overly “kiddie” look and wanted the decor to endure over the years as the baby gets older.  Likewise, we chose several pieces that we knew we could repurpose for other rooms if we wanted to switch things up later on. This includes the leather armchair, the Moroccan pouf from Serena & Lily, the chest of drawers (functioning in the nursery as a changing table), and the carpet.

Where did you start with the design of the room?

We repainted the whole house first, but for the room itself, we started with the crib [from Babyletto], mainly out of necessity. That’s of course because the baby was coming no matter what, and we wanted to be prepared, so that’s one of the first pieces of furniture we got. We chose a relatively standard, all-white crib before we had any clue what we would do with the rest of the nursery, but it felt a little limiting for design inspiration. While it all worked out in the end, if we did it again and had adequate time to fully design the space before purchasing pieces, I might have chosen a different finish for the crib. Then again, the baby will only use it for a few years, so I wasn’t too worried either way.

What were some of the must-have design elements in the room?

In addition to the crib, the armchair [Sven by Article] and pouf were must-haves, as both pieces we chose in lieu of a traditional rocking chair and foot stool. For the armchair, we wanted something big enough for both me and my 6’6″ partner, who took care of the baby’s night feedings. Not only does he need more room than me to sit comfortably, it also turned out that our baby wasn’t really into rocking anyway. It’s a unique design from direct-to-consumer company Article, and the position of the cylindrical cushions on either side also made it easier for me to hold the baby in my arms for long periods. Other benefits are that we can actually sit in it together, and because it’s leather rather than cloth, it’s very easy to clean. Milk inevitably will spill! The chest of drawers was also a must-have for functionality since we needed a diaper-changing area.

What challenges did you face while designing the room?

The biggest challenge was creating enough storage space in a standard sized room with fairly limited built-in options. It turns out babies have a ton of stuff! Without several obvious places to put away those things, the room can become messy quickly. At the same time, we wanted to leave the center of the room open and uncluttered for the baby to have plenty of room to play. The bench with storage bins helped a lot, as well as installing a new California Closets unit. Although I suspect as the baby gets older, we’ll have to rethink this to expand storage for things like books, toys, and clothing, which somehow continue to multiply.

What are some of your favorite things about the nursery?

My absolute favorite thing about the nursery is the wallpaper by La Maison by Pierre Frey. I am part Indian, and I wanted something in the room that reflected the baby’s heritage, and this ended up being the perfect expression of that. We also wanted something colorful for the baby to look at for visual development. I love the closet, as well, and especially the baby hangers. In addition to being miniature and adorable, they make it a lot easier to organize and keep track of clothing, which feels like a never ending task because she’s so growing fast.

What features did you want to take advantage of in the room?

It turns out that the room we chose for the nursery has one of the best views in the house. From one of the windows, you can watch the sun set across San Francisco and out into the ocean. We made sure to situate the armchair so we could still enjoy the view while feeding the baby, and it has made it much more likely that we will casually lounge in that room, too. The natural light also pours in throughout the day, another reason we wanted to keep the middle of the room feeling open but cozy.

What design element did you use in the room that you feel readers should try?

Mixing patterns. I was a little worried about clashing patterns and colors, especially as it pertained to the wallpaper and carpet, but I stepped outside of my comfort zone and tendency to over-match elements, and I think it turned out well. At the end of the day, we were motivated by the fact that patterns and contrasting colors are good for a baby’s development. While researching design concepts, I saw so many nurseries with neutral colors, including lots of whites and grays. That can look really pretty, but it just isn’t ideal for a baby, so we were really trying to avoid that.

What do most people say when they see the nursery?

“I want to live in there!” Adults love it, too.