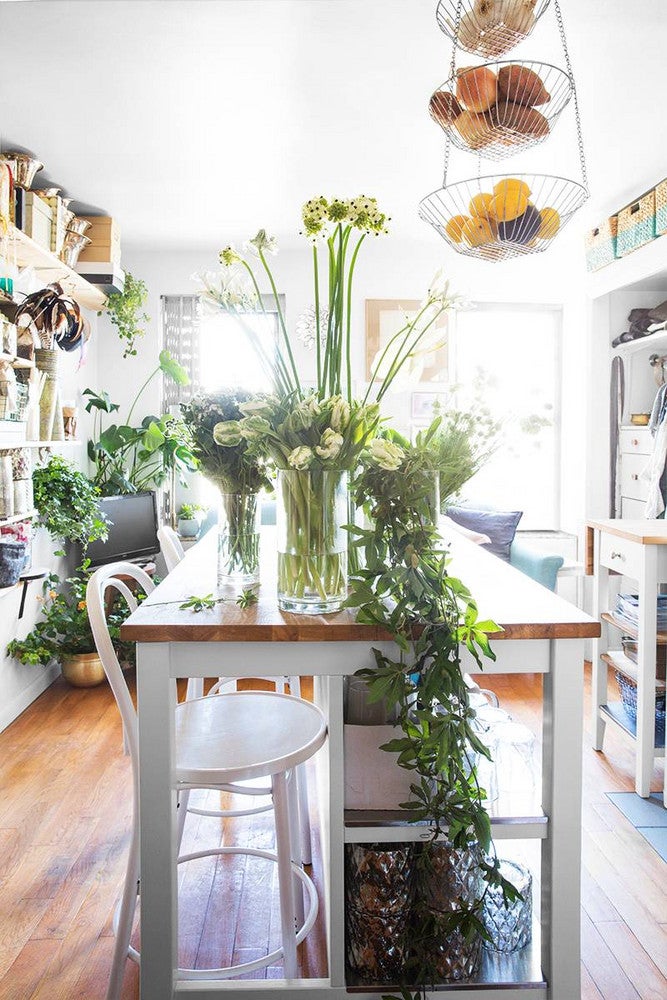 Back in April 2015, this apartment was popular for all the wrong reasons. It was nicknamed the “sad shower in the kitchen” apartment by the media.Gothamist called it the “unicorn of bad NYC real estate” while Curbed wrote, “The “bathe where you eat/live/sleep” aesthetic is not unheard of in New York, but this may be the most pathetic iteration.”

None of this deterred brooke lucas Creative Director of The Wild Bunch, a downtown NYC floral and event design company, who works with cool clients like Tictail (whose space we adore), Dudley’s, and The Rug Company. In case you were concerned, the apartment is now a full of life and personality, the whole shower-in-the-kitchen thing an afterthought. Keep reading to learn more about Lucas, her flourishing business, and how exactly this Aussie ended up in a particularly tiny one-bedroom apartment on the Lower East Side of Manhattan.

CAN YOU TELL ME A BIT ABOUT HOW YOU STARTED THE WILD BUNCH?

It just sort of started. I was freelancing as a floral designer for other companies, and I got a call from Lucky Magazine (they found me through a friend of a friend) wanting flowers for an event. I had to start a business so they could pay me! The early days were all like that, little word-of-mouth jobs, friends weddings. It’s only been the last year that I’ve been full-time on The Wild Bunch.

WHAT INITIALLY INSPIRED YOU TO GET INTO FLORALS?

I wanted to do something creative and work with my hands. I was a copywriter at the time, and everything I made was on a computer. I wanted to create something in the real world.

HOW OFTEN ARE YOU WORKING OUT OF YOUR APARTMENT?

Every day! Even if I don’t have flowers going out, there’s admin and prep to do. On big jobs I work out of rented studio space in the Flower District in Chelsea, but I’ll still do a few hours work at home, usually in the wee hours of the night!

WHAT’S YOUR FAVORITE MEMORY OF DECORATING YOUR SPACE?

Being finished?? To be honest it was all pretty overwhelming—when you’re in a small space and you do the littlest thing, like paint a chest of drawers, it takes over the whole space. Sometimes I would be in such a mess I wasn’t sure I would ever find my way out! But now I feel like the hard work is done. I’m sure I’ll change things, but I think the foundation is good.

HOW DID YOU END UP RENTING THIS “SAD SHOWER IN THE KITCHEN” APARTMENT? HAD YOU READ OR HEARD ABOUT IT BEFORE YOU TOURED IT?

Looking back, I actually had seen that article, but I didn’t remember it when I saw the apartment! I was pretty desperate—as most people are when they’re apartment hunting! I had nowhere to live and as someone who had only been in NYC for three years and was self-employed, I wasn’t a very attractive tenant! And I love Orchard Street, I’d lived on the street before and wanted to move back. As soon as I saw it, I knew it was my apartment. The shower was such a small part of it.

I LOVE THE PINK AND PALM PRINT NOW COVERING YOUR SHOWER. HOW EXACTLY DID YOU PULL THAT OFF?

I bought a shower curtain from H&M Home, and I stuck it on with Modge Podge. I was trying to get the look ofMartinique wallpaper, but the background of the curtain was really white and it looked really cheap, so I painted all the negative space pink.

WHAT WAS THE FIRST THING YOU DID WHEN YOU MOVED INTO THE APARTMENT?

Ordered the West Elm couch. Actually I watched it everyday until it went on sale (as West Elm always does!). I had wanted that couch for ages already. The color is called eucalyptus which I think is really cute, as I’m Australian!

HOW WOULD YOU DESCRIBE THE AESTHETIC OF YOUR SPACE?

Believe it or not, I’m trying to keep it clean and somewhat minimalist!!!! I just have so much stuff, you can’t tell. Most of the furniture is white and light wood, and although I love pattern, I’ve tried to use more block colors, like with the couch and the cushions.

WHERE DID THE INSPIRATION FOR THE SHELVES COME FROM? I LOVE THE PEGBOARD, TOO!

Necessity and budget really. The shelves were the cheapest I could make. I bought the pine and the brackets from Home Depot, and put them up with an IKEA drill!!! I’ve always loved pegboard, I would love a whole wall of it. The idea of everything having it’s own dedicated space makes me so happy.

DO YOU HAVE ANY

I think the key is getting as much stuff up on the walls. All my kitchen tools, towels, handbags, pretty much anything I that can hang is up. I’ve always liked that look anyway, I think it gives character. I put my bed on risers to get some more room there (I also love having a raised bed, for some reason it feels more luxurious). I also find baskets handy to keep things organized and easy to access.

WHAT’S YOUR FAVORITE TRINKET FROM YOUR SHELVES?

Probably my books. I love books so much, the typography, the colors, the shapes, even the texture of the cover. If you put a book on pretty much anything it looks styled. They instantly make a room look warm and alive.

HOW DID YOU DECIDE ON YOUR CENTER ISLAND TABLE? WAS THAT A NECESSITY FOR WORK?

I’ve always loved a kitchen island, and since this place didn’t have any kitchen bench space, I knew I wanted to do an island that would be big enough to work on as well. I hate facing a wall when I work or even cook, I like to look into the room. It works as a desk, a dining table, a work bench. And it stores all my kitchen necessities that I can’t hang, like plates and glasses. I definitely designed the space around it.

WHAT INSPIRED THE SHELF ABOVE YOUR BED? I LOVE HOW IT’S KIND OF A FAUX HEADBOARD + STORAGE.

Again, necessity! There’s no room in the bedroom for a bedside table, so I needed somewhere to put my book, phone, and water. And I love big pictures leaning on shelves, so I wanted to incorporate that too. It just made sense to follow the length of the wall.