No more case of the Mondays. 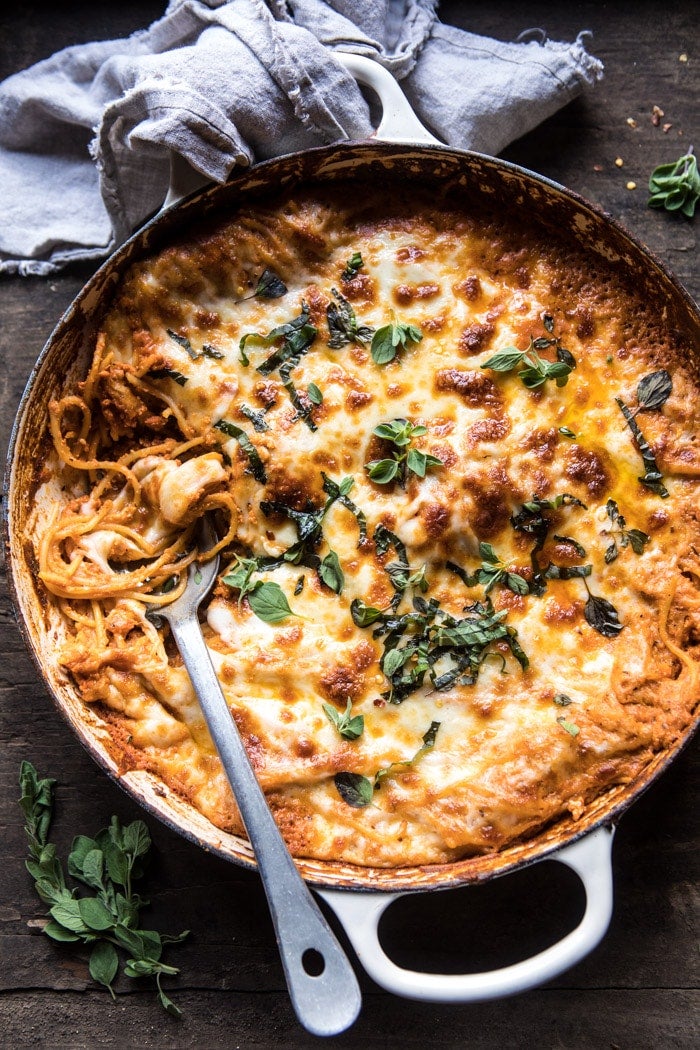 Courtesy of Half Baked Harvest

Let’s face it: Cooking isn’t exactly a task you want to accomplish after a full day. Once you’ve read and replied to dozens of emails, attended meetings, and plowed through an endless to-do list, cooking dinner feels like a chore, and that’s not even including washing the dishes afterward. On those nights, it might seem easier to forgo whipping up something at home altogether. Don’t think that. In the amount of time it’ll likely take for an overpriced meal to arrive on your doorstep, you could’ve made one of these one-pan recipes instead (and for much less money).

We gathered nine one-pan recipes that are easy to accomplish when you’re tired, and all can be completed in an hour or less. From spaghetti pie and orzo with shrimp to adobo chicken and curry lentil soup, these recipes prove how much artistry can go into a single pan without much effort. Since every meal can be made after a tough day, we’ve included decadent flavors that’ll help end the night on a high note. After one bite, you’ll be glad you took this one-pan route.

Picture this: It’s Monday. You’ve just worked a long day and all you want is a little comfort. Say hello to this one-pan cheesy spaghetti pie recipe from Tieghan Gerard at Half Baked Harvest, which is filled with the heartwarming flavors of spaghetti, marinara sauce, parsley, basil, ricotta, and mozzarella. Combine it all into an oven-safe saucepan and dinner is served with 10 minutes of prep time.

Heidi Larsen at Foodie Crush makes a creamy chicken and rice casserole inside a single pot. Chopped onion, minced garlic, dried thyme, and diced carrot flavor chicken broth and evaporated milk alongside the namesake ingredients for a classic feast. Peas are added at the end for more color and flavor.

Tiffany Azure at Le Creme de la Crumb serves up this easy Asian-inspired chicken and veggie ramen recipe specifically for busy weeknights since it can be made in all of 25 minutes. Ramen noodles and chicken breasts are mixed with snow peas, broccoli, red bell peppers, and mushrooms. They are then cooked in spices and herbs. Once everything is ready, a bowl is served with chopped green onions on top.

All the fresh colors and flavors that are known in Mediterranean cuisine can be found in this creamy chicken pasta recipe from Holly Erickson at The Modern Proper, and it all comes together in 30 minutes. She cuts boneless, skinless chicken breast into two-inch pieces and combines it with capers, parmesan, fettuccine, herbs, and spices. Thin slices of lemon pop against the other ingredients.

If you’re looking to make something that has the appearance of difficulty but none of the stress, then look no further than this other garlic butter creamed spinach salmon one-pot recipe from Half Baked Harvest. Gerard adds seasoned salmon fillets to a pot, and then once they’ve been seared, removes them to cook spinach in butter, shallots, garlic, herbs, and cheese. It’s as good for a busy weeknight as it is for a casual dinner party.

Orzo With Shrimp and Zucchini

Bringing together Mexican flavors and fresh ingredients in one easy-to-clean pot is the goal of this orzo with shrimp and zucchini recipe from Foodie Crush. Frozen shrimp, dried orzo pasta, zucchini, and canned tomatoes are cooked with shallots, limes, cilantro, and cinnamon to produce a meal that looks and tastes much more intricate than what’s required behind the scenes.

Who says you have to save steak for the weekends? If you’re feeling like cooking this for a weekday feast, then follow this garlic butter steak and potatoes recipe of Tiffany Azure at Le Creme de la Crumb to make the whole dish in one single pot. She flavors and sears petite steaks and then uses the same pot to cook potatoes in garlic powder. The steak and potatoes are then transferred to an oven to finish cooking and topped with garlic butter.

Natalie Mortimer at The Modern Proper also creates a bold presentation in this one-pot recipe for coconut curry lentil soup, and it’s much more flavorful than classic iterations of the meal. Thanks to coconut milk, chicken stock, sweet potatoes, minced garlic, curry powder, and ginger, the dried brown lentils are given a depth of flavor that’s irresistible with every spoonful. You’ll want to soak up every last drop with bread.

This Filipino chicken from Half Baked Harvest makes the case for an under-the-radar type of seasoning: adobo. This Filipino staple—which is made with soy sauce, brown sugar, and garlic, among other ingredients—is a beloved part of this country’s cuisine. When you try it in this one-pot meal, you’ll see why. Once the chicken is served, it can be layered on top of rice.

This story was originally published in January 2016 and has since been updated.

What Chefs Make When All They Have Is a Box of Pasta Chow Down: 12 Healthy Snacks for When You Need a 4 pm Refuel 12 Healthy Salad Recipes on a Mission to Eradicate the “Sad Desk Lunch”