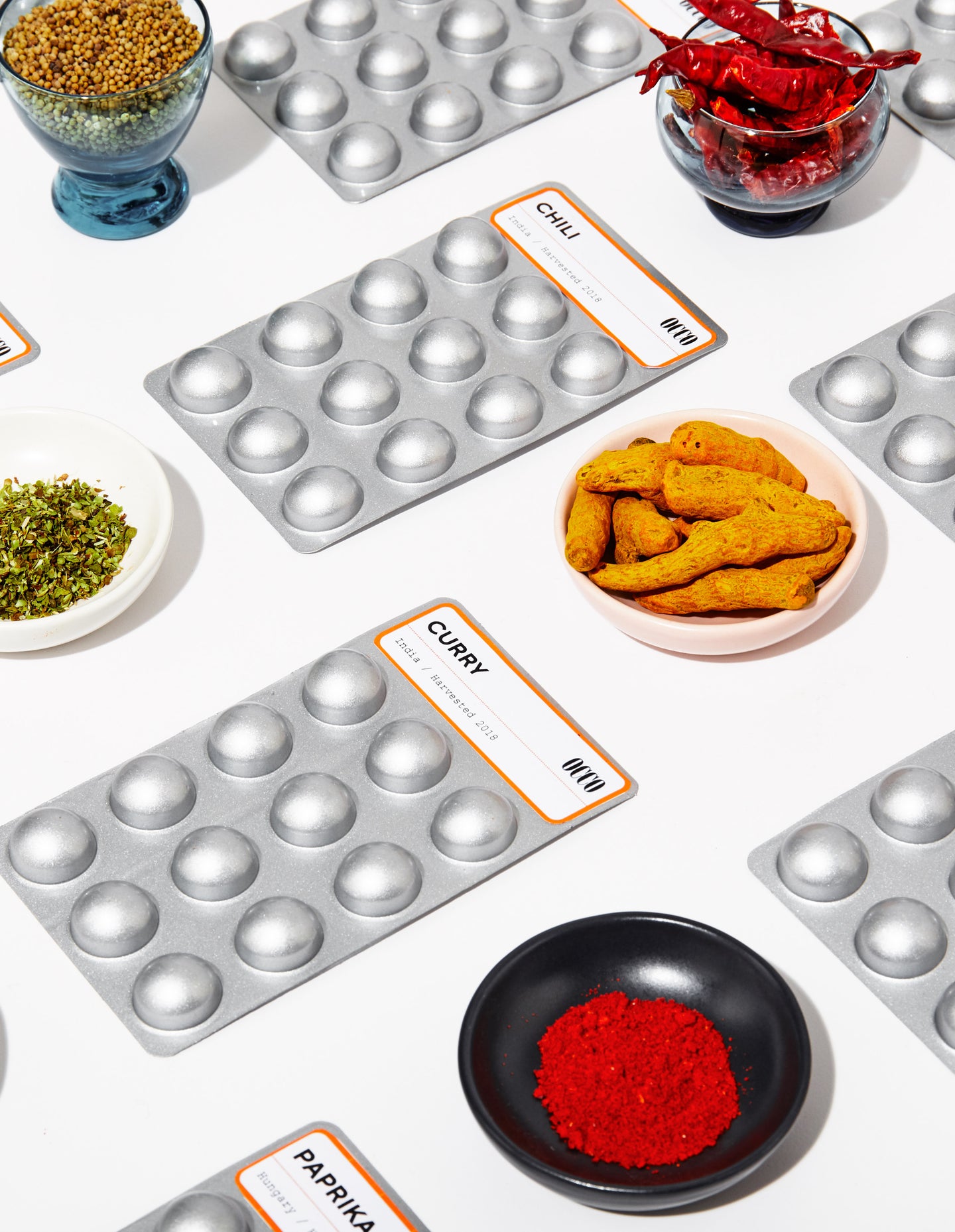 The seed for Occo was first planted six years ago when Lisa Carson was meandering the spice aisle in search of affordable seasoning.

“I wanted to try new foods like Indian and Thai and I was super frustrated that spices were so expensive,” she says. “I was just a single girl living off a waitress’s salary in Jackson Hole, Wyoming, and I would go to the grocery store and find myself shelling out $20 for a spice that came in a huge jar. It just wasn’t functional.”

Like most newly minted college graduates, Carson wanted to cook more often and cook with more range. The only thing standing in her way? The $15 jar of chili powder and the oversize bottle of oregano taunting her from her spice cabinet.

“That was a pain point that sat with me,” says Carson. “I remember acutely wishing that there was a smaller, almost bubble wrap–like, product that I could buy to just get a teeny bit of spice.”

Carson found her fix a few years later when she quit her job in digital marketing and teamed up with Connie Wang to found Occo: a single-serving spices startup that delivers freshly harvested ingredients in preportioned, presealed packs made from recyclable aluminum. The company is set to make the final leap from Kickstarter to direct-to-consumer by this summer, however, Occo will begin to offer its 12-card Essential Collection and five separate Mini Collections in a presale later this week.

Disrupting one of the oldest supply chains in the world is no easy undertaking, but Occo’s end result makes the process look seamless. The space-saving genius is, of course, the blister pack sheets. Each of the sealed bubbles comes perfectly portioned as 1/4 teaspoon to ensure that none of the product ends up going to waste.

“One of the many reasons we chose aluminum is because it’s a perfect gas barrier. Most plastics are absolutely awful barriers, which is why a bottle of water has an expiration date,” says Carson. In other words, you pay for what you actually use, not what goes bad in the jar.

In the spirit of the plastic straw revolt of 2018, the pair saw product design as an opportunity to lessen their company’s footprint on the earth. “When an aluminum food or beverage product is recycled, it can get back on the shelves as a new product in as few as 60 days,” she says.

Before Carson and Wang officially joined forces, Carson spent two months abroad in search of organic and ethical suppliers. In Hungary, she found paprika; in Vietnam, coriander; and in China, ginger.

“We wanted to have a deeper understanding of where these products come from and how we could get our hands on product that has been harvested within the past year,” says Carson, noting that the average bottle of spice you grab off the shelf had likely been sitting in a warehouse in Europe for over a year before it made its way stateside for bottling.

The core collection—or as Carson calls it, the “spice dream team”—encompasses 12 essential spices: basil, chili, paprika, curry, fennel, oregano, cinnamon, nutmeg, cumin, ginger, mustard, and coriander. The purpose of this starter pack (which is expected to retail for $40) is to complete and complement any basic recipe one might encounter in a cookbook.

There are also “Mini Collections,” which include frequently used starter spices like garlic powder, black pepper, and onion powder. “It’s an addendum for the frequent cook,” says Carson. “We’re realistic that there are some spices that most people will get through in three to six months.”

Carson and Wang hope to add three more 10-card collections to their lineup, ranging from intermediate to bespoke. The idea being that new chefs can stock their spice cabinet right out of the gate, while more adventurous cooks can snag 10 special occasion spices for the price of one.

“I’ve been burned looking for culinary lavender before,” laughs Carson. “It only came in a large jar, and it’s the type of thing you might only use once or twice in the span of 10 years.”

The pair is also looking to launch a customized stand that can contract and expand as users change up their spice cards. Soon, cluttered cabinets and crowded racks will be a thing of the past.

“I can’t tell you how frustrating it is that my ‘spice pantry’ is above my stove. I’m always reaching up there and not able to see the spices. We’re looking to take that spice pantry and add some organization to it but also make it beautiful,” she says.

If you’ve ever wanted to make pad thai for one in your shoebox apartment, these cleverly designed packs will spark serious joy.

Every One of These Cooking Hacks Are Basically Genius