It also has the biggest hotel rooftop bar in the city. 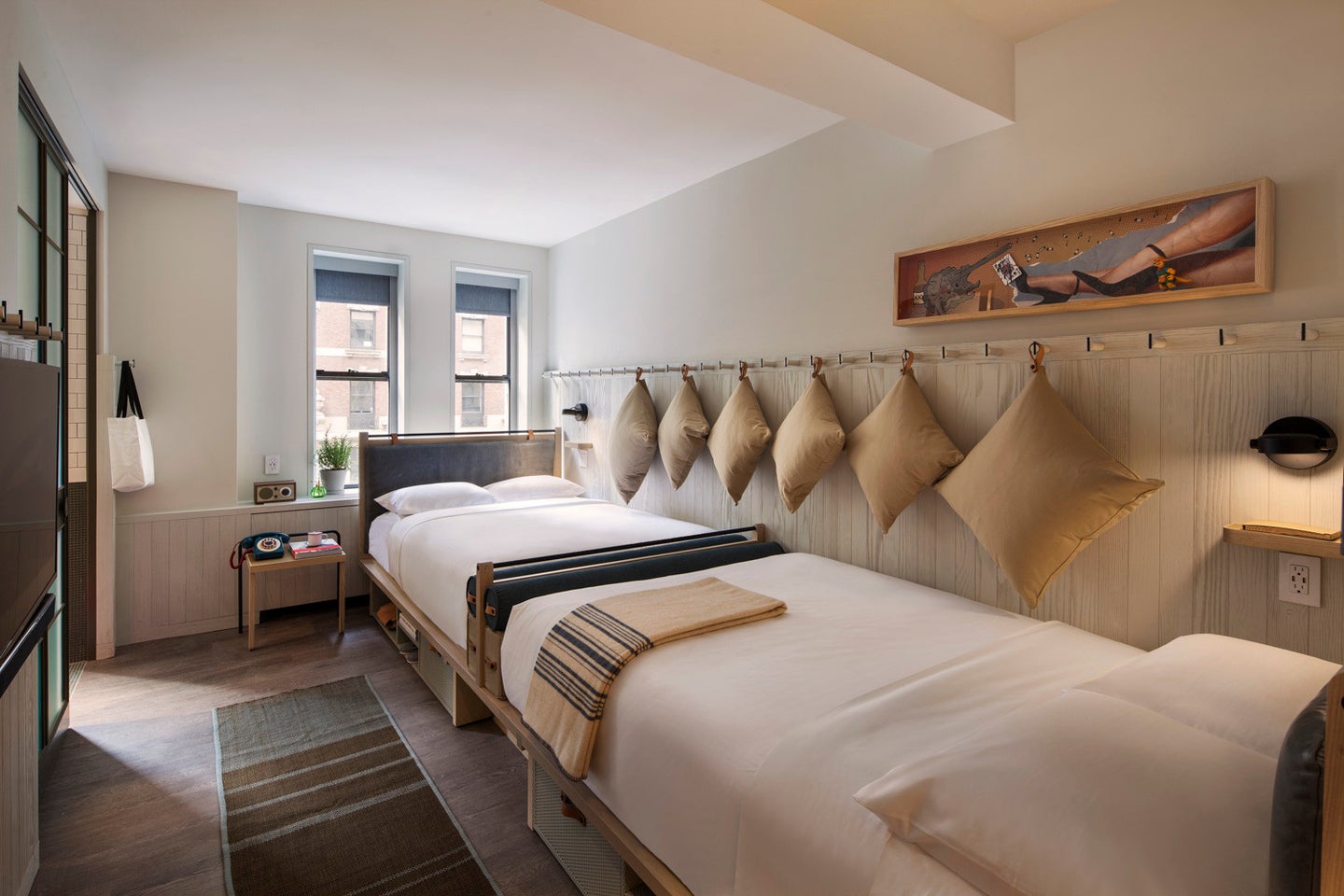 NYC is expensive—and that’s a fact locals and tourists alike have to come to terms with. But now, thanks to a brand new design-driven hotel that puts affordability at the forefront, traveling to NYC doesn’t have to cost so much.

Moxy Times Square is a just-opened hotel under the Marriott International umbrella—although its fresh and young design makes it feel like anything but a chain. And with rooms available starting at just $139 a night, you can get a boutique hotel experience at a fraction of the cost.

The newly-imagined Moxy was built on the site of the historic 1907 New Mills Hotel. Lightstone Group acquired the building in 2014, and transformed it into a hotel specifically targeted toward millennials. After recruiting architecture firm Stonehill & Taylor to create 612 guest rooms and restore some of the original features—such as relocating the entrance to its original 36th street location—they tapped Yabu Pushelberg for the design of the guest rooms and lobby, TAO Group for the food and drink, Rockwell Group for the design of the restaurant and bar, and New Stand for the retail.

“We were determined to prove that affordability doesn’t mean having to sacrifice style or comfort, and sought to create a place that would attract an authentic mix of locals and visitors,” says Mitchell Hochberg, Lightstone Group Principal. “Yabu Pushelberg’s riff on ‘urban camping’ inspired the design of visualized spaces, with bedrooms that are snug, but have creature comforts and connections to nature.”

The bedrooms are definitely snug—at first glance, certain guestrooms look like upscale hostel rooms, thanks to their bunkbeds—but the attention to detail puts the decor on par with any grander hotel room. Inspired by the elegant functionality of ryokans (traditional Japanese inns), Pushelberg took an artistic approach to simplicity by creating rooms that are warm and inviting. Leather, canvas, and wood materials provide an organic feel.

Moxy’s offerings go above and beyond those of a typically affordable hotel, too. Geared toward “savvy New Yorkers,” the hotel brings in guest DJs, popup trunk shows, and guest speakers. There’s even a rooftop fitness series for the exercise-inclined that features the trendy modelFIT studio.

And then, there’s the bar: Magic Hour, the largest indoor/outdoor, all-season hotel rooftop bar in NYC, is a “modern spin on an amusement park”—and a personal favorite of Hochberg’s. “We have two separate outdoor areas: The East side overlooks the Empire State Building with elegant garden party fixtures, while the West side is more overtly carnival-esque, with one seating area located on a rotating antique carousel,” he says.

“We need it to be attractive to locals, of course, but also comfortable for people visiting from Denmark or Delaware,” adds TAO Group co-founder Noah Tepperberg. “We made Magic Hour more about attitude than exclusivity. If you’re here to have fun, no problem!”

The menu includes takes on carnival fare (such as Dippin’ Dot Shots) and the option to book a $99 “Crashpad” for the night, so having fun at this trendy new hotel is pretty much guaranteed.

Want to test out Moxy for yourself? Head to moxytimessquare.com for more information.

A Boutique Seattle Hotel That Puts the City at the Center This Hotel Group Only Targets College Towns, and Here’s Why The New Spot That’s About to Take Over Your Instagram Feed