These Are the Most Haunted Cities In America

Watch out for the goosebumps. 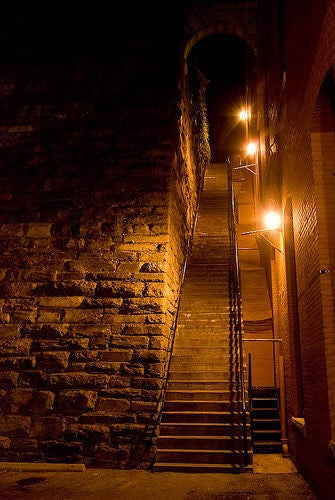 While some towns are famous for their plethora of art museums or the way they cook their pizza, other cities across the country are known for their sinister pasts. No stranger to the paranormal, these creepy cities boast horror-filled histories that residents still can’t seem to shake—from lingering souls that won’t leave the hotel room to grisly tales of torturous deaths.

Don’t believe in ghosts? Here are five hair-raising destinations that might just change your mind.

One of the upper midwest’s eeriest cities, St. Paul boasts a number of freaky and frightening spots worth exploring. Just take the Wabasha Street Caves: Once used during the Prohibition as a drinking hideout, the caves are said to be haunted by three gangsters who were murdered and buried there almost a century ago. We’re going to go out on a limb and suggest that these are ghosts you won’t want to provoke… should you dare visit after dark.

Here’s another destination where the ghosts of old-time mobsters lurk around every corner: the Windy City. Scarred by the crimes and killings of Al Capone and other famous tragedies—like the Chicago fire of 1871 and the sinking of the SS Eastland in 1915—Chicago should be at the top of any thrill-seeker’s travel list. If you’re looking for a cocktail to calm your nerves (but don’t want to miss out on a scary adventure), head to the popular Castle Chicago: It was once a hospital that went up flames (and most recently a nightclub). Workers in the building have reported a number of mysterious happenings, like people being pushed down stairs or over railings by an invisible force. Have the chills yet?

With its particularly violent past, it’s no surprise that New Orleans is revered as one of the country’s spookiest cities. Forget Southern comfort and soul food—this town is brimming with famous tales of tortured souls. Noteworthy spots include The Hotel Monteleone—a family-owned establishment that is home to a number of permanent residents and children who haunt the halls—and St. Louis Cemetery No. 1, the oldest cemetery in the city, where the queen of Voodoo, Marie Laveau, is presumed to be buried. If crumbling crypts and unwelcome guests don’t make your palms sweat, we don’t know what will.

A hot spot for the supernatural, this famously spine-chilling town in the middle of Pennsylvania hosted the bloodiest battle of the Civil War. And it’s not just the 50,000-plus dead, wounded, and missing soldiers that haunt the locals—deceased civilians are apparently hiding out, too. At the National Soldiers Orphan Homestead, tourists may be visited by the spirit of Rosa Carmichael, the notoriously cruel and abusive headmistress who allegedly lurks in the basement.

Unsurprisingly, the nation’s capital has been continuously haunted by the spirits of politicians past (and their famous spouses). Frightening destinations include those supposedly haunted by first lady Dolley Madison, such as The Octagon House and Cutts-Mason House. Additionally, one popular landmark horror film buffs won’t want to miss is the iconic steps at 3600 Prospect St., NW—it’s from from the 1973 film The Exorcist. Wedged between a stone wall and a warehouse, the daunting stairs are especially creepy come nightfall.