This Italian Town Will Actually Pay You to Move There

The mayor is committed to restoring the sleepy village to its former glory. 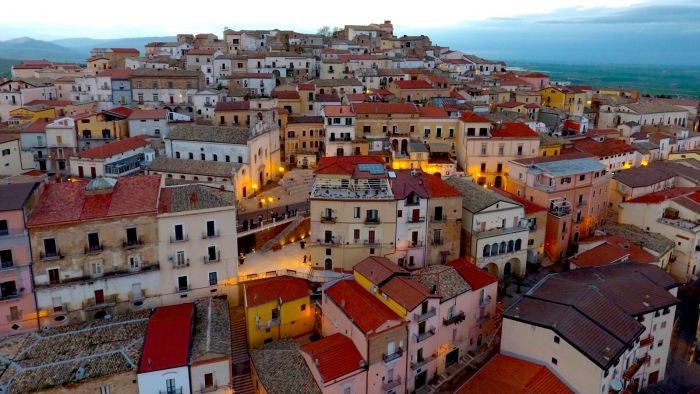 Somewhere in the crossroads of the Campania, Bascilicata, and Molise regions of Italy lies a sleepy, baroque-style town with winding, narrow alleyways—and it’s called Candela. Steeped in a history that was once so Neapolitan, it was deemed “Little Naples,” the population now eerily dwindles. After the fall from 8,000 residents at its peak in the 1990s to now just 2,700, the mayor has resorted to paying up to 2,000 euros ($2,350) as incentive for people to relocate to his beloved town. According to CNN, Mayor Nicola Gatta remembers the days of culture and grandeur in the medieval town that was once filled with bustling streets of merchants, residents, and tourists. But now, the red-roofed homes lie empty as they await new residents who will hopefully be drawn to the village, thanks to Gatta’s sweet offer. The deal is this: As long as you agree to become a resident of the town—basically, rent a home, work, and have an income of at least 7,500 euros per year (only about $8,800)—Gatta and his council will provide you with a bonus for relocating. The rate is 800 euros for singles, 1,200 euros for couples, 1,500 to 1,800 euros for three-member families, and over 2,000 euros for families of four or five people. There’s also a possibility that tax credits on waste disposal, bills, and nurseries will be provided. Not convinced yet? Aside from the town’s prime location amid rolling green hills and pristine forests, it’s only an hour’s drive away from some of Puglia’s top beaches. Candela also hosts an annual flower art festival and grain festival, as well as a food and wine tasting tour. Also of note? An exquisite House of Santa Claus exhibit during the holidays.

The people of Candela love to honor the myths and traditions of their region, so community-building bonfires and folkloric costume parties happen on the regular. And their traditional Italian food doesn’t disappoint, either: They love a good ear-shaped short pasta, served with ragu of wild boar, hare, or pheasant. But perhaps the most enticing part of the town is that the mayor’s right-hand-man reports that not a single crime has occurred in the past 20 years—practically unheard of, right?

As a new resident, you’ll also have the opportunity to take part in a one-week horseback tour from Candela to the coastal town of Pescasseroli in Abruzzo, where you’ll wander the newly-restored palazzos, streets, and piazzas in an effort to interact with the welcoming locals.   If embracing the simple life sounds like something you’d be excited about, you can apply to relocate now, in order to help the soon-to-be ghost town. Six families from northern Italy have already settled in so far, and there are another five applications in the works. Source: CNNRelated Reading: Why Mykonos Isn’t the Party Island You Thought It WasThis Is the Happiest City In AmericaWhy Seattle Is So Much More Than Just Coffee