And more strategies from a Michigan real-estate agent.

After a general contractor told them it would take close to 10 months and at least $75,000 to gut renovate their kitchen, Michigan-based real-estate agent Emily Schoen and her husband, Alex, decided to take a leap of faith. By tackling the project on their own, they figured they could complete everything in eight weeks. The couple didn’t have long to muster up the courage to start—Schoen was pregnant and expecting their firstborn by summer.

As one of the few rooms in their 1930s English Tudor that had to be revamped top to bottom, there was a lot of work to be done. At first, spending only $15,000 seemed doable, but as Schoen began placing orders for cabinetry, appliances, and hardware, the number grew—fast. “The evolution of a budget is so funny,” she says, adding they eventually settled on $30,000. Starting from scratch was exciting, she admits, but there were limits they had to work within, whether it was the 1,500-square-foot layout or keeping resale value top of mind. Here’s how the couple carefully calculated every design decision.

Stick to a Classic Materials Scheme 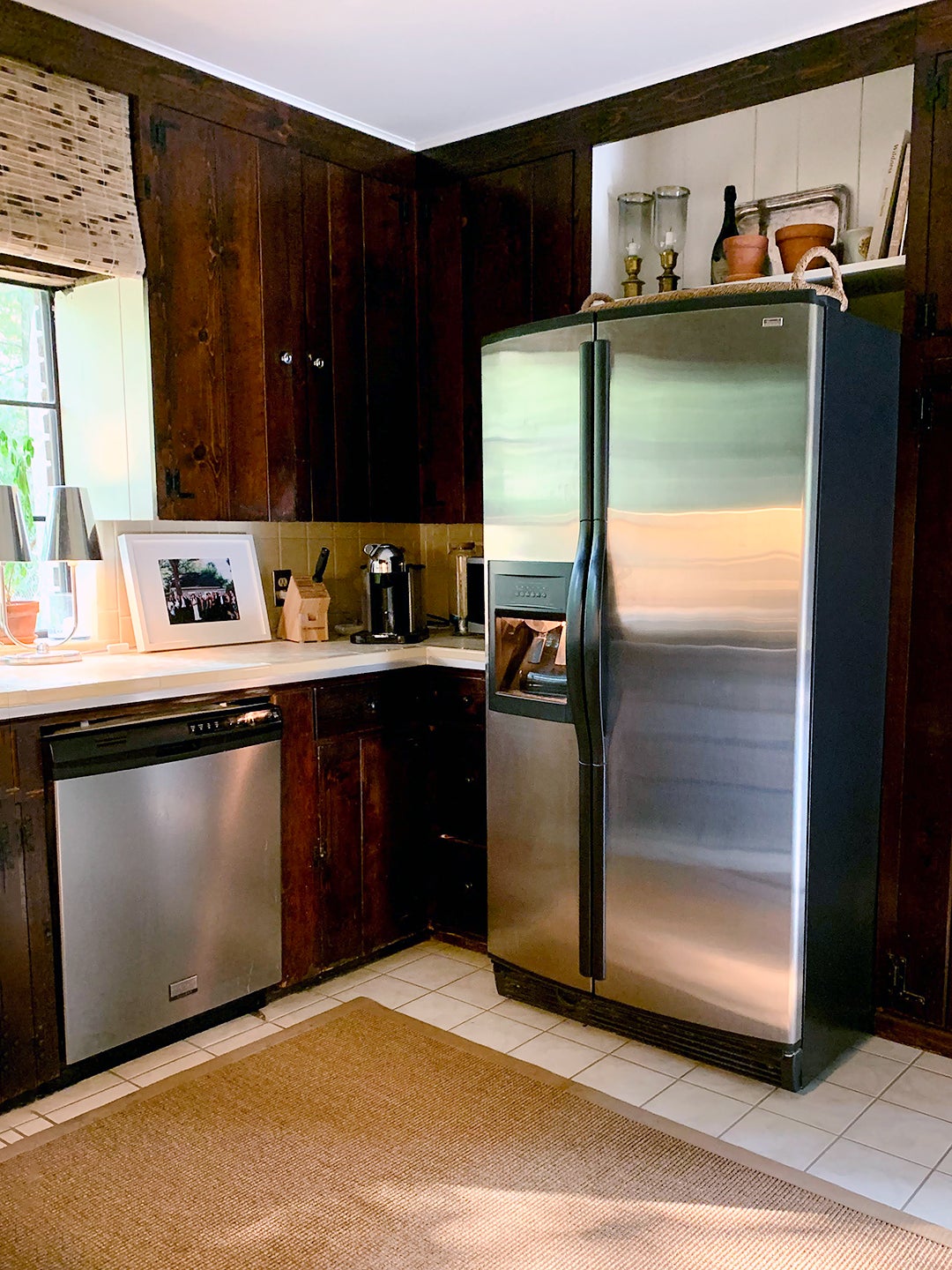 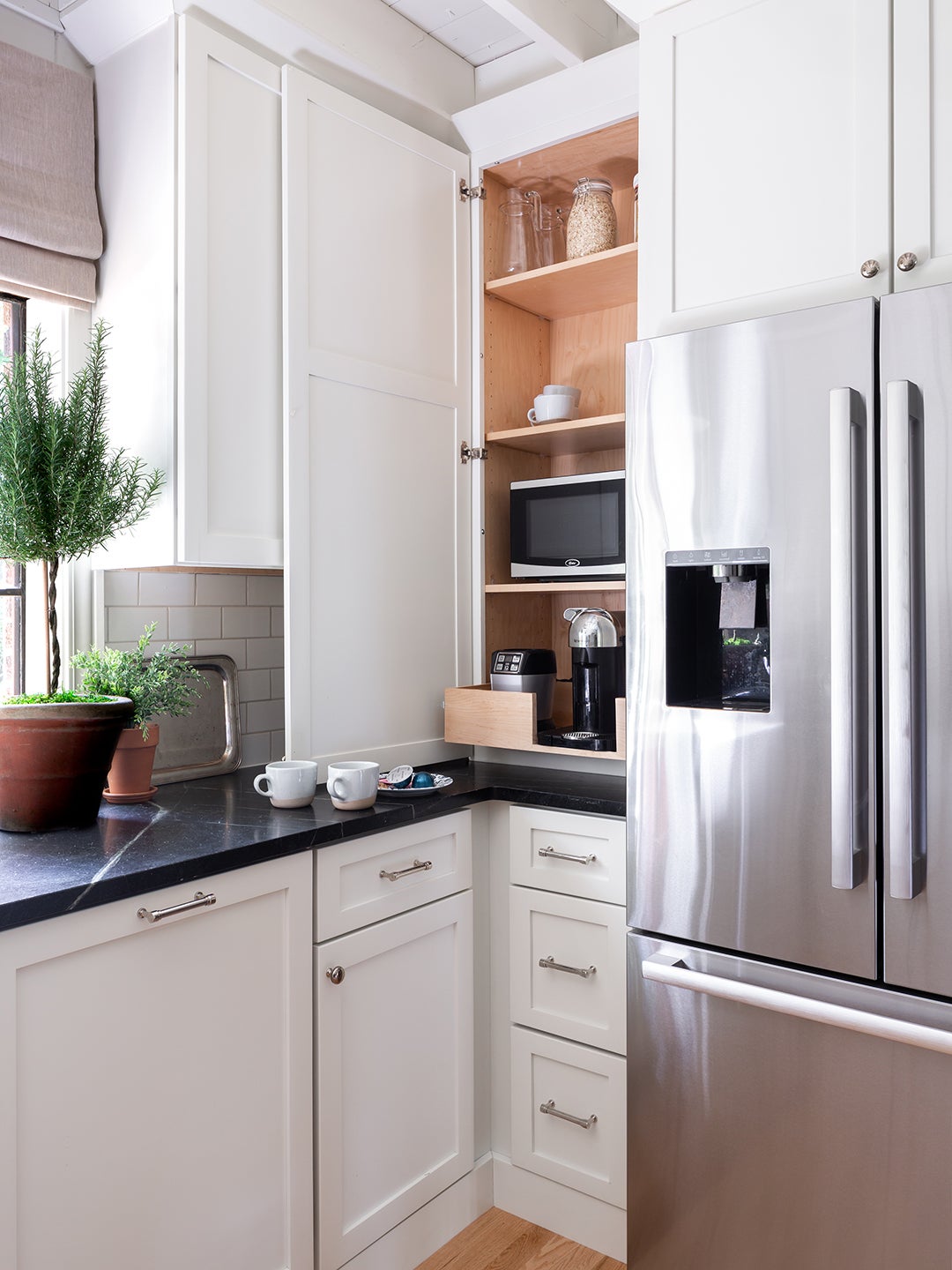 As a real-estate agent, Schoen is hyperaware of what home buyers are looking for. So as much as she loved the idea of dark green cabinets, her instincts told her otherwise. “This is more of a starter home for us. As much as it breaks my heart to say it, we will sell this house someday, so we were always thinking: Is somebody going to love this as much as us to pay for it?” she explains. Classic white Shaker cabinets, polished nickel finishes, soapstone counters, and a light hardwood floor made more sense—and kept the space bright and airy, especially considering there’s only one window. “I knew it would appeal to a lot of different people, and that was most important,” she adds. “I’m also a huge fan of Nancy Meyers movies, so I think I brainwashed myself a little bit, too.”

One of Schoen’s greatest fears was tearing down a wall and uncovering something—a rotting support beam or maybe a leaky pipe—that would throw a wrench in their plans. But demoing the worn, dark wood cabinet fronts and white tile that had yellowed with age revealed an advantageous detail: rafters hidden above the ceiling. “My husband and I were nervous about every decision, because everything is expensive,” recalls Schoen. But in that moment of hesitancy, her father made the call for her and started ripping out the drywall. “We were dodging pieces and within minutes it was down. We were like, okay, this is happening,” she says, laughing. “It really helps the kitchen not feel brand-new. I wanted it to feel quirky, cool, and old like the house that it is.” 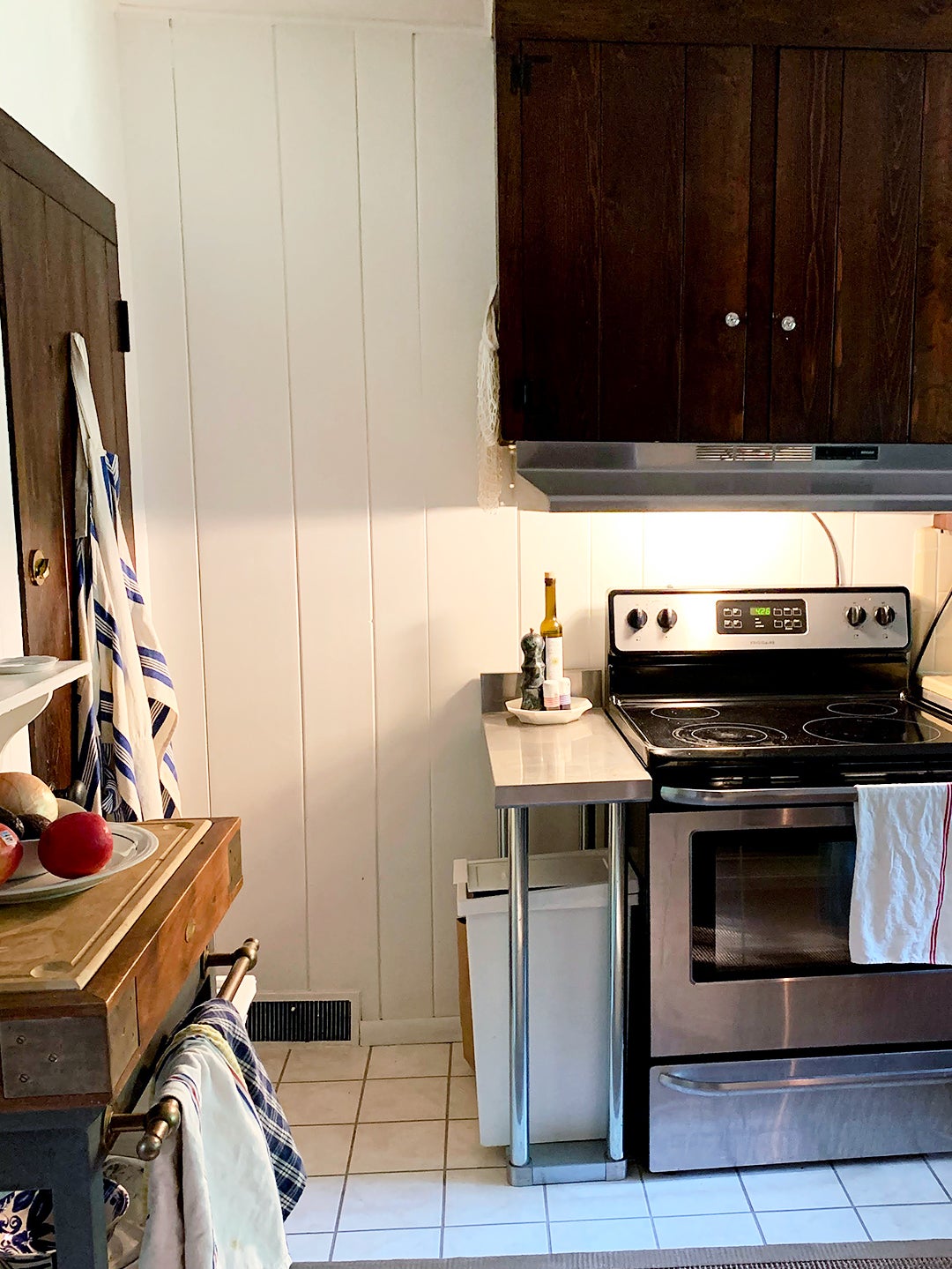 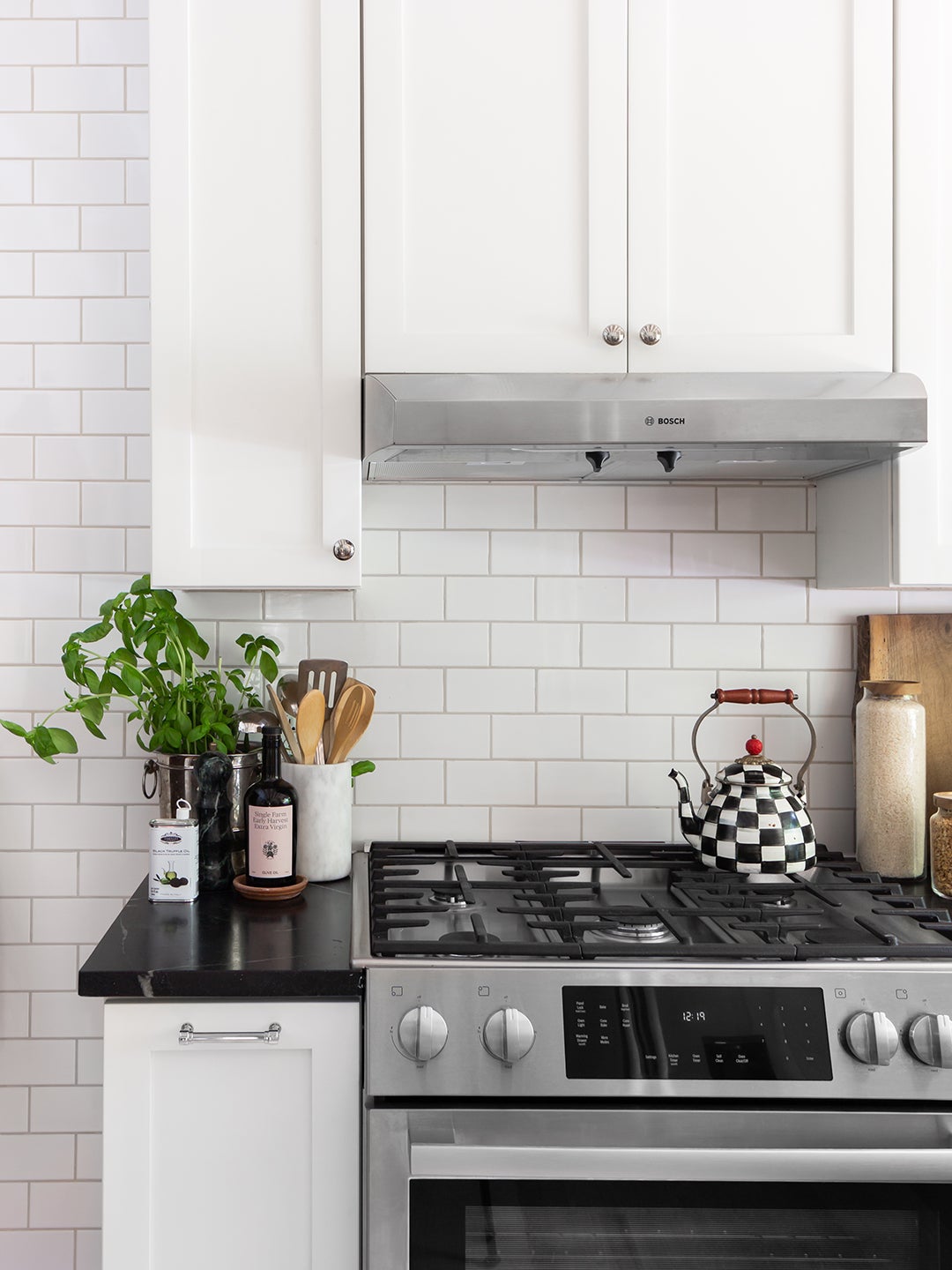 The original plan was to lay the subway tiles as a backsplash, but after watching a video tour of Waterworks cofounder Barbara Sallick’s “tile envelope” kitchen, things changed. Schoen suddenly wanted every blank surface covered in tile. Paint would have been less expensive, sure, but she went with a simple, budget-friendly option from Home Depot to keep costs down. “Luckily it’s a small kitchen, so it wasn’t a huge undertaking, and it’s just one extra thing that makes the space feel more authentic,” she notes. Soapstone, too, offers the illusion of a storied past. “I love the look and feel of real stone; it can’t be replicated,” explains Schoen. Although it easily scratches, that’s why she loves it. She’s looking forward to watching it age with the room. Both materials come together to create the look of an English potting shed or cottage, she adds.

Save by Being Strategic (and Subtle) 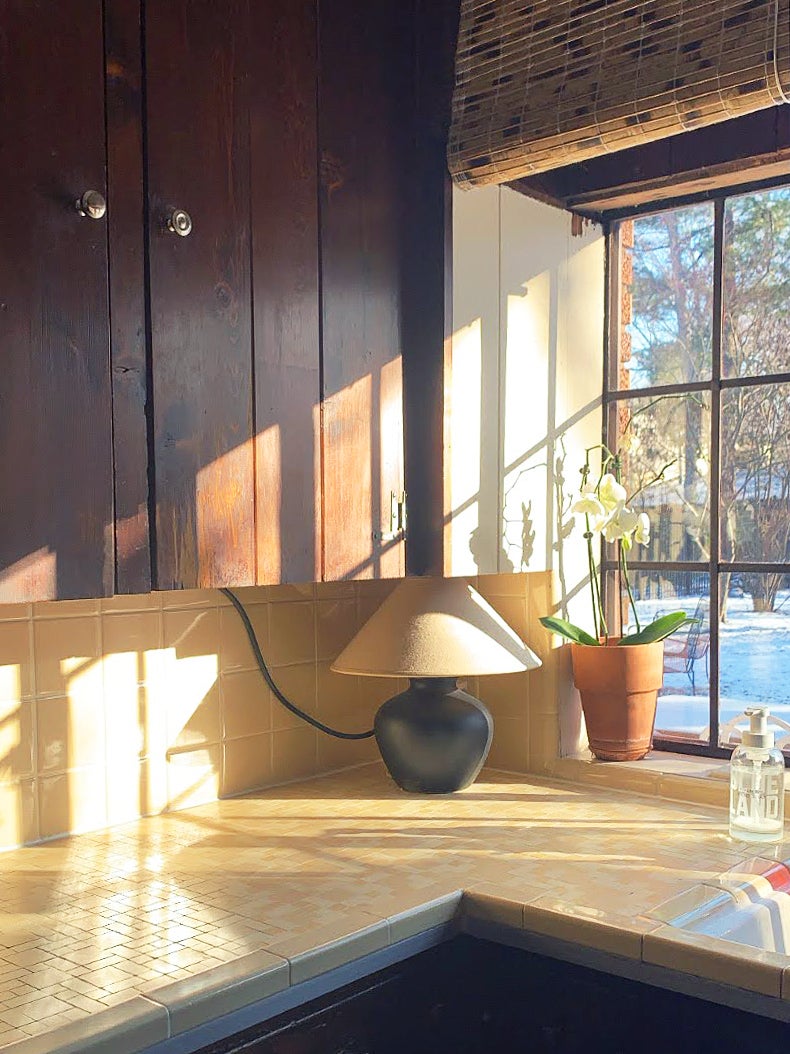 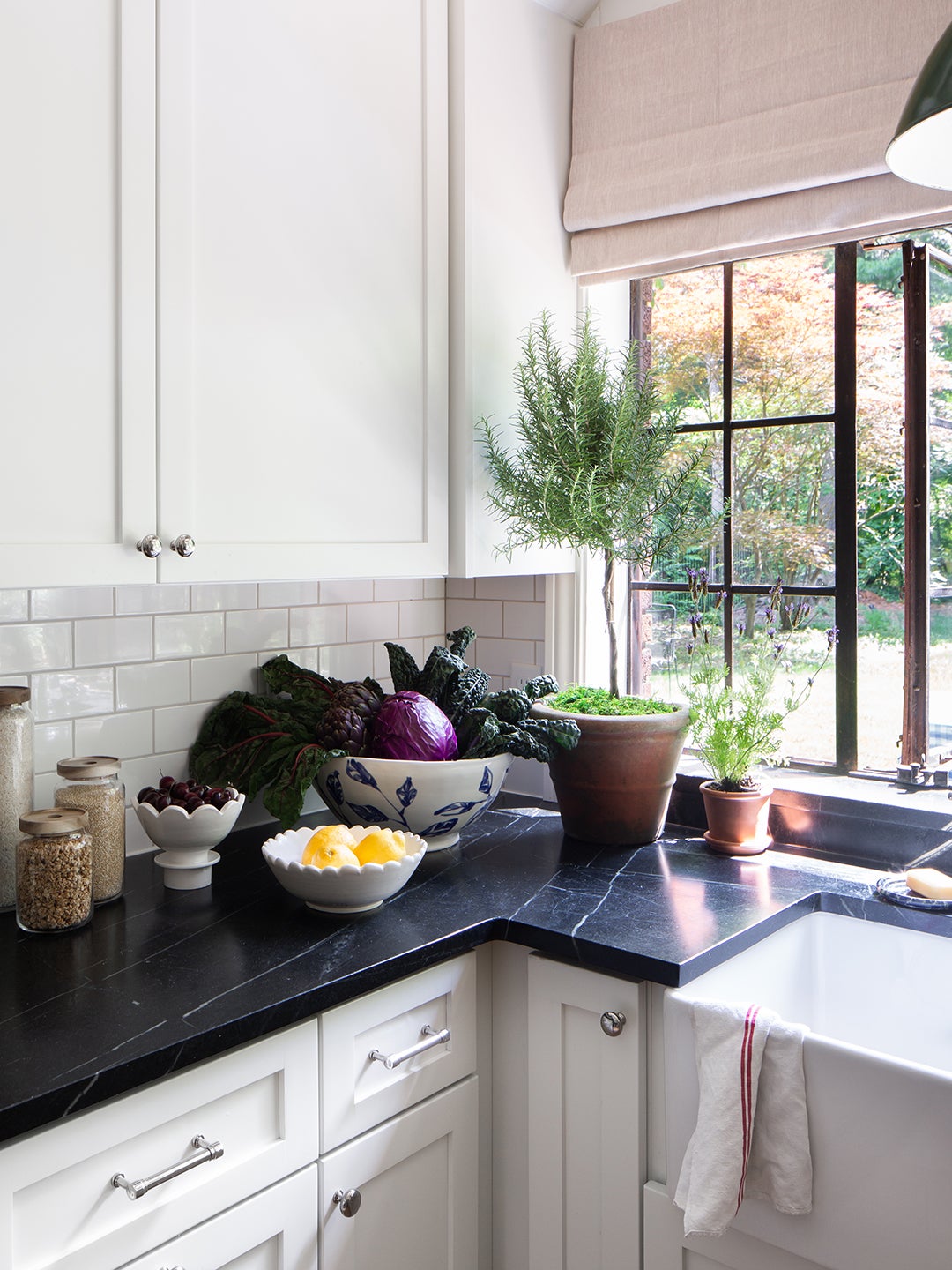 The window over the kitchen sink, looking out into the backyard, was one of the reasons the couple bought the house in the first place. There’s great sun in the morning, but things get gloomy by the afternoon, so Schoen knew she could never bring herself to cover up the glass with a regular window covering. Instead of buying a full-size roman shade from Everhem, she cheated with a shorter amount of fabric; it’s purely a decorative element. “You’d never know it doesn’t pull down,” she says. Still, extra lights were needed. Unable to do the typical cans because of the rafters, she bought $1.50 white sockets to screw half-chrome lightbulbs into, on a dimmer. “What it does is shoot light back up at the ceiling,” she explains. “When it comes back down, it’s a lot softer and creates a nice glow.”