Inside an Eclectic Studio That Transports You to Another Galaxy 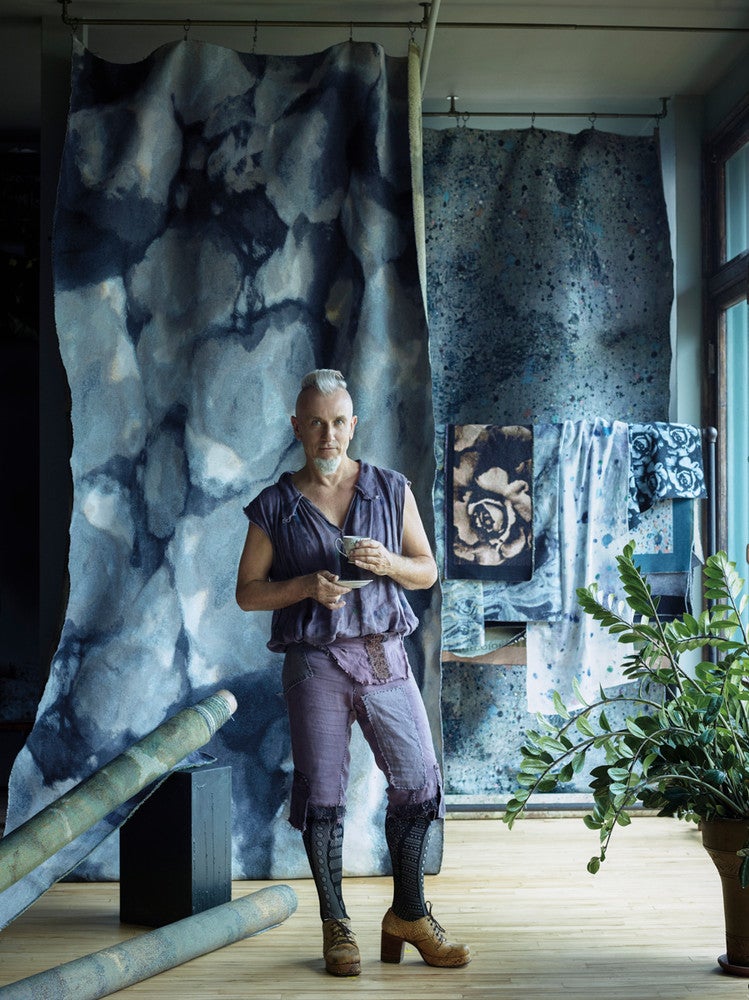 For many creative souls, honing a process and keeping a consistent practice is key to making good work. Not necessarily so for Martyn Thompson, whose template is to follow the unknown twists and turns of chance and see where it takes him. “I’ve always arrived at what’s interesting through accidental means,” says the artist.

Over the past three decades, he has seamlessly shifted from designing clothes to shooting painterly photographs for top fashion and interiors publications. Most recently, Thompson began developing a line of jacquard fabrics and home furnishings, turning his rich visual world into a tactile reality—and collaborating on such projects as a handmade wallpaper with Fabscarte and an ottoman collection, out later this year, with The Future Perfect.

Similar to his photography, Thompson plays with texture, color, and lots of layering in his clothing designs (which he wears, above), sewing and dyeing vintage French nightgowns and embellishing tailor-made blazers.

At his SoHo studio in a Beaux Arts building, where he has lived since 2003, Thompson cultivates a space as ﬂuid as his career. The light-ﬁlled loft acts as both home and showroom—featuring swathes of his textiles swirled and splattered in dove gray, inky blue, and dusty aquamarine so vivid and dense they could have been pulled from a celestial landscape. The lush background is the result of—what else?—happy accidents.

Thompson’s ﬁrst fabric collection took shape four years ago, when he started snapping a vegetable garden at night, using a light to illuminate organic forms to the point of near abstraction. He printed and rephotographed the images, creating “various removals from the original,” until a cabbage he had shot began to resemble a perfect rose—a happenstance discovery that emerged along the way.

For another series (aptly titled The Accidental Expressionist), Thompson soaked his photos in dye and bleach—adding layer after layer—and eventually transposed them onto stretched canvases. “I thought I could do something further by painting over the top, but all I achieved was to completely cover these very expensive canvases,” says the London-born artist with characteristic charm. “It went from bad to worse; then I realized the paint-splattered ﬂoor looked great, so I started photographing that…”

(The pattern also appears on a tea set inspired by his great-aunt, the mid-century English ceramist Susie Cooper.)

The living area creates the otherworldly feeling of being both underwater and in outer space. Vintage Italian lounge chairs, an accordion screen, pillows, and lampshades are all adorned in various Martyn Thompson Studio fabrics—including prototypes for his Ottoman Empire jacquards, an upcoming collection with The Future Perfect.

Allowing things to morph, ﬂow, and evolve is central to Thompson’s studio. “When I’m working through ideas, the loft can be all over the place—or other times, it’s neat and in showroom mode,” he says.

Beyond trusting his instincts for creative guidance, Thompson is a longtime follower of astrology. “There’s a lot of information in the stars, and that gives me a great idea of what I’m capable of—the potential of situations,” he explains. “Astrology is an affirmation of what I am.” (With names like Radiant Galaxy, Mercury Rock Pool, and Ripple Rainbow, his fabrics evoke a kind of cosmic wonderment, too.) Earlier inspirations, such as punk and glam rock—Vivienne Westwood; Malcolm McLaren; and his teenage idol, David Bowie, in particular—instilled in him an open attitude of  “Just do it, just try it.”

And he does. Currently in the works? A rug collection with Perennials, a new ceramic dinner set in watercolor washes for 1882 Ltd., a line of oversized totes and soft silk scarves in Thompson’s signature patterns, and a collection of workwear-style pieces in collaboration with New York designer R. Swiader, out this spring.

Thompson’s latest studio experiment is photographing images he places in a shallow dish of water. The results are always different, he says—and serendipitous. “I set a course in motion that I don’t have any control over. That’s really what is important in the creative process, and how you arrive at something new.”

The bedroom is Thompson’s hideaway, a place that stays consistent—but occasionally undergoes a refresh, like with the newly installed upholstery (launching this fall) behind his bed.

This story originally appeared in the Winter 2017 issue with the headline Mystic Man.

Inside the World of Merci, Our Favorite Paris ShopThis Eclectic Loft Is the Epitome of Brooklyn CoolMoody Blues and Antique Touches Rule in This Paris Apartment