The celeb favorite tells all. 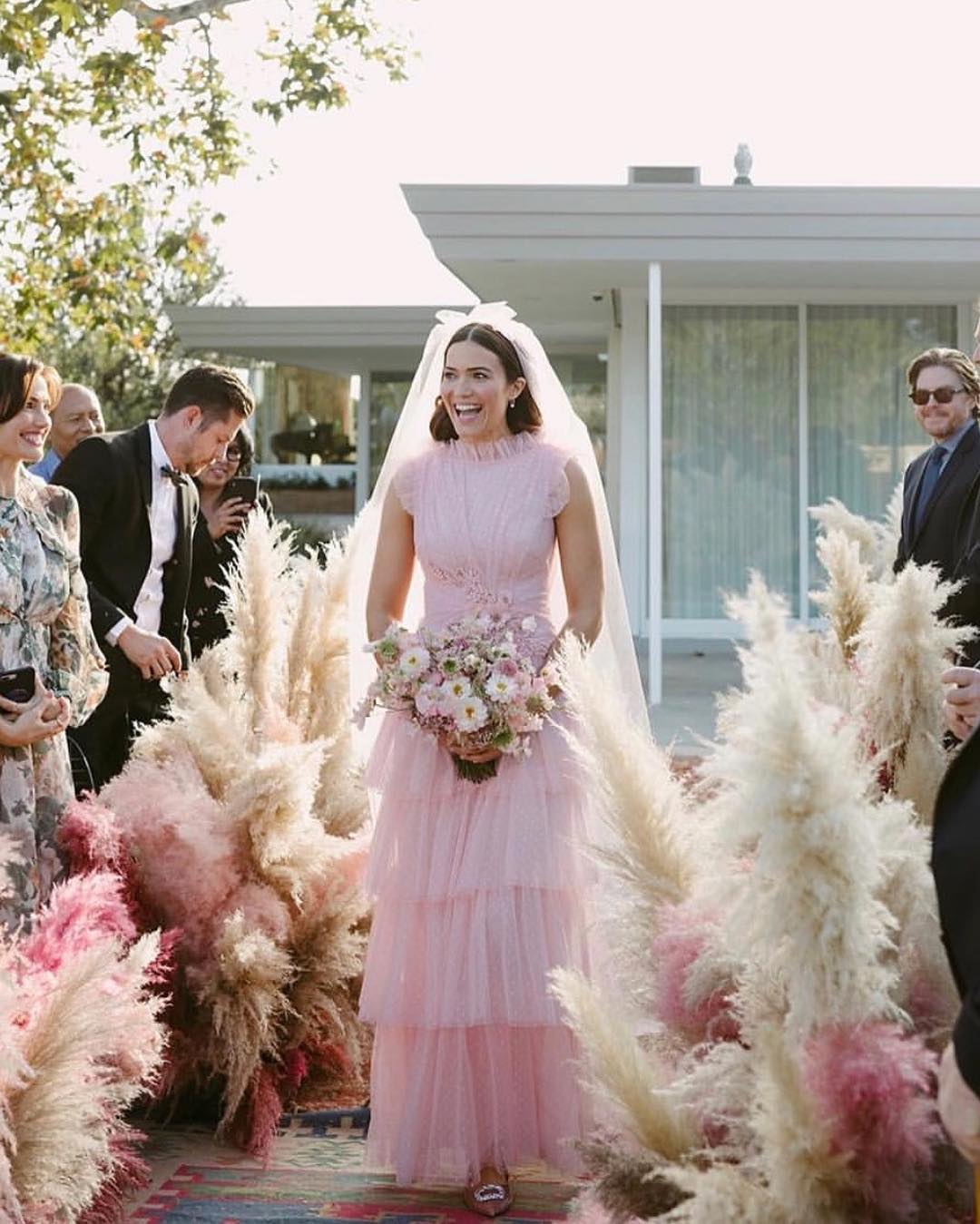 
Just when I thought I couldn’t be prouder we come across these gems . Congratulations to these beautiful souls @mandymooremm & @taylordawesgoldsmith ?? It was a dream !! Also @rodarte ? These are a repost but the stunning photos are by @kellybrownphoto ?Planning : @sarasimmondsdesign

Unless you’ve been living under a rock or have been consciously avoiding Instagram, you already know that Mandy Moore and her husband, musician Taylor Goldsmith, threw the most epic backyard wedding in November. With their dreamy mid-century home doubling as the backdrop, the pair’s bohemian celebration was the epitome of casual-cool. Along with the star-studded guest list and Moore’s whimsical, pink Rodarte gown, one detail left us in total awe: the flowers.

Felisa Funes is both a florist and an artist. Before becoming a favorite among A-list brides (Funes also created the florals for Rocky Barnes’s September wedding), Funes was pursuing her MFA in sculpture from Yale. It was only when the California native moved back to Los Angeles after a four-year stint in Berlin that she began to apply her fine-art background to florals, eventually founding her company, Of the Flowers.

Complex yet relaxed, her poetic creations are a living dichotomy of texture and shape. Funes’s eye for structure has largely been influenced by Ikebana, the Japanese art of floral arranging. “It’s a very sculptural approach. It’s more about slight expressions in movement and gesture,” explains Funes. In lieu of traditional and compact arrangements, aged blooms and overgrown displays set the stage for Moore’s wispy backyard arrangement.

“It was minimal-maximal in the sense that we worked with few materials in an impactful way,” Funes says of the couple’s ceremony space. “I’m such a fan of the Mulleavy sisters, so when I heard that she was going to be wearing a Rodarte dress, I went with it.”

Read on to learn more about how the designer dressed up the actress’s backyard, plus the one floral trend she’s excited to see more of in the New Year.


I must have cooking on my mind , but like any good stock this arch design was made better by using a base of “leftover” dried baby’s breath. The beautiful pink shade came from 60 bunches of stem dyed gypsophila. I’ve really enjoyed getting to use more of this material this year as the stigma against it slowly fades away . ? : @kellybrownphoto w / @sarasimmondsdesign for #mandymoore

On that dreamy arch…

For the base of the altar, Funes incorporated dried baby’s breath accumulated from other projects. Heavier layers of fresh baby’s breath added a sense of fullness while mimicking the breeziness of Moore’s gown.

“Her dress had polka dots and tulle, so I wanted to replicate that same lightness and airiness with the materials. I wanted it to look almost like a pointillist painting. That’s what’s so cool about baby’s breath: There’s so much detail. It’s both heavy and airy but dense as well,” explains Funes.

“For the ceremony path, we dip-dyed pampas grass in hues of pink just by leaving it in the dye bath for different periods of time and mixing it with the natural colors,” shares Funes. “Sara Simmonds, the wedding planner, chose some really pretty Moroccan rugs. It all came together perfectly.”

An addition as simple and easy as vintage rugs can make an at-home “I do” feel fancy and thoughtful.

On nailing the “boho” look…

Without feeling too crafty or casual, Moore’s ceremony space struck the right balance between bohemian and elegant. Funes’s advice for rocking the look? Edit.

“Curate the presentation through one main theme or color. There’s all this imagery on Pinterest and from around the world, and while it’s your day and you want it all, it’s important to refine your source of inspiration. For us, that was the dress. [Mandy] gave us a lot of leeway with how we dressed the space. Pairing down the colors to the pinks and neutrals helped create a cohesive look,” suggests Funes.


Ringing in the start of the holidays when weddings slow down and time with friends and family increases ? So thankful for all the opportunities this year has brought and for all the amazing clients I’ve gotten to connect with such as the lovely @designlovefest with whom this pie photo came to be . Happy Thanksgiving ? !

“I would be very happy if dried florals had even more of a presence. People often feel kind of skittish about not having everything be fresh, juicy, and bountiful, but I think it would be cool if people in 2019 stepped away from the fresh and went with things that took longer to fabricate,” she shares.

The bonus? Dried florals give florists creative leeway. One of the challenges of the job is time sensitivity. “There are so many people from Japan and Holland who are drying flowers in all these really cool ways. I think it’d be fun to see more of that in both the winter and spring months,” adds Funes.

How To Choose The Right Flowers For Your Wedding

These Succulent Centerpieces Are the Ultimate Alternative to Wedding Florals