A fantastical mural greets you at check-in.

By
Julie Vadnal
photography by
The Ingalls 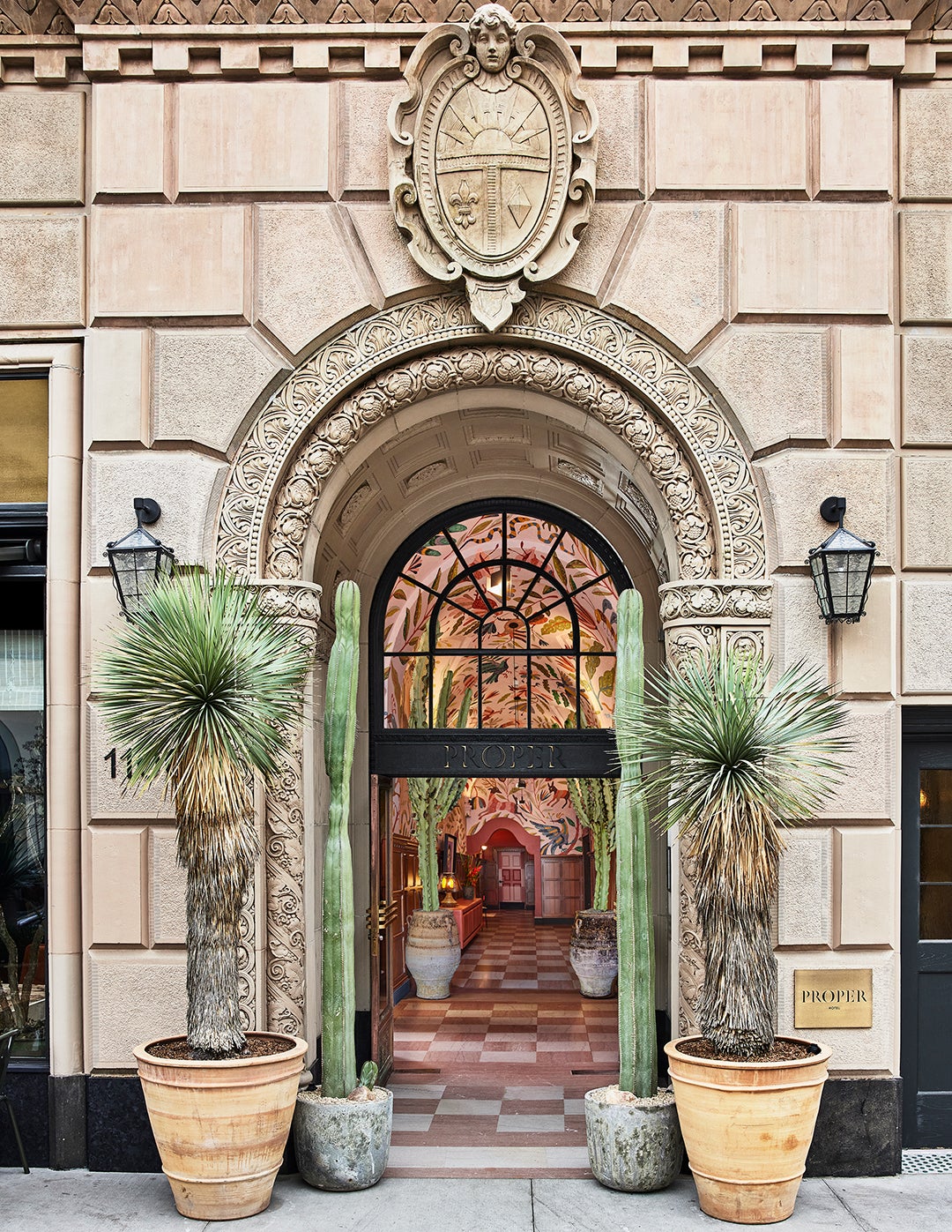 Domino cover star Kelly Wearstler is a pro at designing a warm, welcoming, and unapologetically stylish hotel space. Exhibits A, B, and C: the Proper Hotels in San Francisco, Austin, and Santa Monica. As the creative director behind all three properties, she has given them each a distinct feel that reflects their locations. “With each Proper, I try to create a design that evokes a unique sense of place,” she says. “For me, this means that each hotel should reflect the personality of the city it’s in—so naturally my approach is different every time.”

At the recently opened Downtown Los Angeles Proper, also a product of Wearstler’s devilish design mind, she paid homage to the neighborhood’s eclectic mix of cultures by adding styles that include Mexican modernism, Spanish mission, and Portuguese and Moroccan themes.

To get that feel, she didn’t work alone. She called upon a group of L.A.-based artists to transform the former ’60s-era YWCA into a 147-room design destination, starting from the moment you walk in the door and see painter Abel Macias’s vivid mural above the elevator bank and ceramist Morgan Peck’s facade at the reception desk. And in the seventh-floor pool suite, Ben Medansky’s relief tiles are practically a floor-to-ceiling sculpture.

“I tend to seek out collaborators who have a strong artistic vision,” says Wearstler. “I look for people who are not afraid to push boundaries to create something that feels new. I believe the best collaborations are the ones that push everyone, including myself, to grow and evolve as an artist.”

And each work serves a distinct purpose. In the case of Macias’s mural, Wearstler says it “brings soul and a sense of place and arrival to the hotel immediately.” As for Peck’s reception-desk piece, the designer notes that the hand-shaped graphite contributes to the “aura of intimacy and uniqueness” she wanted to achieve with the property. And Mendansky’s tile mural has patterns that evoke L.A., such as tire treads and cacti.

Together, the works pay homage to L.A.’s past, while also being part of its future. “We really took care to bring back a historic building and celebrate its original details in creative ways,” says Wearstler, also mentioning her use of vintage pieces and keeping architectural details like original window casings and brickwork. “These subtle nods to the building’s history may not be immediately obvious, but it’s a story that naturally unfolds throughout the visitor experience. It’s my favorite thing about the property.”