A Massive Pink Velvet Sofa Is the Heart of This French Creative’s 1956 L.A. Home

She wasn’t supposed to be shopping when she found it. 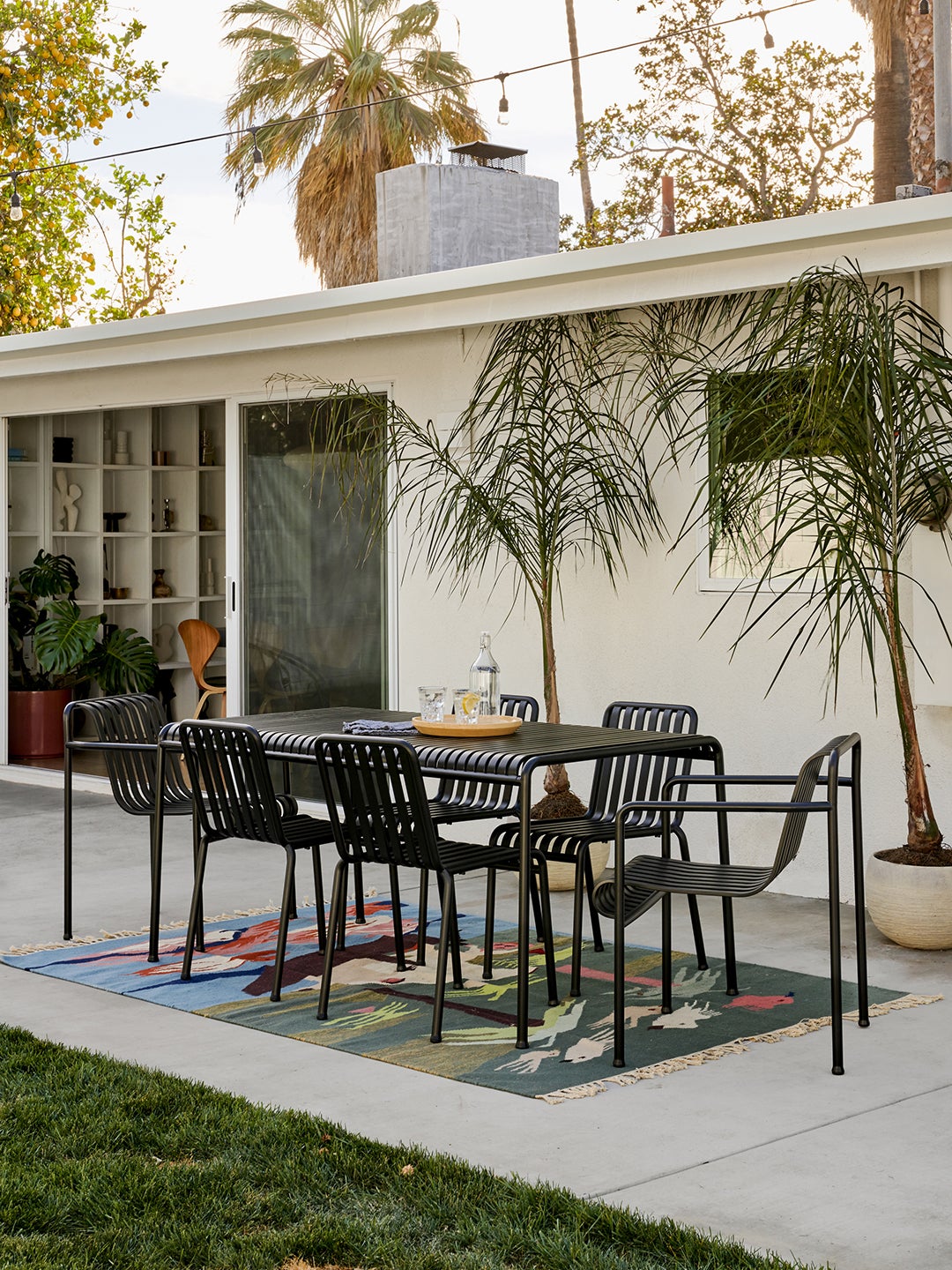 Having previously lived in a Haussmann-style apartment with elaborate molding in Paris’s 9th Arrondissement, Jen Azoulay, founder of Jen Wonders Studio, was ecstatic to tap into her true style when she and her husband, Arnaud, and their two sons (14 and 8) moved to Los Angeles in July 2021. “I have always been attracted to mid-century furniture and aesthetics, so for me it was a real criteria while looking to buy,” recalls Jen.

After months of house hunting, the couple came across an 1,800-square-foot, one-story home on a palm tree–lined street in the San Fernando Valley, and Jen immediately fell in love with the circa-1956 place’s beam ceilings, even though it was significantly smaller than their rental and in desperate need of a makeover. “The pandemic, and the challenges we crossed during that time, made it clear that buying a home for our family was a necessity,” she explains. “I wanted to invest and be smarter with my finances.”

The house took six months to renovate, and the family was living in the space for four of those. “Which was challenging, having the kids around with the dust and workers [going] back and forth,” says Jen. While they hired two different contractors (one who dealt with the inside; the other for the exterior) for the big work, Jen and Arnaud were on-site every day, paying close attention to all the tiniest details, down to the light switches. Arnaud, who is skilled in Photoshop, made mock-ups of the rooms in the very beginning to help them visualize everything, while Jen whipped together mood boards and tackled a few DIYs, like painting the living room shelves.

The biggest obstacle was designing the main bathroom from scratch. (When the pair bought the house, the space was a converted garage, so it didn’t have any windows or proper plumbing). With help from their contractor, they built fresh separating walls and ran new plumbing, which involved opening up the concrete driveway. In the guest area, however, things didn’t have to be so meticulously thought out. “I just got a green sink that I loved and went with it as the statement piece and worked around it,” shares Jen.

The oak hardwood flooring and crisp white walls and ceilings (Jen decided on Behr’s tried-and-true Ultra Pure White paint color) open the space visually, while thrifted furniture adds some character to the living area. She scooped up the rosy velvet sofa before they even moved in after seeing it on display at Pop Up Home (she wasn’t even in the market for new seating at the time).

“I started FaceTiming my husband, wondering if he was going to be mad about my buying a big pink couch,” she says. As she was waiting for him to reply, another customer came in and tried to buy it. Jen jumped on the purchase right then and there. “Now I can say it was the best decision I have made!” she adds. The vintage marble desk, with its declination of pink and terracotta hues, plays nicely with the nearby U-shaped sectional, but so does the emerald-tinged stone pedestal. “Green and pink mixed together is one of my favorite color combos,” she notes.

After spending a good chunk of their budget on streamlined windows, skim-coated walls, and the oak flooring, the couple decided to save on their kitchen cabinets and wardrobe closets in the main bedroom by going with IKEA cupboards. Jen had them painted and fitted perfectly by adding filler pieces of wood around the top, bottom, and sides to create a built-in effect, before changing out the hardware for a truly customized look. “Designing the open kitchen was not an easy task—everything was measured to the last centimeter,” she recalls. But the transformation wasn’t mistake-free. They didn’t think to map out where all the new electrical would go before making some of these major upgrades. “Switches, outlets, sconces…once you start drywalling, it’s too late to go back and change your mind,” she says regretfully.

Even though it was Jen’s lifelong dream to own a mid-century home, renovating a 60-plus-year-old house is no small feat. Along the way, she found out that the roof had never been insulated, and they spent a small fortune having various HVAC technicians try to figure out why the new air conditioner wasn’t cooling the home. “In the end, I learned the hard way that I couldn’t leave the contractor to work alone,” she says. “Every little decision was crucial.”

The object in my home that gets the most use: My Nespresso machine.

My biggest splurge: The authentic Le Corbusier chair in my bedroom.

I loved working with…my husband. I created the mood boards while he spent hours making renderings for me.

Other highly recommended craftspeople: I loved working with KNR Sliding Doors. They installed the glass divider in the kitchen and they were very professional.