A mover, a vape shop, and a vintage seller to the rescue. 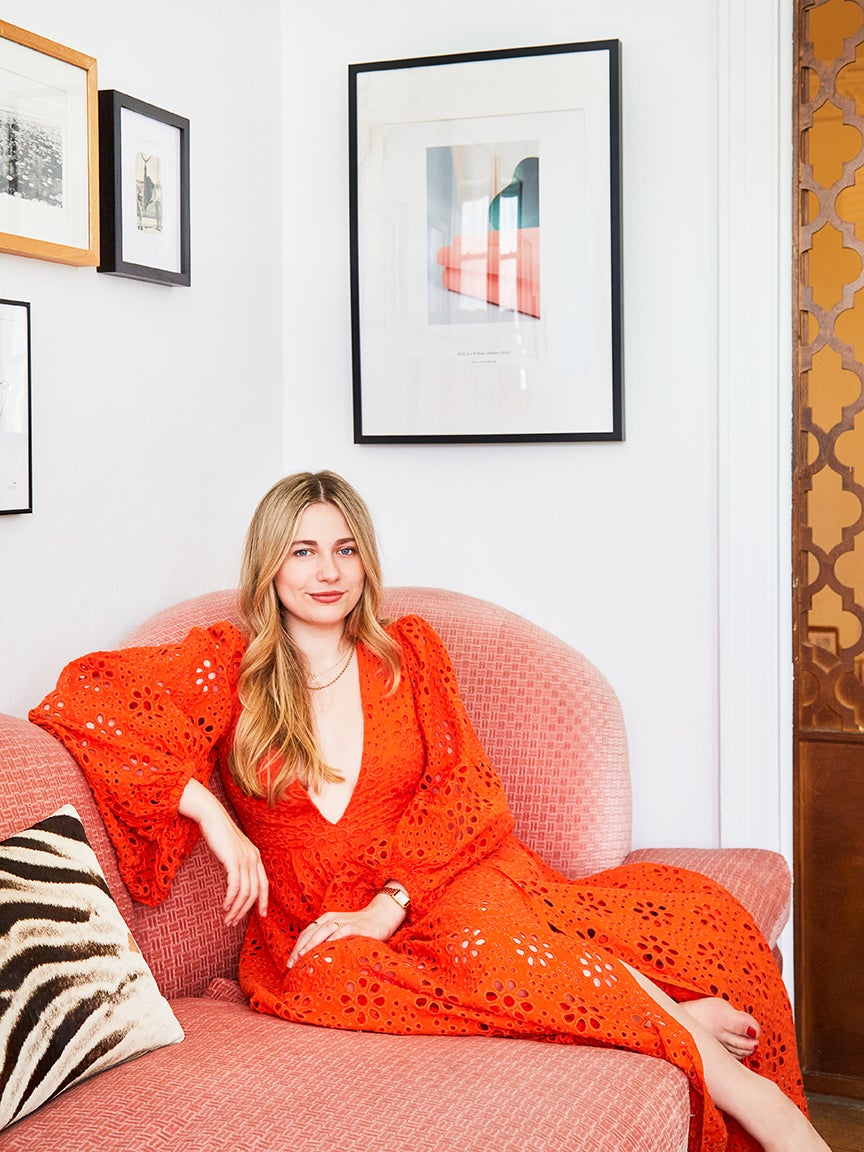 The truth is, Lily Sullivan almost wasn’t shown her now-apartment when she was searching for a new rental in 2019. Her broker was unsure about taking her to the Williamsburg, Brooklyn, two-bedroom because of its outdated features. “The walls were textured from a wallpaper that had been painted over; the bathtub was purple; the kitchen was country-western; and there was a rainbow fan in the bedroom,” recalls Sullivan, the senior manager of brand marketing and content at sexual wellness company Maude (and former Domino staffer). But what others would have seen as deal breakers, she found to be lovable quirks. Plus it was huge (for New York City standards), with a separate living room and dining room. In other words, she was sold.

Covering every wall in Backdrop’s Cool Moon was the first step. Then Sullivan started her hunt for a couch that would fit in the XL space—the only problem was, after she found her dream 10-foot pink one at the Dobbin Street Vintage Co-op, it wouldn’t fit through the front door. But with a little New York magic and a team that included a mover, a Dobbins salesperson, and an employee from the vape shop downstairs, Sullivan was able to shimmy it into the room.

By far the biggest influence in the decor, however, was Sullivan’s mom, who passed away in 2017. “This is the first apartment where I felt settled after my mother died, and I bought the things I loved. It was a place that I took ownership of,” she explains.

And so she’s filled it with items from her mom—or ones that simply remind Sullivan of her: “She had a very eclectic style. She lived in Southeast Asia for three years in her 20s, and she was a self-trained photographer and artist. So a lot of the pieces are actually hers.” The black and white gallery wall above the sofa features her mother’s photographs of the Getty Center in Los Angeles, the city where they lived for 12 years, along with a grainy self-portrait. A set of three tomato red metal Bertoia chairs (two are in the dining room, one in the living room) also belonged to her mom, who scored them for free in the ’80s when she was working in San Francisco. 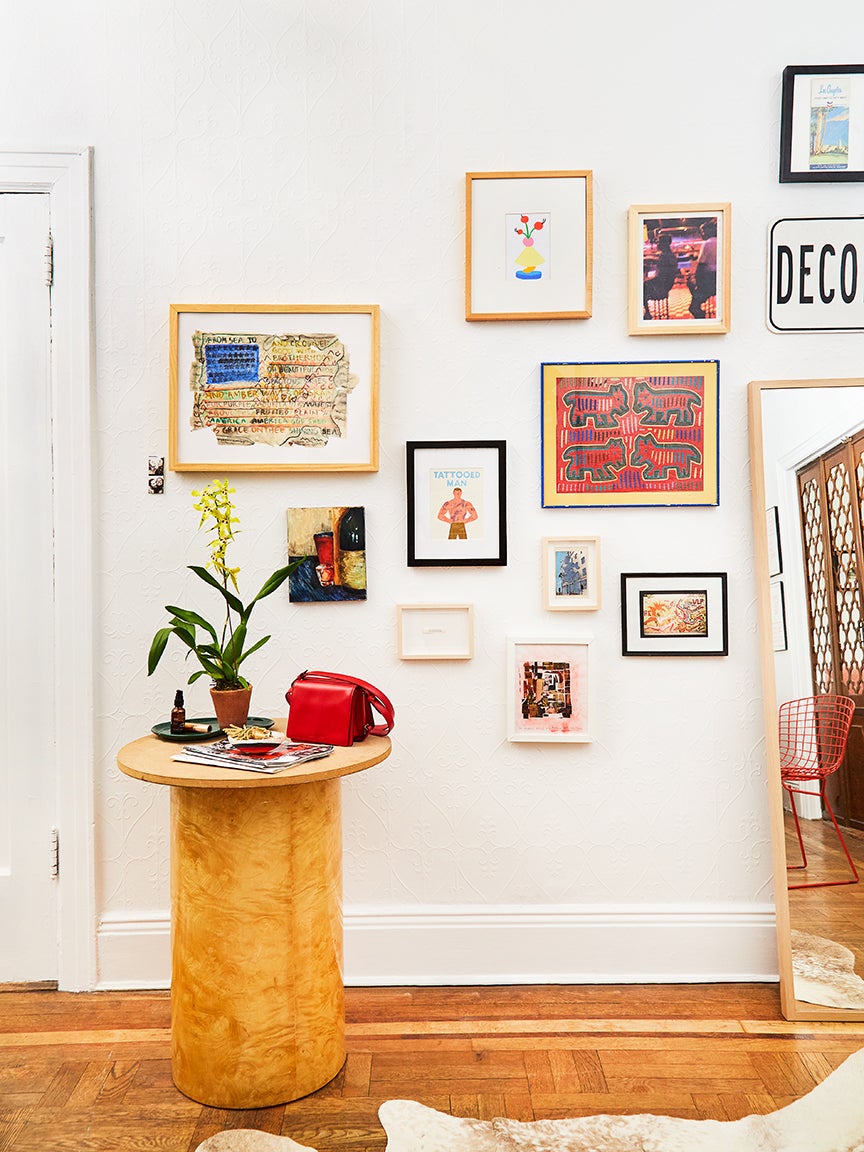 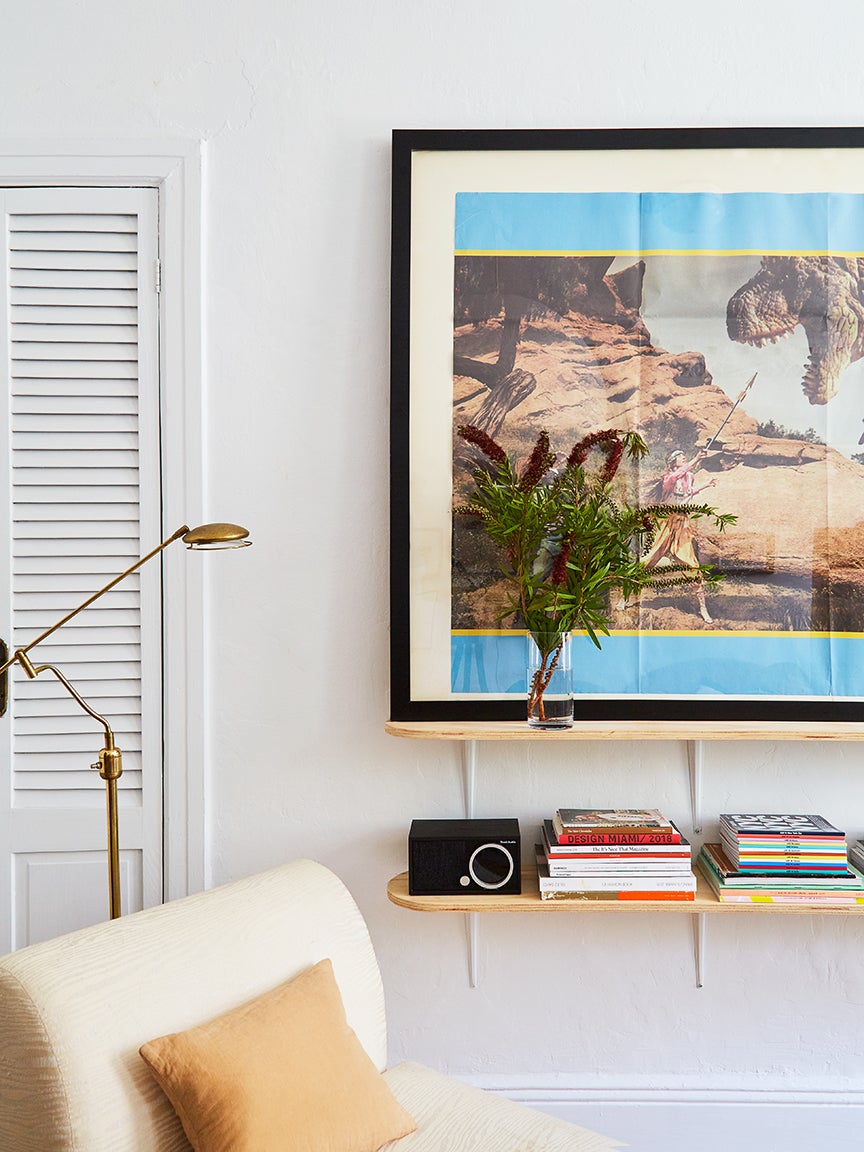 “She was always picking stuff up on the side of the road or we’d buy things for five bucks at outlets,” recalls Sullivan. “So I had decorated apartments in the past in a very relaxed, cobbled-together way, and that was very much the sentiment of this one, too. Aside from my Floyd bed, there’s no new furniture.”

Digging for vintage has become a bit of a hobby for Sullivan. “I’m pretty bullish about finding things,” she says of her twice-monthly strolls through New York’s resale shops. The bamboo divider in her living room—a visual shield for her cat’s litter box—was a $70 Craigslist score (a new one goes for $300 at Lichen, where she found her dining room table). She scooped up the round shelves in her bedroom for $50 at an estate sale. The bar cart was another Dobbins find that she topped with art her roommate found for $15, again on Craigslist.

advertisement
“This is the first apartment where I felt settled after my mother died, and I bought the things I loved.”

And if the right piece never comes along, she makes it. Sullivan’s coffee table is actually the top of a bridge table, hence the pull-out drink trays on each corner (the separate burl-wood base sits in her entryway as a place to drop her keys). In her closet, she removed the sliding doors and cut them up into shelving—“I’ve always wanted a Cher Horowitz closet,” she says—to divide the one long pole that previously lived there. Up top, IKEA baskets hide clutter and off-season clothing.

Some things, though, were just too special for Sullivan to DIY. Above her bed hangs a custom John O’Hara painting of Norman Greenbaum’s record  “Spirit in the Sky,” the song that played at her mother’s funeral, a complement to the small self-portrait (one of about 15, Sullivan guesses) of her mom that hangs above the nightstand. “She would have been 60 this year, so it was a little bit of a happy birthday to her,” says Sullivan. “It felt personal and sentimental. I’ve made this apartment a safe space by putting so much of her in here.”

Where I buy plants: Hardware stores—Crest is a favorite.

Objects in my home that get the most use: The 10-foot sofa and burl-wood coffee table—that zone is where I open a bottle of wine and hang with friends.

Biggest splurge: This year I invested in a few pieces of art that I love—I think art collecting intimidates people, but for me it’s about things that bring energy and life to the space. Both are in my bedroom—the record from John O’Hara and the bodega bouquet by Jessica Antola.

Biggest save: I definitely scored with frames—especially the two giant ones I got for $100 each (one is 6 feet tall!). I find the best ones at Mother of Junk in Williamsburg—it’s not for the faint of heart—or at art-supply stores.

Pattern in my home that is so me: The red striped pillow on my bed—red is a favorite color of mine; there’s definitely a red thread throughout the apartment.