A home and gallery space in one. 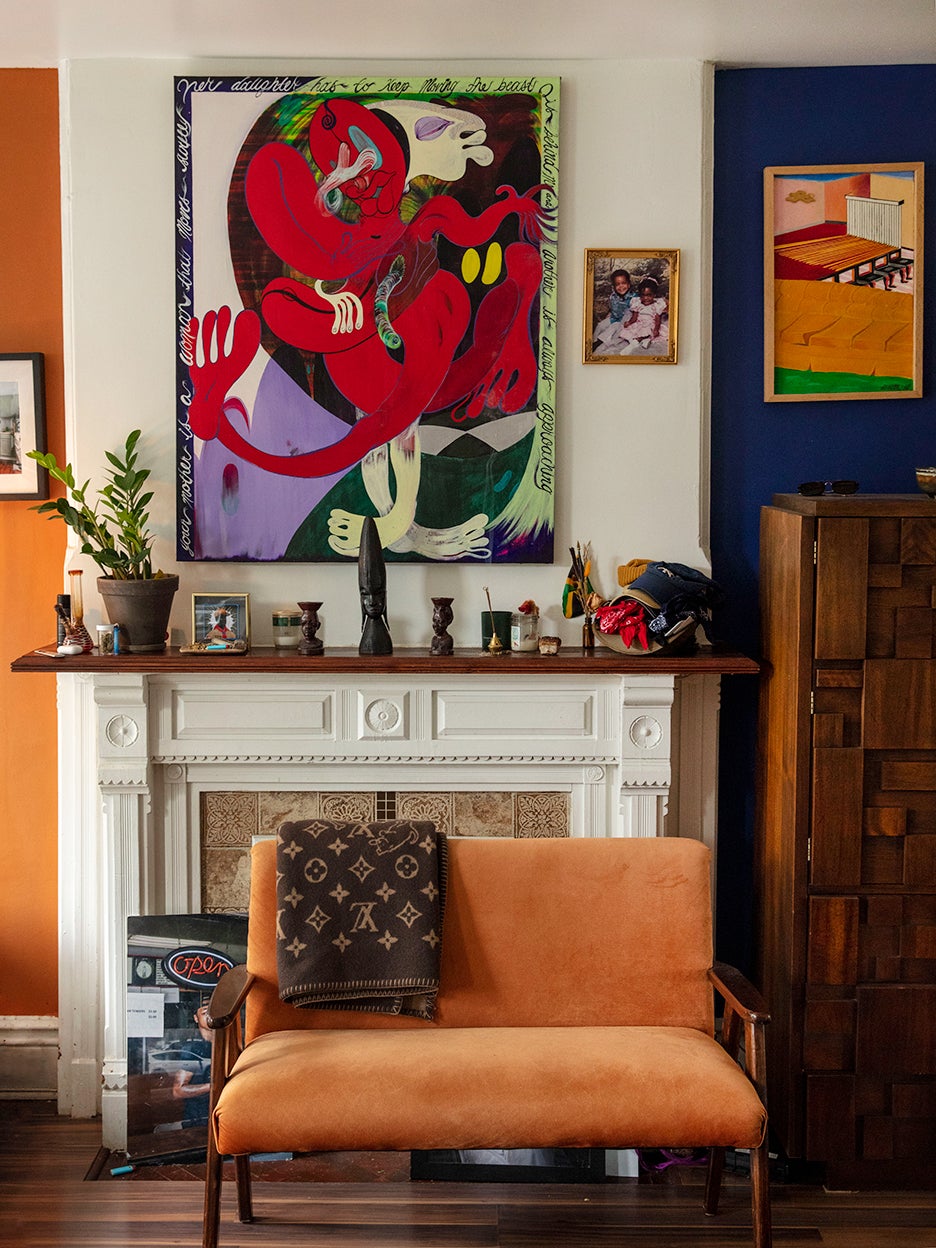 When Lorenzo Atkinson moved into his tiny Bedford-Stuyvesant, Brooklyn, studio apartment in 2018, he knew that making the space his own would be something of a challenge. Still, he couldn’t resist the building’s architectural details. The crown molding was so enchanting that he asked for an application on the spot and figured everything else out from there. With roughly 600 square feet at his disposal, Atkinson approached decorating strategically though not sparingly: He started an art collection and filled his small space with museum-quality pieces.

He rejected the minimal Danish aesthetic prevalent among his peers for one that was more playful and experimental. “Art sets the tone for everything that I have,” he says. “Prior to collecting art, I didn’t enjoy color in so many ways.” Two years after starting his collection, his home is full of vibrant hues and vintage pieces, like an orange settee on which he keeps a monogrammed Louis Vuitton blanket.

Before he moved into the apartment, the only piece of furniture he had was a vintage Brazilian armoire—which happens to complement the graphic quality of a painting by Khari Johnson-Ricks he eventually acquired. The rest of the space was shaped around his growing collection of artwork, whether it directly pulls inspiration from it or—in the case of his two accent walls (orange behind his bed and blue behind the armoire)—contrasts with it. Here, Atkinson shares the vision behind his ever-evolving home and his approach to art.

Where It All Began

Atkinson began collecting in 2018 as a New Year’s resolution—one that he found surprisingly easy, as many of his friends are artists. “Buying their work is an incredible way to support them,” he says. “It kind of became an addiction.” It was his best friend, Elliott Jerome Brown Jr., who encouraged him to buy his first piece. An artist himself, Brown’s work is displayed on almost every wall in the apartment.

The collection started with a painting by Theresa Chromati, which Atkinson currently has placed over his mantel. Chromati’s career had just started to take off when he purchased the piece—a surreal self-portrait with vibrant colors and sensuous loops—sight unseen. He was confident that the final product would inspire him. With art ranging from 5 to 50 inches in height, Atkinson often has to think creatively when finding the right home for a piece. Canvases are constantly reshuffled to make room for more. Chromati’s painting is the only one in the house whose placement is firm. “It’s challenging to find a place in my studio that does it justice,” he says.

Emotion is the main driver of Atkinson’s choices when shopping for art, but color and nostalgia also play a role. His first question when considering a piece is: How does it make me feel? One piece by Johnson-Ricks, depicting two people gazing at each other, was purchased when Atkinson was in love. “It resonated with my heart,” he says.

Collecting With a Conscience

Identity is central in Atkinson’s approach to collecting. He only collects the work of young, Black artists—many of whom are his friends and peers. Part of the beauty in collecting friends’ work is that the artists are able to maintain a relationship with the pieces after they leave their possession. “Theresa’s piece is very special to her,” he says. “She likes that I own it because she can visit it at any time.” When purchasing from a friend, Atkinson works directly with them, instead of buying through a gallery, which allows for a more intimate exchange and the potential for a more accessible payment plan.

After all, it is Atkinson’s belief that Black art should be owned by Black art lovers—instead of white institutions, which might not be properly equipped to tell Black narratives, or white private collections, where the work might be owned purely for its financial value, not enjoyed or understood for its full meaning. “Collecting for me is about making sure this part of our history isn’t forgotten,” he says. “I don’t know if I want kids, but I think it is nice to have something to pass down to the next generation, whether that be my actual children or a museum dedicated to Black artists.”

Though paintings are the main medium Atkinson has collected thus far, he also owns work by several prominent young photographers, most notably Elliott Jerome Brown Jr. and John Edmonds (who was recently included in the Whitney Biennial). “Elliott’s work evokes emotion in so many ways,” says Atkinson. “It makes people laugh or say, ‘Oh, that’s so beautiful.’” There are also many multimedia works scattered throughout the apartment: A few by Devin N. Morris act as rooms within rooms and hit a nostalgic note with Atkinson. Every piece in the apartment is transportive. Visiting friends could spend hours examining each piece and still not see everything—Atkinson believes they make the space more expansive, in spite of its square footage.

Although his collection is already very impressive for his 27 years, Atkinson is nowhere near done. He purchases about five or so artworks a year (often finding new artists through Instagram and at the recommendation of friends). He is in the process of acquiring a piece by Skye Volmar and is currently framing a pastel-colored piece by Marcus Leslie Singleton. He wants to build a sculpture collection (which will likely require a second apartment), and at the moment is stalking work by Brianna Rose Brooks (he has a small piece by them, but wants something larger), Dominic Chambers, Shikeith, and Cheyenne Julien. One wonders how long his studio apartment will sustain his appetite—a concern Atkinson shares: “My walls aren’t allowing me to purchase as much anymore,” he says. “I think it may be time for a new home.”