Before You Add Custom Doors to IKEA Cabinets, Triple-Check Your Measurements

And other takeaways from a semi-custom kitchen. 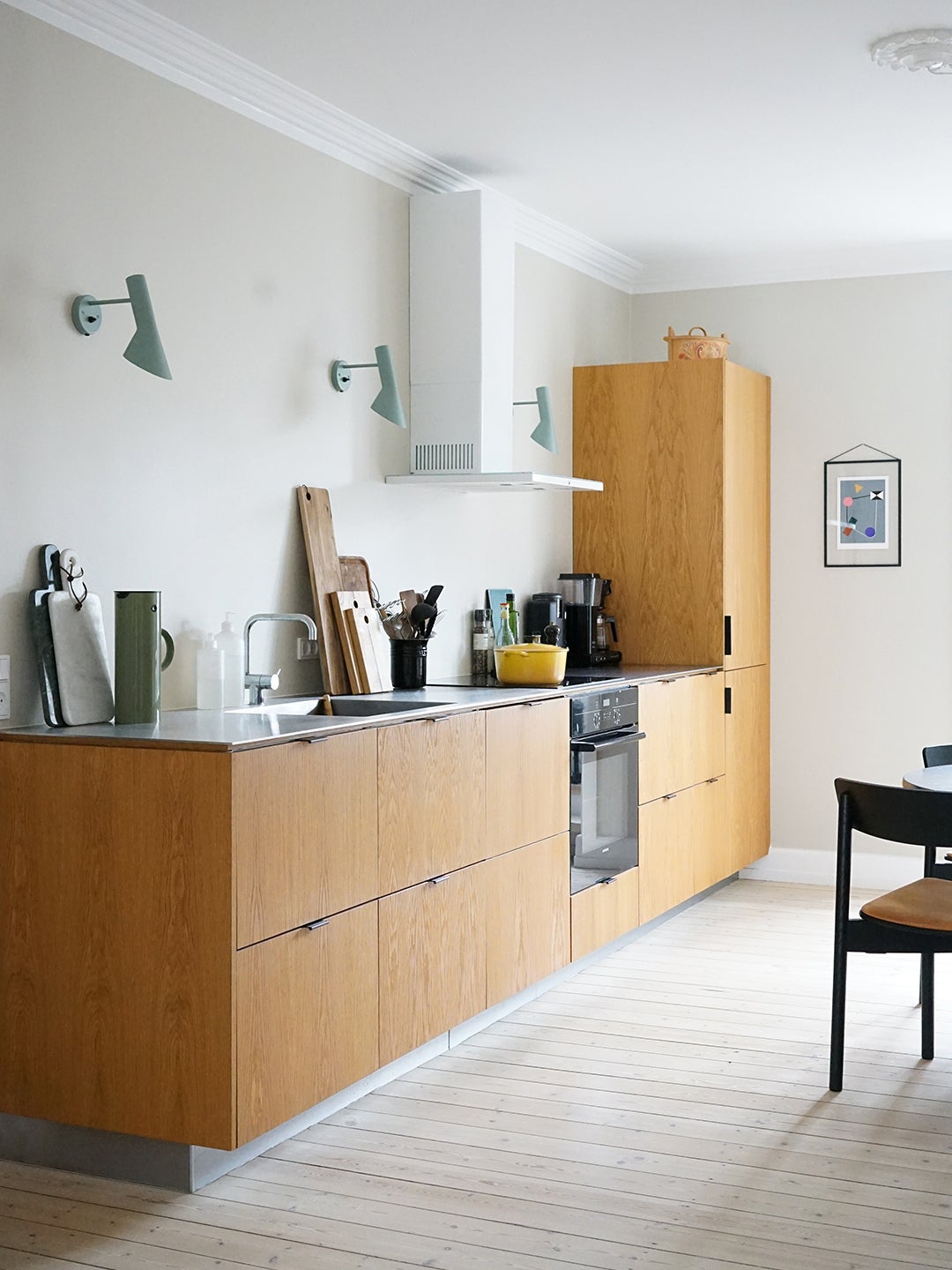 Copenhagen-based blogger Sofie Amalie Rolandsen of Thus the Fuss had always dreamed of having a beautiful solid-wood kitchen. The only problem was the bespoke cabinetry designs she liked from Danish fabricator Garde Hvalsøe didn’t align with her budget. So she came up with a compromise: She ordered cupboard frames from IKEA and added custom wood door fronts with a luxe-looking grain. The hack sounds like a breeze, but, in reality, coming up with your own configuration from scratch can be a recipe for mistakes.

Her main piece of advice? Have someone who knows how to install an IKEA kitchen install your IKEA kitchen. Rolandsen and her boyfriend passed the plans off to a local carpentry company that wasn’t particularly well versed in building with the Swedish retailer’s products (more seasoned vendors like Reform were booked up at the time). “We had to make some last-minute quick fixes because the guy took the task a little too lightly,” Rolandsen recalls. These tasks included oiling and mounting the natural oak doors themselves. And while the DIYs paid off in the end (the project cost around $8,300), getting scrappy comes with its fair share of oversights. Here, she shares her biggest regrets and what she learned from going semi-custom.

Measure to a T

Rolandsen kicked off the process on IKEA’s website, where she was able to configure the frame measurements to match her space. One thing she didn’t account for during this phase, though, was the extra-large sink that would be welded into the custom stainless steel countertop. When it came time for the carpenter to put the frames together, they realized the drawer underneath the sink was too high. They ended up having to sand the top edge with a metal file to fix the mistake.

To achieve a silky, saturated glow, the pair treated the wood boards with linseed oil. But because they didn’t do enough research in advance, they nearly ruined the wood by letting it soak for an hour. “It should have been closer to 15 minutes,” says Rolandsen. To get off some of the excess oil, they had to wash down the fronts with water.

Buy Your Appliances at IKEA, Too

One caveat to IKEA kitchens is that the measurements don’t adhere to most standards, which can make it tricky to find organizer inserts for drawers or, in Rolandsen’s case, appliances that fit inside the cabinets. While you can’t tell when the door is shut, her dishwasher actually sits too low in its box. “The perfectionist in me is not satisfied with there being a gap,” she says.

The breakfast nook is made up of two IKEA cupboards that are technically designed to go above a refrigerator, but Rolandsen used them to make a base for a cushioned bench instead. The boxes are situated on a relatively high aluminum toe kick (four inches), which makes it easy for her to prep food when she’s standing. On the other hand, it’s too tall for most chairs, so pulling up a regular stool isn’t an option.

While Rolandsen wouldn’t change a thing about keeping the space’s original 1940s floors or her new Arne Jacobsen sconces, were she ever to put an IKEA kitchen in her next home, she’d get just about everything from the retailer, with the exception of the countertops. “Instead of adding different doors, I’d spray-paint IKEA’s standard ones in a beautiful color,” she says.