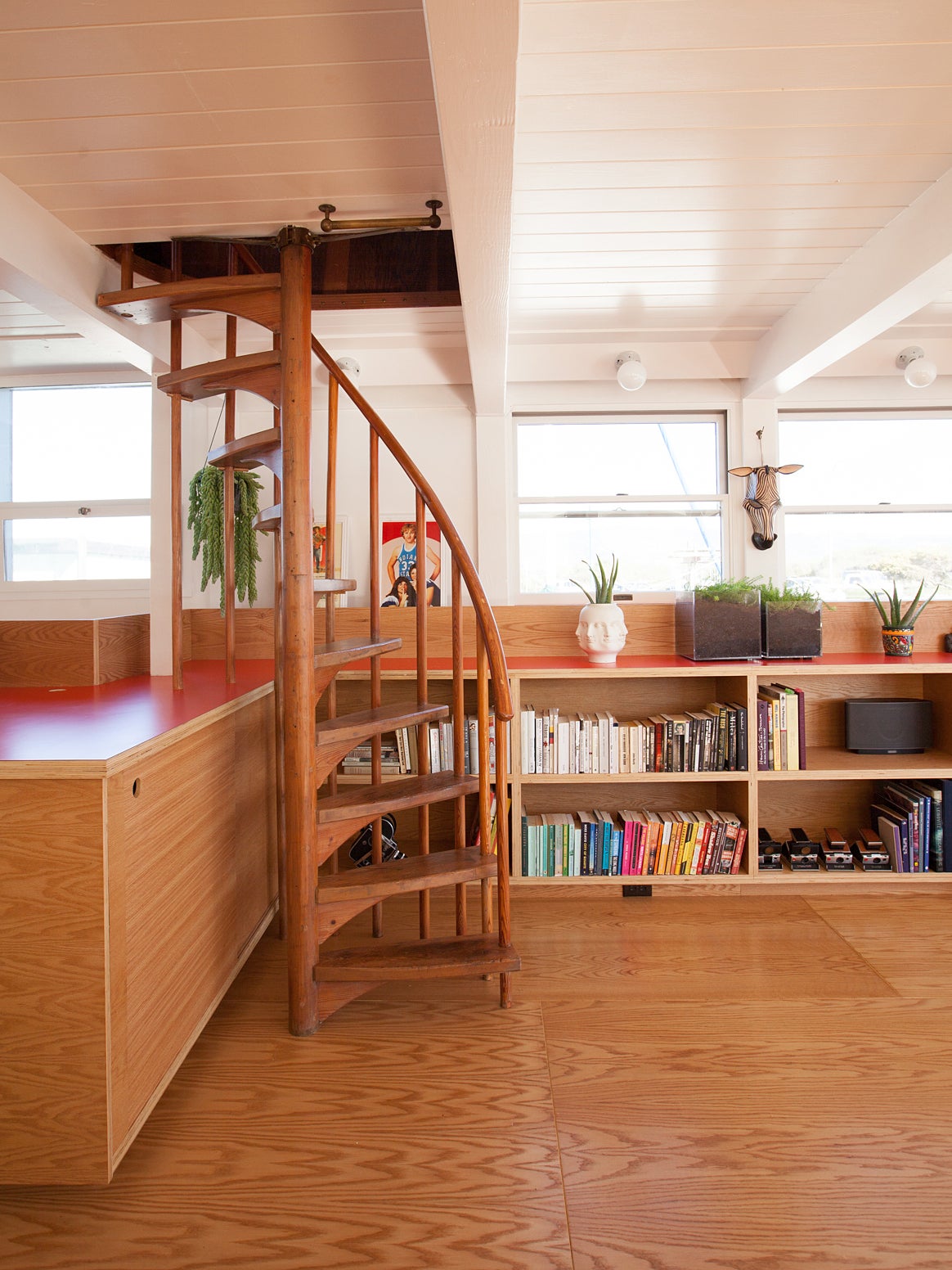 Most people rearrange their furniture for the fun of it. Zack Canepari, a photographer and filmmaker who splits his time between the East and West coasts, does it to stop his home from tilting. “That’s one of the main differences between a typical house and a houseboat,” says Ian Read, cofounder of Medium Plenty, the architecture firm that led the renovation of Canepari’s floating work studio–slash–pied-à-terre. Okay, so Canepari doesn’t have to constantly move around the armchairs in his living room, but there are lead weights on board that can be shifted when he needs to offset the heft of film equipment that may or may not be inside, depending upon his shoot schedule.

Built in the 1960s, the 1,600-square-foot houseboat is stationary (the only way it can leave its slot at the Berkeley Marina in California is by tow). And Canepari doesn’t need it to travel anywhere anyway. “A houseboat fits him perfectly,” says Read. It has great bones, a bit of quirk, and, most important, a separate lower level that he can turn into a production studio so that when he’s in the Bay Area for work, he can accommodate his team. “Our whole practice is based on doing projects that are interesting, for people who are cool,” adds Read. It doesn’t get cooler than this.

Unlike in parts of northern Europe, where living on the water isn’t all that odd, houseboat design isn’t something that people typically hire American architects for (this was certainly Medium Plenty’s first time). In the Bay Area at least, “it’s a lot of DIY stuff,” explains Read. “If you walk around the marina, you’ll see a well-done, mid-century–feeling boat next to a funky, chopped-up-looking place where you can’t even see into the windows.” One thing he is sure about: “It’s definitely a community.”

Another fun fact about redesigning a houseboat is that you can’t use a level (even the slightest tilt would throw the measurements off, plus this houseboat’s original concrete hull wasn’t perfectly flush). “That became an interesting challenge,” says Read, laughing. The architects and the contractor, Stellalux Construction, had to create a point of reference that everything, from the built-in dining room seating to the the office cabinetry, would be level to, rather than making it all off-site and hoping for the best. Their makeshift plane on the lower level? Sheets of plywood “wainscoting” that are about 4 feet high. “That was our visual line,” he adds. The top of the higher desk space happens to align perfectly with the water level, so while working, Canepari and his team can essentially look out over the bay.

Outside, Medium Plenty kept everything largely unchanged, with the exception of the bright red front door that has a blown-glass porthole window. This is really the only small nod to nautical life in the whole space, along with the old-school cabinet hardware that was sourced from a local refurbishment shop. “We’re not building a theme house here; we’re not putting in blue-and-white striped wallpaper,” notes Read. Instead they swathed the living room walls in a palm tree treatment pulled directly from Al Pacino’s character’s office in Scarface.

Because he knew that all the storage solutions were going to have to be custom to fit the odd angles and levels of the houseboat, Read opted for basically plywood everything. “Keeping the material consistent lets us make up for any weirdness,” he explains. It’s also a palette cleanser from the pops of red (the front door, the laminate kitchen counters) and the richer, orangey-toned Douglas fir floors. “It’s kind of a false narrative that plywood is super-economic,” he says of not doing it for budget reasons. “We just thought it looked cool at the end of the day, and it gave us flexibility.”

The dining table also offers increased flexibility: The bespoke surface rotates on a single fixed leg. The swivel ability allows Canepari to either dine with the water at his back or, if he’d rather soak in the view, at his side. “The one side is much deeper, much more loungy, and it goes right up to the windows,” says Read. “Part of it was just not being sure which side is going to feel better.” The L-shaped benches are topped with cushions wrapped in industrial-grade denim. The only problem was, they realized they had never put the fabric covers in the wash before Canepari stopped by—in white pants—and sat on them. “They were not all white when he got up,” says Read. A few rinse cycles later, everything was pretty much smooth sailing.