In a Notting Hill Home, Linoleum Like You’ve Never Seen Before

The wallet-friendly solution shaved months off the renovation. 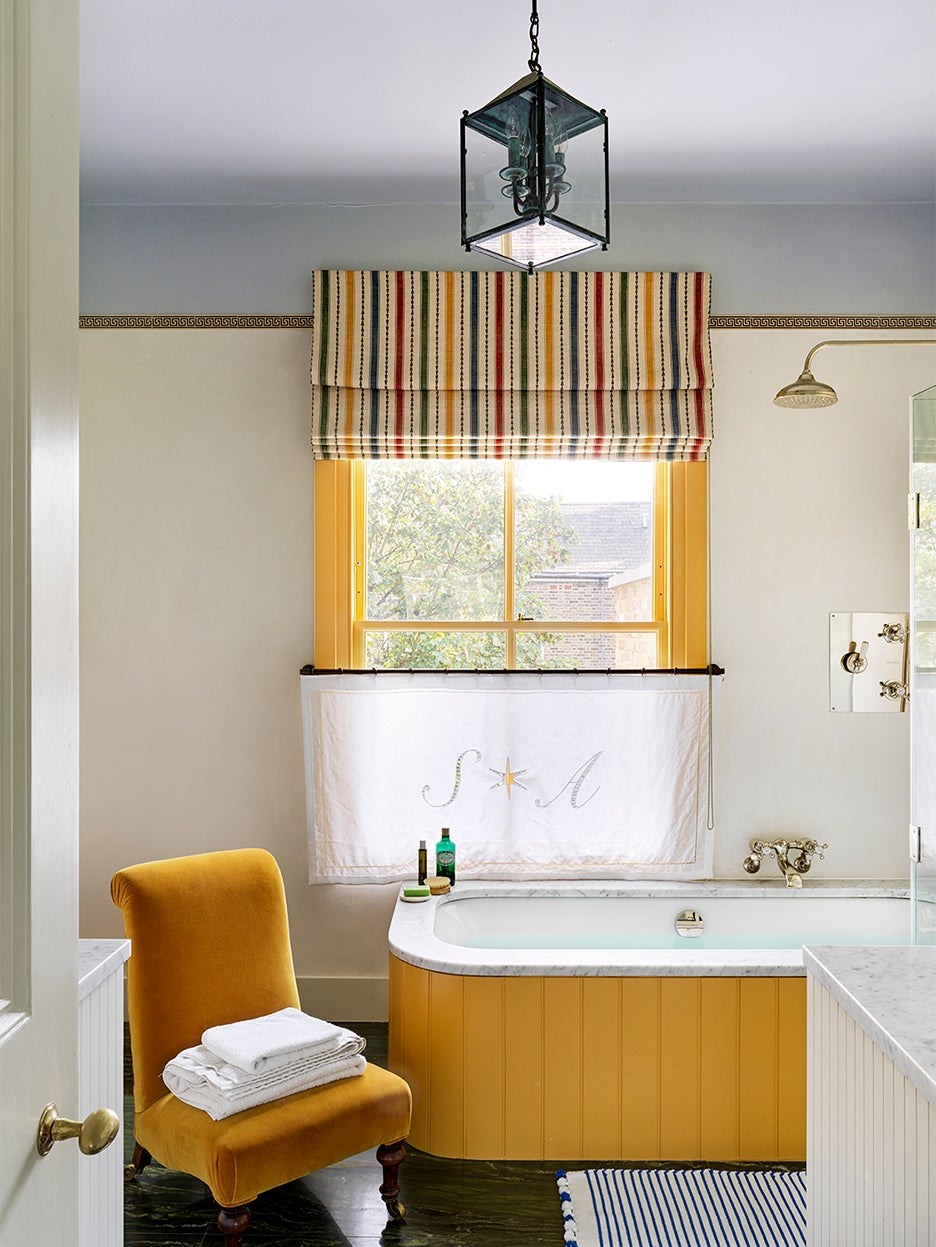 Beata Heuman doesn’t shy away from a sky blue pantry or shapely marble backsplash. So when the London-based designer signed up to renovate a Notting Hill townhouse without ripping out the black cabinets or beige ceramic tile floors that were recently installed by a property developer, she had to think of new ways to give the blank box some much-needed personality.

Time was of the essence for the owners, a young couple who found out they were expecting their first child between the first and second design meeting with Heuman. In a matter of days, a complete gut job was nixed in favor of a swift cosmetic renovation. The new timeline: six months. “The space was in good shape, but it felt quite dark and showroom-y,” says the designer.

Heuman’s first stroke of genius: blue-and-white checkered linoleum. Even though the floor finish had its heyday in the 1950s, it was a no-brainer for the designer. She could install it on top of the existing tile and save the parents-to-be a ton of time and money. “You have to sift through a lot of horrible samples,” she says. “But some of the marbleized patterns are really cool, plus it costs almost nothing and is virtually indestructible. It’s so much softer than ceramic, and I like it in that retro kind of way.”

The new timeline also didn’t allow for removing the island and replacing it with a large dining table (Heuman’s initial plan), so she focused her efforts on the countertops and backsplash instead: swapping the former surface for a green Esmeralda granite and installing light-bouncing zellige tile behind the stove.

advertisement
“We tried to make it more homey and charming without ripping the whole thing.”

In the adjacent dining area, Heuman softened the space even further with a citron yellow Chesterfield sofa that sits underneath a skylight (“It’s such a nice place to sit with all the natural light coming in,” she says), new red-and-white striped cushions on the couple’s existing chairs, and a towering rattan planter from Atelier Vime. Reupholstering and reusing a lot of the owners’ existing furniture created more room in the budget for fun finishes, like a brass kitchen faucet and patterned grasscloth wallpaper.

On the opposite end of the ground floor, a small den acts as a three-in-one space: a TV room and playroom during the day, and a grand 12-seat dining room when the couple entertains. “We made this long sofa with bolster pillows that’s tall enough and comfortable enough to sit on during a meal,” says Heuman. The table, which folds up and tucks underneath the daybed when not in use, pulls out, and the chairs in the breakfast area round out the seating arrangement.

advertisement
“It feels so cozy and quite grown-up—in the best possible way.”

The owners’ penchant for entertaining carries over to the upper floor, where a long living room is divided into multiple cozy seating arrangements. An imposing ebony macassar bookcase (another relic of the previous renovations) inspired Heuman to brighten everything else in the room. She coated the dark brown hardwood floors in light gray-green paint and applied a similarly toned seagrass paper on the walls. To give the room a warm glow, she covered the back window in an unlined marigold roman shade.

The yellow theme runs throughout the house, from top to bottom, in different forms. In the main bathroom (one of the few rooms Heuman had the opportunity to redesign from scratch), Farrow & Ball’s India Yellow brightens up the bath surround and window trim. “Where I grew up, in the south of Sweden, they use that shade on woodwork quite a lot,” says the designer. “It’s actually a bit nostalgic to me.” She paired it with green marble underfoot, waterproof polished concrete walls, a Greek key picture rail, and a gray-blue–hued ceiling. “The ceiling feels taller in that skylight shade, and a strong association to nature in the palette feels really calming,” she says.

Heuman used a similarly soothing hue on the bedroom walls and ceiling. Here, balancing the couple’s youthfulness with their preference for traditional British interiors meant doing a frilly canopy in a bold floral print. “It’s really an English dream of a bedroom,” she says. “It feels so cozy and quite grown-up—in the best possible way.”

The two narrowest rooms in the house were turned into home offices—a decision that’s become especially handy during the pandemic. The husband, a writer who primarily works from home, got the slightly wider room to make space for built-in storage. He had his heart set on vibrant red walls, so Heuman sourced the perfect slightly muted coral (which she also applied to the adjoining powder room) so it wouldn’t overwhelm the senses. “I was a little worried that it would feel a bit too intense when you sit in there, but he was adamant. He’s so happy with that color now,” she says.

Because she got carte blanche for the other workspace, Heuman opted for her preferred palette for a productive space: a soft, buttery yellow, which she paired with a matching roman shade with a peachy border and duck-egg trim. “The wife had saved an inspiration photo, and it was a completely different type of room, but the color combination was a bit similar, so I ran with it,” says the designer.

Perhaps the most muted room of all is the nursery, where a mustard theme runs from the window treatments to the arched headboard (which will one day be used by the daughter once she transitions out of her crib). “I often find rooms lack curves, probably because of the way furniture is manufactured in straight lines, so whenever we make anything bespoke, I try to add a bit more movement,” says Heuman. She also opted for a simple white IKEA bathroom vanity for the family bath, which she customized with chunky round legs and brass pulls—just another example of not needing to start from scratch to get the house of your dreams; sometimes it just takes looking at what you have with fresh eyes and getting creative.