How a couple elevated $50 boards to a statement wall. 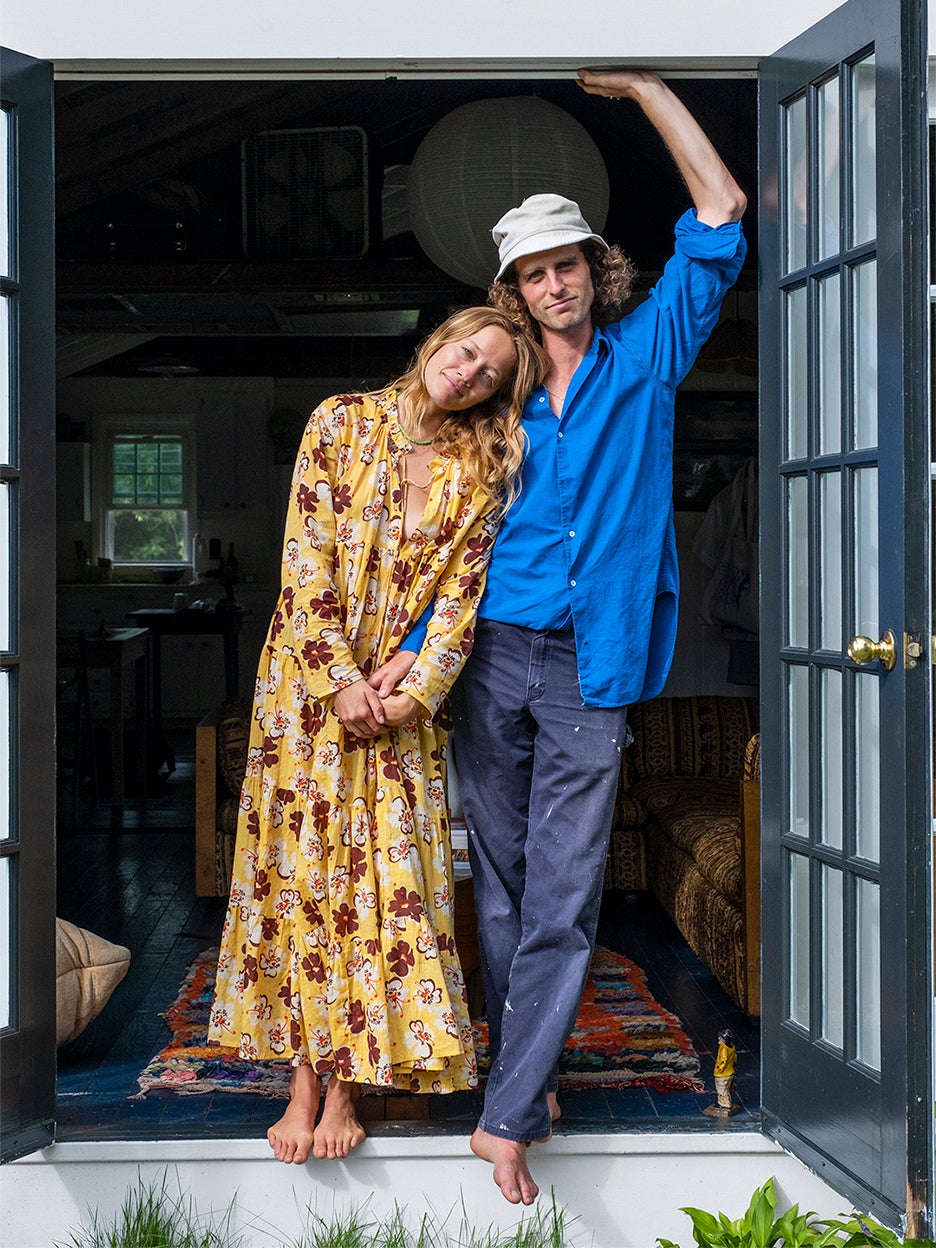 For three years, model Zippora Seven and her husband, photographer Terence Connors, lived on a sailboat docked in Montauk, New York, while saving up for their dream house, which they planned to build on a wooded plot in neighboring Amagansett. But just before starting construction on the property in 2018, Connors browsed the real-estate listings one last time. Two small cottages (built circa 1930) located nearby, set high on a hill with ocean views, popped up. “It was a lot more our speed,” recalls Connors. Craving quiet and more space, the former Manhattanites immediately put the first property up for sale.

The structures, each around 700 square feet, were in different states of disrepair. “We decided to fix up the ugliest one first,” Connors says of the cabin that would become their main living space, which had 7-foot ceilings, faux marble countertops, and (he estimates) nine types of flooring. Many contractors weren’t interested in a salvage-first, budget-conscious project, so the couple brought on a local carpenter to execute the structural work and managed the rest of the renovations themselves. As they stripped away decades of bad updates, the duo uncovered a handful of happy surprises, including a painting of a black cat on the pinewood-paneled walls. “You can see it peeking out behind my dresses in the closet,” says Seven. Here, they look back on putting down roots—this time on solid ground.

Humble plywood was the couple’s go-to material: The boards’ pinky nude undertones exude Scandi–meets–surf shack vibes in the entrance hallways, laundry room, and basement office, among other places. But more important, they only cost $50 to $80 apiece. Inspired by the grid panels outside of George Nelson’s Holiday House in Quogue, Connors devised a checkerboard scheme for the living room’s main wall (the exact width of two sheets) to give the space some symmetry, using a combination of light birch and dark mahogany.

With no original fireplace to speak of, the couple bought a simple wood-burning stove from Lowe’s for $400 to stay toasty come winter. However, the little luxury called for a compromise: giving up the guest bedroom closet in order to make room for the hearth in the neighboring living space, which they constructed on their own out of blush pink cement tiles. Unlike an open fireplace, the stove can be left to burn for hours at a time without consuming a ton of wood. Connors lights it while making his morning coffee, and even when the flames fade, the warmth remains.

Get Fancy With Faucets

In an effort to spruce up the kitchen pantry shelving (it’s actually just the framing of the bedroom wall) and hardware-less cabinets (the couple drilled the holes themselves for seamless fronts), Seven and Connors incorporated shiny brass taps from Australian brand Brodware. Their spigot-like levers “look like something you’d find on a big ship,” says Seven, who grew up in New Zealand surrounded by ocean. The fixtures were her way of sneaking in a slice of home amid all the Americana, but the nautical nod is also an enduring reminder of their days at sea.

Look to Your Neighbors

In addition to repurposing materials they found in the two buildings—the old drop-ceiling beams were used to create the new roofline—Seven and Connors scoured a local Facebook group for secondhand finds. “We don’t want to make our environmental footprint any bigger than it needs to be,” explains Seven.

Among the treasures they scooped up: four glass doors ringing in at $100, which now open up to the backyard in the cottage they’ve designated as a creative studio, and the marble that surrounds the bathtub, picked up from a nearby construction site where the owners were gutting the kitchen.

Knowing they would be tracking in sand from excursions out on the water (they still own the sailboat) and morning surf sessions, the couple adopted a nothing-is-too-precious mindset. In the primary bathroom, this meant cladding the walls in reclaimed tiles and fragrant, waterproof cedar and painting the floors hunter green (a hue that both feels like walking into nature and naturally disguises scuffs). “The scariest part is trusting your ideas,” explains Seven, who coated the secondary kitchen’s blue floor in a lemon yellow shade on a whim, then went over it in navy (an ode to its original color). “You can’t put too much stress on if it’s going to be right or wrong.”