Do You Agree With Your State’s Favorite Design Style?

Find out the one trend that's sweeping the nation. 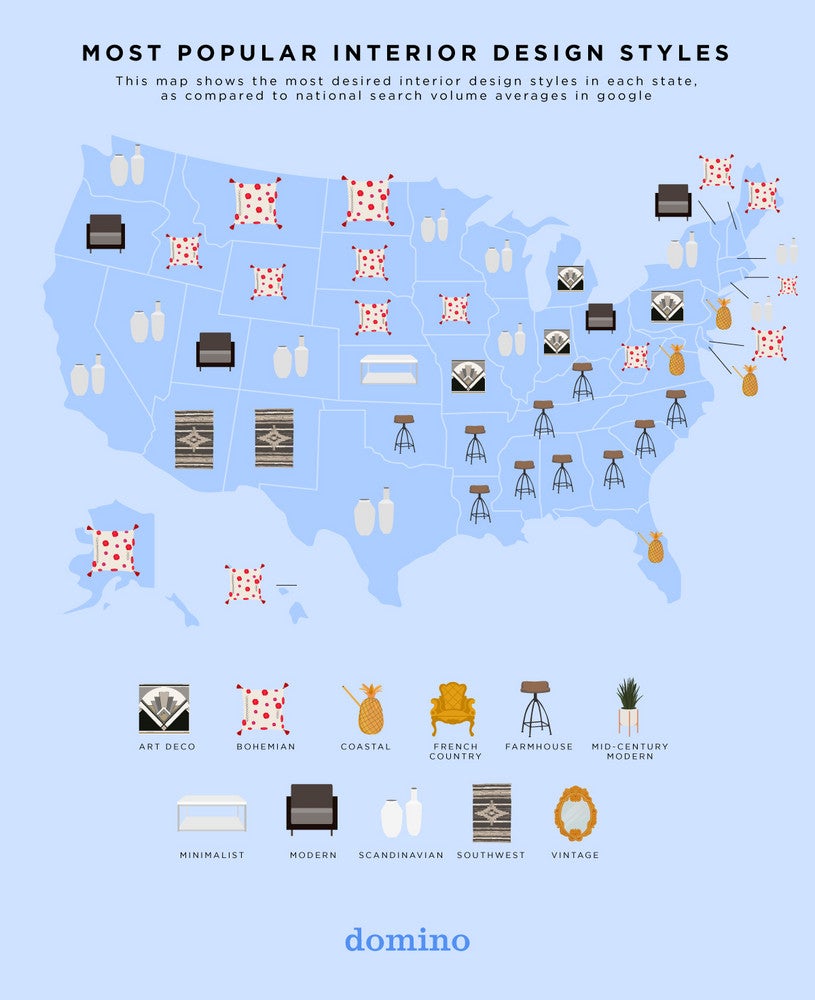 It’s official: Bohemian style is sweeping the nation. At least, according to Google. Pottery company Pots Planters & More analyzed the recent Google search trends in each state and compared them to the national search volume averages to yield this year’s results. Interestingly enough, those results show the laid back style mastered by designers like Justina Blakeney is the one most coveted by design enthusiasts across the country.

We began to see the rise in bohemian style in last year’s report, though the country’s passion for the aesthetic seems to have increased quite a bit in just one year. In 2018, 14 states favor the pattern-filled trend over the rest; last year, that number was nine. Other recent front runners include the simple Scandinavian style, and of course, the farmhouse style that’s been made more popular by our favorite HGTV stars, Chip and Joanna Gaines.

Notably absent from this year’s list was last year’s most-searched style: Victorian. It seems 2018 has people favoring a more relaxed approach to style—essentially, the complete opposite of the opulent looks that define Victorian design.

Whether it’s the plethora of new design shows or Pinterest inspo boards that have the nation shifting its design preferences, it seems these changes have geographical ties. Neighboring states appear to share similar style interests, proving that location can definitely be a factor. For example, the Southeastern part of the country shares an affinity for farmhouse; the Northwest, on the other hand, prefers bohemian.

And in a somewhat shocking turn of events, the only state still holding on to

is Kansas. Looks like it may be time to try your hand at the maximalist trend after all.

Of course, design styles come and go with time. Another recent Google search trend report suggested putting a moratorium on pieces like futons and lava lamps—once-trendy items that have since become outdated and kitschy. The report instead predicted a resurgence of ’60s decor.

Which state will be the most on-trend when it comes to adopting that prediction? We’ll have to wait and see next year. For now, grab some patterned pillows and get started on turning your home into a trendy, boho oasis.

This ’80s Design Trend Has Made a Major Comeback According to Google, This Decade’s Design Is Making a Comeback Nine Ways to Transform Your Porch Into a Bohemian Escape