Emily Weiss on the Meteoric Rise of Glossier

"I want to be the beauty version of Nike." 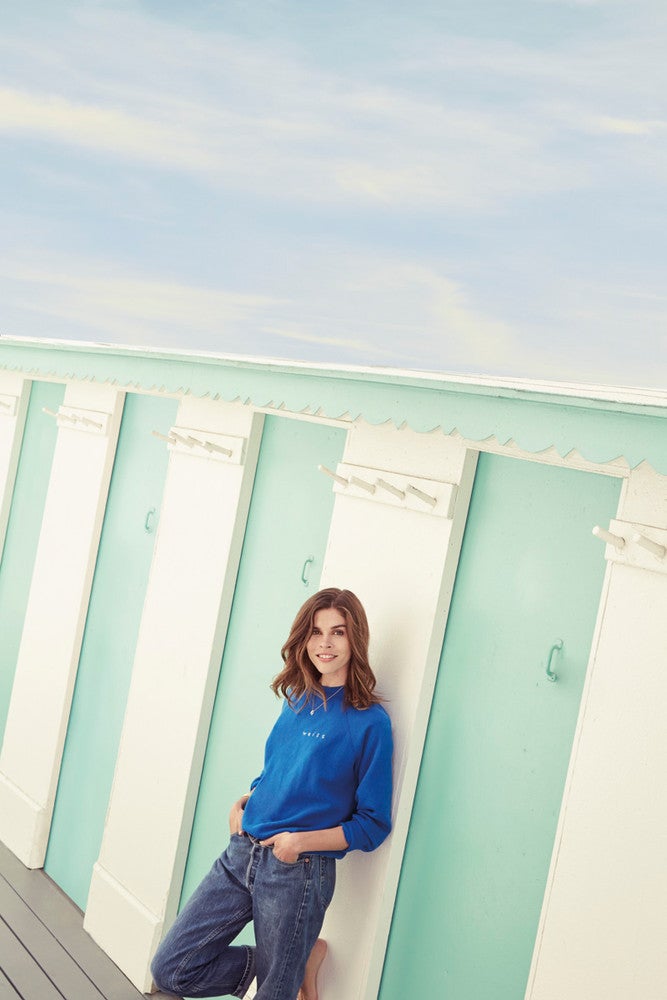 Even with a slew of buzzy beauty launches, much-hyped expansions, and a massive millennial following, Glossier still makes time for fun in the sun outside of their New York HQ.

“Fun is one of our core values,” says Glossier founder Emily Weiss as she leans up against a beach cabana and surveys the stretch of sand below, where members of her growing beauty empire are playing tetherball in bubblegum-pink swimsuits and passing around pastel cones of cotton candy.

Clad in gray company sweatshirts or Wet Hot American Summer–inspired Camp Glossier tees and slathering on Invisible Shield (this season’s new serum-like sunscreen), Team Glossier exudes an infectious sense of cool-girl (but not too cool to talk to you) camaraderie.

“We work really hard, and a lot of us spend more time together than we do with our spouses,” Weiss adds, as staffers reminisce about one recent “Gloffice” happy hour that evolved into a karaoke-style lip-syncing battle. “It’s really important for us not to take ourselves too seriously.”

Such was the reasoning behind Camp Glossier, an annual all-staff summer off-site gathering, which sent shock waves across social media last August with its epic games of human bubble soccer and personalized Bruna Malucelli maillots. But this July, Glossier will take its third out-of-office outing up a notch with a three-day trip to Cedar Lakes Estate in upstate New York—a lot less rustic than last year’s sleepaway camp with no-frills bunk quarters and freezing showers.

Associate manager of team and culture Cherie Camacho and “head of people” Lynley Flanagan (Weiss dislikes the outdated concept of human resources) channel the witty, conversational tone of Glossier’s newsletters when they emphatically declare there will be no more brutal bubble soccer this summer, alas. But count on more carefully curated, aesthetically driven Color Wars, s’mores by the campfire, and a few go-rounds of Secret Past, which is Weiss’s favorite icebreaker to play with new hires. (Her own secret past? She once babysat JonBenét Ramsey. Just try and top that.)

Not to mention, the team will be customizing 2017’s summer merch by designing everything from retro bucket hats and sew-on patches to Camp Glossier lettered tees in-house. “Everyone kills it when it comes to our swag,” says Weiss.

Indeed, the company’s collateral—be it the gothic ‘G’ logo or the sheet of emoji-like stickers tucked inside every pink bubble-wrapped pouch bearing Boy Brows and Balm Dotcom—is arguably as vital (and, no doubt, as brilliantly branded) as the actual beauty products.

Take Glossier’s SoHo showroom, a minimalist wonderland with sleek stations of wait-listed creams and cleansers (“We wanted to create the polar opposite of Sephora”), oversize mood boards collaged in cutouts of super-shiny cherries and glistening glazed doughnuts, and a coterie of down-to-earth editors in those Glossier-pink (which happens to be Pantone 705-C) jumpsuits. They scouted the showroom staff on Instagram and, like many members of a full-time team, offer gigs to those die-hard fans preaching the “Glosspel.”

“We’re the first digital beauty brand out there,” Weiss explains. “And we’re also the first beauty products that girls are ‘passing up’—meaning that we’re seeing daughters recommend Glossier to their moms, rather than vice versa.”

The three-year-old company’s disruption of the beauty industry is already undeniable, and though Glossier’s following may be cult, it’s certainly not niche: It grew by 600 percent in 2016. “I want to be the beauty version of Nike,” explains Weiss, remarking how the barrier to entry for beauty is much more attainable, and mass-marketable, than higher-end luxuries like fashion. “I plan to, you know, like—just ‘dew’ it.”

And with their long-awaited launch in the U.K. this fall (50 percent of the brand’s followers are international), a signature fragrance on tap, more than 282 new job openings, along with a move into new West Village headquarters, the Glossier girl army is, well, just getting started.

Executive Assistant to the CEO and COO, @mvonsteen

Senior Editor at Into the Gloss, @emily_ferber

In this image, from left:

Senior Editor at Into the Gloss, @emily_ferber

Every week, the Glossier team gets a fun questionnaire in their inbox from the hip happiness-in-the-workplace startup, Know Your Company. A few sample questions: What’s the best costume you’ve ever worn? Are you an introvert or an extrovert? What was your favorite band 10 years ago? If you could teach a class, what would it be?

A Brief History of  Camp Glossier

Tiny Bubbles: The story of the Pink Pouch

A hit among the street-style set and an ideal plane-packing companion, Glossier’s pink pouch was inspired by anti-static bubble bags—then re-created in a very particular shade of pink (designer Adriana Deleo went through many rounds to nail the exact hue). Finished with a cherry red zipper, this pouch has pop.

Read more from the summer issue: