Sarah Sherman Samuel knows how to have fun, even with neutrals. 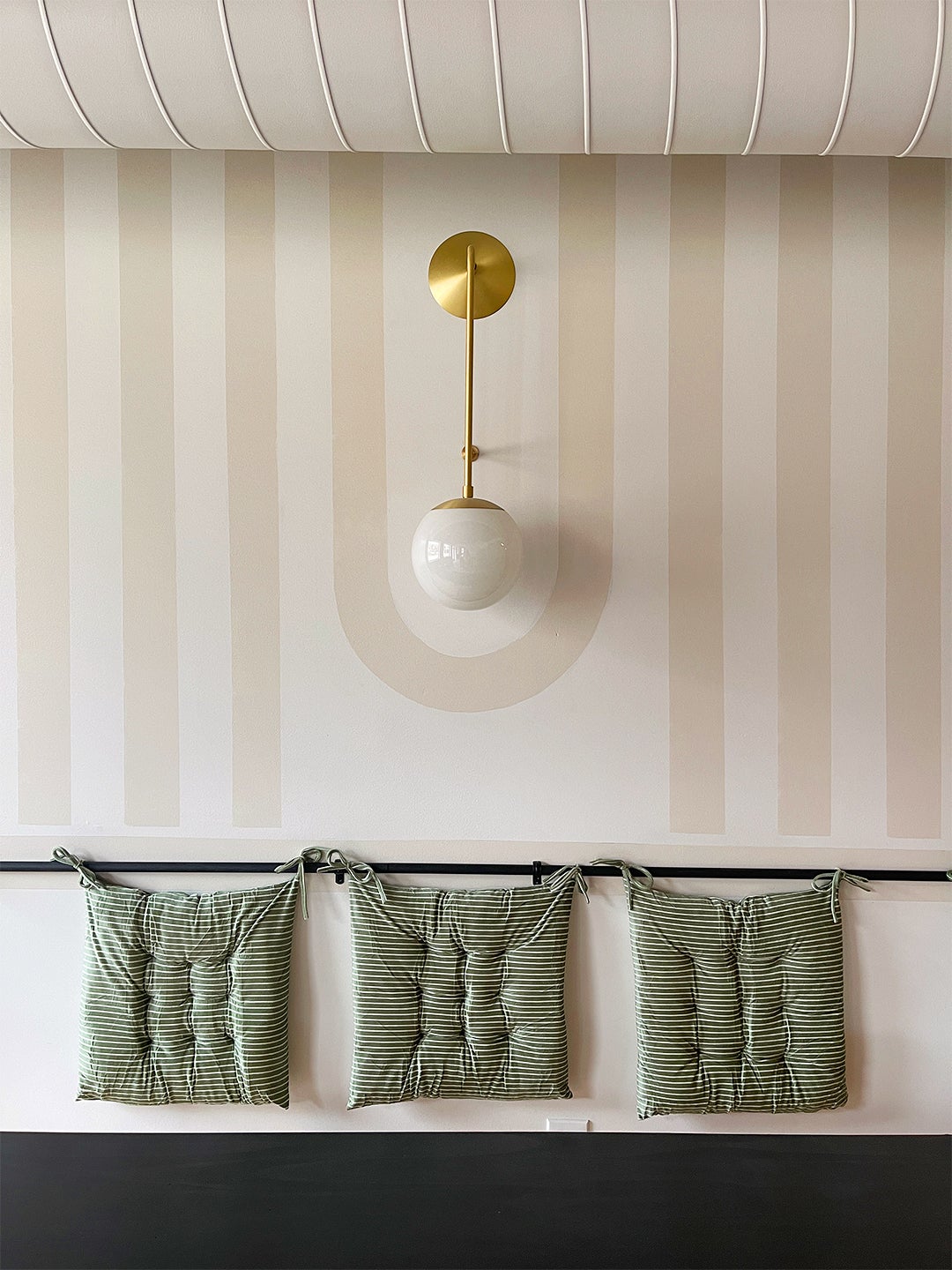 Designer and Domino columnist Sarah Sherman Samuel takes us behind the scenes of her latest project in a monthly series that tackles the nitty-gritty of remodeling—from sourcing materials and fixtures to DIYing a kitchen island.

You can’t always measure everything to a T; you have to roll with the punches when constraints pop up. That’s never been more true than when it came to painting the dining room of Gaia Cafe, my local-favorite restaurant in Grand Rapids, Michigan. The other half of the eatery is a juice bar, where people are more in and out and the decor is loungy. For the neighboring space, where people would be sitting and spending more time, I wanted to keep it bright but not boring, with big vertical stripes. They’d run down the narrow room and would make it feel airy without leaving those bland white walls.

Looking at the room now, everything appears perfectly coordinated. Upon closer inspection, though, it’s a case study in “eyeballing it.” When we found out that the sconces couldn’t be evenly spaced (thanks, old cinder-block building), we knew it would throw off all our measurements for the paint treatment. From light fixtures that couldn’t be equally spaced apart to stripes that had to feel balanced rather than precisely distanced, creative adjusting was my most important consideration. Stripes are a classic, and the pattern isn’t too overwhelming, which lent itself to the breezy vibe. I went with some classic neutrals, and we added fun touches to mix it up, like rounding the lines off underneath each sconce, which gives some deserved extra attention to the simple fixtures. Figuring out how to get everything to look right took only a few steps.

The room is really narrow, so I had to create something that pulls attention across the walls and through the right side of the restaurant. I picked two types of sconces by Cedar & Moss, which provide some visual weight. But because the building is very old, we weren’t able to have them spaced out perfectly even. Sometimes it’s 95 inches; sometimes it’s 92 inches; sometimes it’s 98 inches. To keep it from feeling weird, we decided to use more stripes in between so the distance between each sconce would be less noticeable.

To block the stripes out evenly, I started with the ones going around the lights and worked outward from there. I made a poor man’s compass for the half-circles—a piece of string attached to a pencil—and drew lines going to the ceiling on either side. (Painter’s tape doesn’t work for rounded edges.) The straight lines I measured out by using a ruler, and I put a little dash at every spot where there would be another stripe, all the way across the wall. I placed standard blue painter’s tape along those markings to keep the stripes perfect. Because the spacing in between the sconces isn’t exactly even, I had to eyeball it a little bit—some lines are 3.5 inches apart; some are 4 inches. I put one big horizontal piece of tape to mark where the row of seating was set to go in the finished space. (The stripes didn’t need to go farther than that.)

Step 3: Break Out the Rollers

I chose two Sherwin-Williams tones: Pure White and Shoji White. Because the pattern is more relaxed, it made sense to use subtler colors that could blend into the room. I mainly used a roller so the brushstrokes wouldn’t show, and a foam paintbrush for trickier spots like the loops around the fixtures. (I had to trace the pencil marks with the brush by hand very delicately.) Once everything had dried the next day and I pulled up the tape, I replaced the strip on the bottom for a running bar that will hold up the cushions for the seat backs. The next phase of the project was under way.