Sarah Sherman Samuel upcycled it all for Gaia Cafe’s revival. 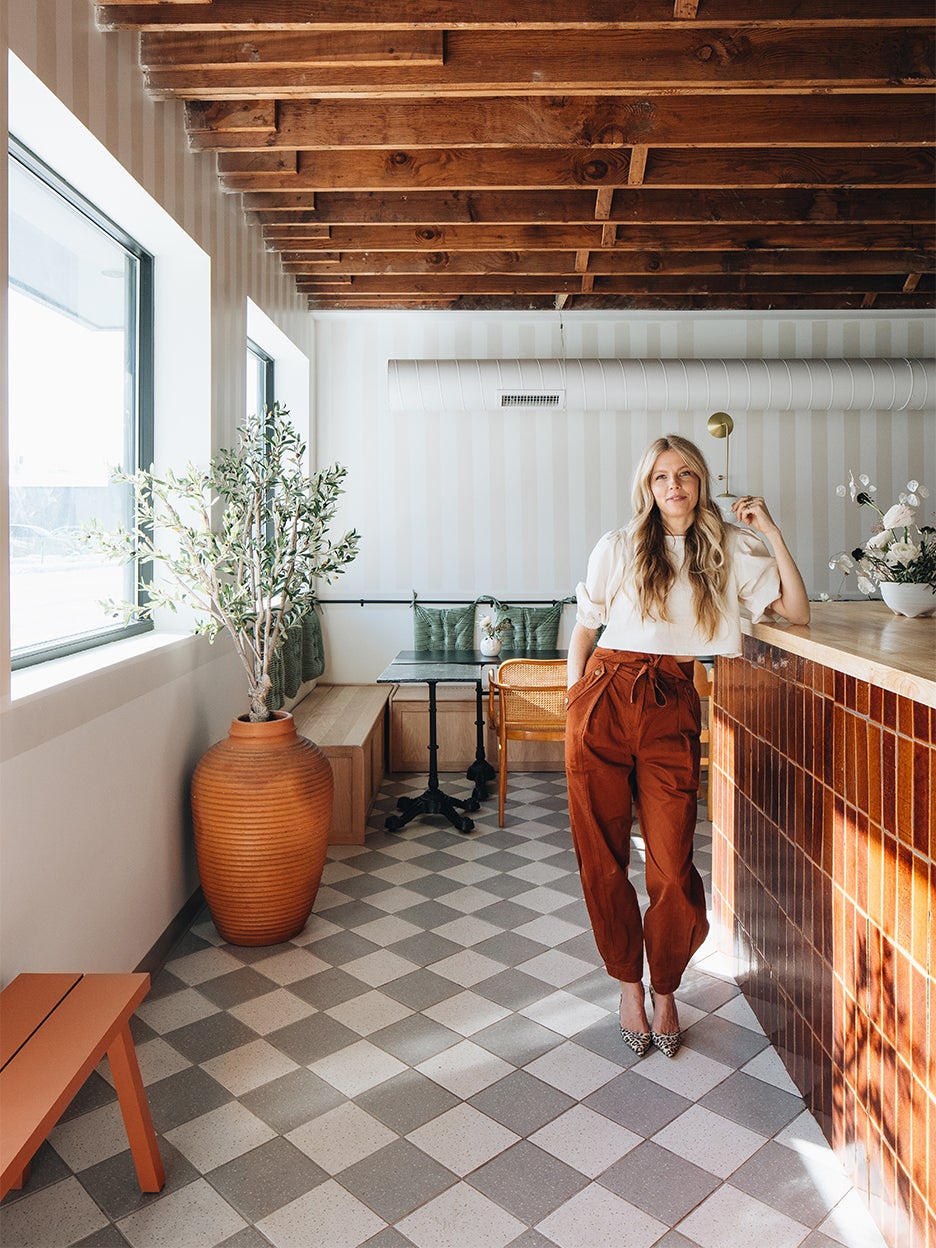 There was more to the ’80s in Grand Rapids, Michigan, than leg warmers and Memphis-style interiors—Gaia Cafe was also gaining momentum as the first vegetarian restaurant in the city. The bohemian eatery was regularly filled with artists, writers, and musicians munching on homemade tempeh or lemon brussels sprouts, even though the interior always looked a bit rough around the edges. Now, years after the original location closed, former manager Andrea Bumstead is reviving the neighborhood icon. When a childhood friend found herself back in Grand Rapids—designer Sarah Sherman Samuel—the owner brought her on as a partner to craft the interiors.

“We met in elementary school and were fast friends for years, before we each drifted to our own thing,” says Bumstead. A decade later, the two picked up right where they left off. “I told her how I wanted the space to be like walking into a cool grandma’s house. Sarah really nailed it and brought a lot of different, new ideas. In the end, her personal spin fit perfectly,” she notes.

When it came time to find a new location for the second coming of Gaia Cafe, a U-shaped building in town made for a perfect spot to have both a juicery and traditional dining room. Guests are greeted by a massive 50-foot glazed-brick bar that functions as a takeaway counter and spot to pick up fresh-squeezed OJ or a smoothie. “The original Gaia was on an old brick road,” says Samuel. “It ties back to the roots.”

Just because there’s a shiny new restaurant doesn’t mean it’s skipping the character of the original. Rather than outfit the eat-in section with all new chairs, Bumstead put out a call to any neighbors who wanted to donate their personal seats to be repurposed. (Samuel’s, covered in painted florals, is stationed at the front-right of the room, a prime location from which to see who might be drifting in and out across the foyer.) Because of the tight quarters, Samuel had a custom-built bench installed to let servers pass through the middle with ease. A rod runs above, hung with chair cushions that were only $30 for a four-pack and repurposed as a makeshift banquette back.

To balance the lack of natural light in the long corridor, Samuel elongated the space with a vertical stripe treatment in varying shades of Pure White and Shoji White paint by Sherwin-Williams. Your eye is naturally drawn to the end of the room, where a scalloped doorframe leads to the restroom. “There’s a performance space in another part of the building,” says Samuel. “They were throwing away these wood circles from sets, and I scooped them right up, knowing we could build something with them.” After a quick paint job, she trimmed the doorway with the circles (cut into halves) by hand using Liquid Nails.

The partners went for something funkier in the juice bar, with the hope that it would draw people into the space instead of just taking their orders to go. Soaking up every bit of sun coming through the row of windows is Samuel’s rich wall-color pick: Hunt Club, a deep green by Sherwin-Williams. Behind the three custom-built archways at the back of the room, citrus-themed wallpaper by Lulu and Georgia makes the perfect backdrop for a blender full of fresh fruit.

What truly makes the project complete, though, are the many ties back to the community. Local artists have their work on display on the lounge’s gallery wall, all available for purchase. The club chairs and yellow gingham sofa were sourced through nearby vintage dealers and designer colleagues. And when it came time to construct the millwork (among other things), Samuel’s dad—a self-taught pro—came in to get the job done. Now they’re all ready to enjoy the fruits of their labor.