Sarah Sherman Samuel’s latest project, Gaia Cafe, is off to a colorful start. 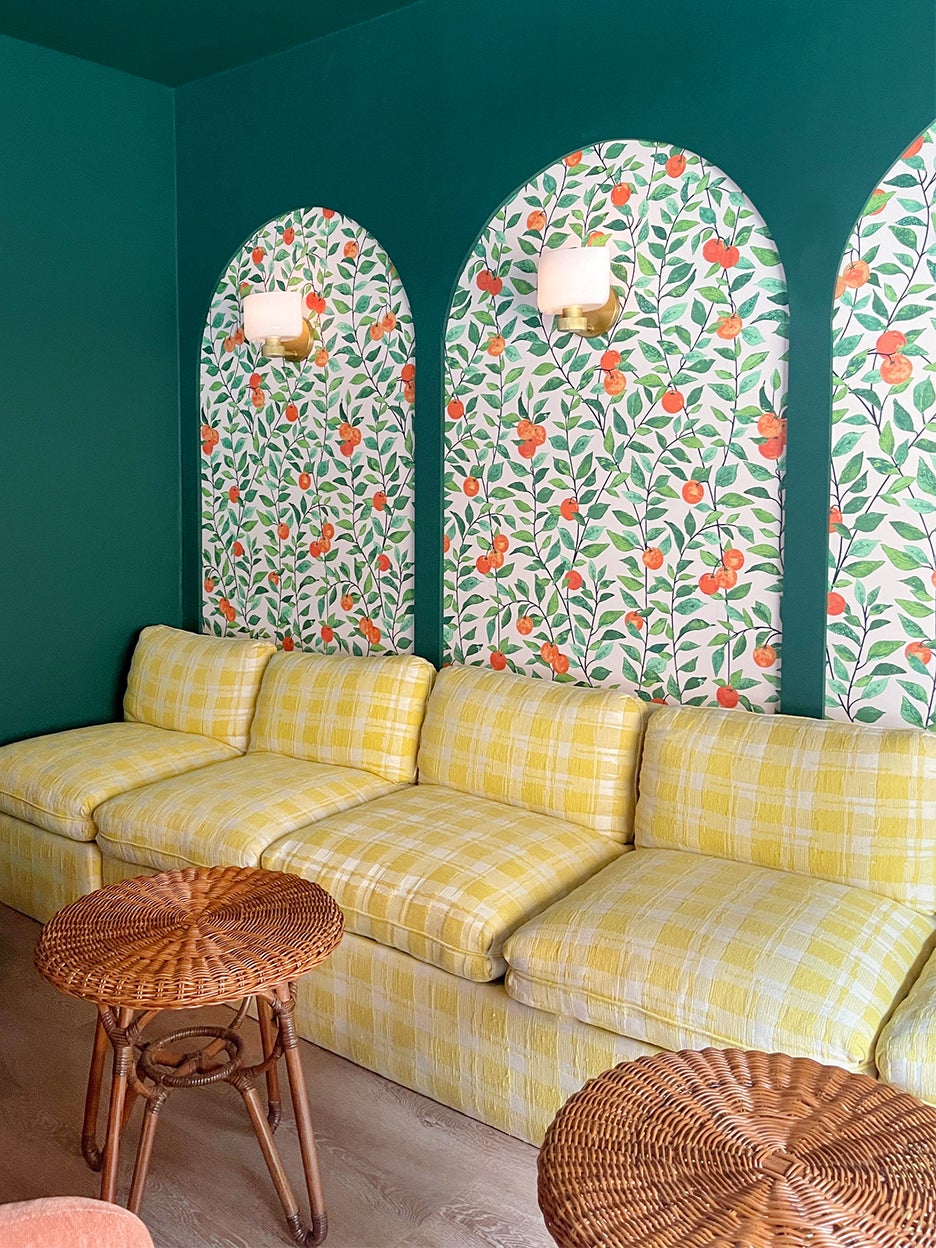 Designer and Domino columnist Sarah Sherman Samuel takes us behind the scenes of her latest project in a monthly series that tackles the nitty-gritty of remodeling—from sourcing materials and fixtures to DIYing a kitchen island.

Back in the ’80s, Gaia Cafe was the first vegetarian place in Grand Rapids, Michigan, and it had a cult following. Thirty years later, I reconnected with a childhood best friend from Michigan, Andrea Bumstead, who was reopening the restaurant and wanted me to design it. I also ended up investing in it, since the entire community is rooting for the reopening. We’ve been at it for months, and carryout orders are set to start in February. For the café’s next incarnation—half dine-in, half juice bar—we got creative with DIY projects, because most of the budget went to renovating the old structure down to the studs. To get started, I took on creating custom archways in the bar area. The nook needed an architectural detail to separate it visually from the seated dining room on the other side of the space. Here’s how I did it.

Step 1: Start With the Lighting

Before we even knew we were doing this wall treatment, the electrician had to come months in advance. The sconces we ended up getting are from Lulu & Georgia. It definitely took some foresight, because I had decided on doing wallpaper but didn’t know which yet, so I needed sconces that wouldn’t get lost in the pattern. These did the trick. The main ceiling light, a pendant from Hudson Valley Lighting, was also rewired then. It was left over after a previous project of mine, so I let Andrea keep it.

The original restaurant had a hodgepodge appeal, like visiting a cool grandma’s home. We wanted the remodel to feel really comfortable too. Gaia is the goddess of earth, and being a vegetarian place, we felt green was a natural choice. The deeper shade we chose for the walls and ceiling was Hunt Club by Sherwin-Williams. As an accent we bought two rolls of a fruit-pattern wallpaper from Lulu & Georgia, totally fitting in a juice bar.

I knew from the beginning that I wanted the arches to go over the wallpaper, which covers most of the wall (except for some areas at the top that the Sheetrock covers anyway). To create the arch feature, I went to Lowe’s and found three 4-by-8-feet, ¾-inch-thick MDF panels. They only cost $35 per board. Holding a string in one hand at the center of the arch, I traced a circle in each piece for the dome, and then used a jigsaw to get the cuts even. Once the cutting was finished, I smoothed the edges with sandpaper and an orbital sander. (It’s the same process I used to assemble my son’s bunk bed.) All in all, we finished it in a day.

The cutouts are secured mostly using Liquid Nails. I did add a few screws to the corners of the boards, but held back so I wouldn’t have to do a lot of patching. We handled the installation in an afternoon, then painted them to match with two coats of Hunt Club.

Step 5: The Rest of the Room

People will be flowing in and out of here, so there’s less seating to manage. One thing I did bring in was a vintage sofa I picked up at a local store in Grand Rapids. It’s a fun yellow checkered pattern that, next to the wallpaper, follows the same trend of colors found in nature. Now that this wall is done, I’m moving on to the next project: a paint treatment in the main dining area. Check in with me in February to find out how painter’s tape tricks can get you everywhere.