Inside the Unexpected, Expertly Crafted World of Designer Faye Toogood

A true polymath, British designer Faye Toogood seamlessly shifts between diverse creative roles and approaching a project from every angle. 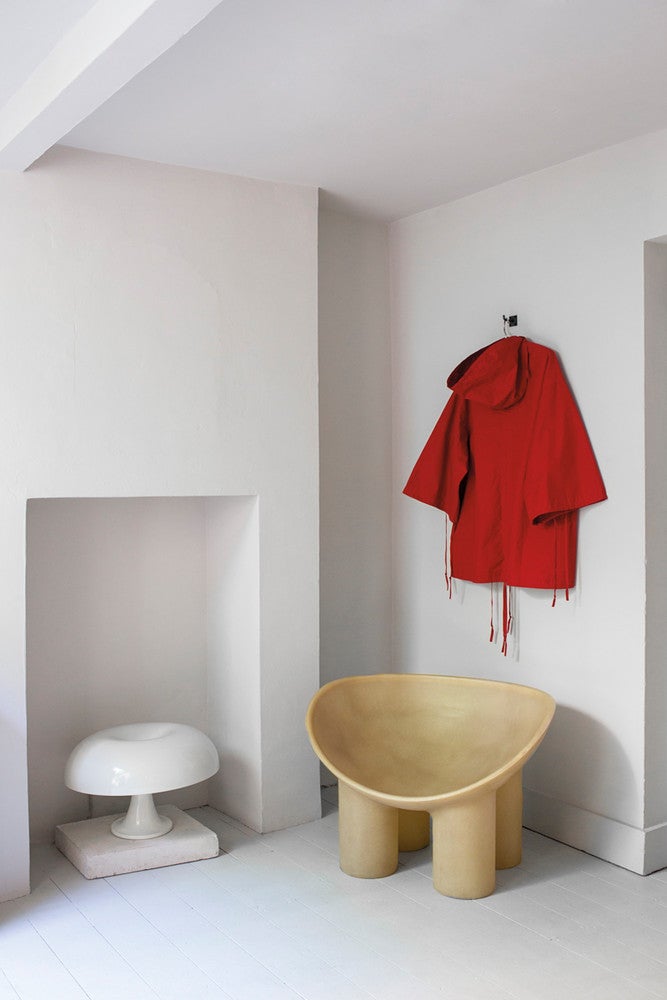 With talents as varied as clothier, ceramist, interior designer, artist, furniture designer, maker, and mother, Faye Toogood is delightfully hard to define. After earning her degree in art history, she had an iconic eight-year run at British design bible The World of Interiors, where she developed her fantastical aesthetic, starting with sculptural still lifes and moving on to high-concept rooms and decoration. In 2008 she launched her own company and has successfully avoided a job title ever since.

The realms Toogood creates are entirely her own, populated by beautiful, strangely human objects. She began her solo career with a series of minimal furniture inspired by the everyday forms on an English farm: milking stools stripped down to stick figures; tables made from brass, wood, and stone.

She also became known for her interior designs, with an attention to detail that touches every aspect of a space—a Toogood project can include “anything from a teacup to a suit,” she says. Now underway: several family homes in London; a Carhartt concept store; and designs for Mulberry, the British luxury goods and leather brand. Toogood’s work has never stayed the same, evolving from natural wood shapes and metal caged furnishings to rounded, childlike edges.

Just take her Roly Poly Chair, which resembles a scooped-out belly on four squat legs (she affectionately calls it the “baby elephant”), or the Roly Poly Daybed, an oblong fiberglass design that balances a smaller sphere on top, like a mother cradling an infant. “That collection came after the birth of my first daughter,” Toogood explains. “Before then, everything was quite angular and aggressive.”

Recently, Toogood and her team of 15 rehabbed a house on Redchurch Street in East London. A tribe of nomadic creatives—architects, designers, and artists who didn’t quite fit in elsewhere and Toogood describes as family—they tend to move every two or three years.

“When we got to the new studio, it was in disrepair. We had to nourish it and take care of it,” she says. The building houses a clothing workshop on the top floor, Toogood and her materials library on the mid-level, and an open gallery and kitchen on the ground floor.

The Herdsman Coat by Toogood; Hagi Stoneware Pot by Faye Toogood for E&Y; The Sculptor Aprons by Toogood

Known for her love of dark, moody blues (seen in everything from her inky interiors for a Mayfair flat to her resin tables in vibrant cobalt), Toogood instead chose a pale silver-gray for the walls of her work space. “Every object looks perfect against it,” she says.

Along one shelf, the light grazes a mottled surface of sand-buffed stoneware—cream and charcoal “chubby” ceramics, handmade from London clay in collaboration with potter Olivia Fiddes. On a peg rail lining the back entrance, canvas aprons hang, ready for the staff to arrive and start their day.

The Painter Top, and The Acrobat Trouser, all by Toogood.

Toogood’s fascination with utilitarian workwear comes from her family. Her grandmother sewed underwear from parachute fabric during World War II, and her sister Erica, now a patternmaker, made a shirt from an old wind sock at age 8. “She’s the tailor and I’m the tinker,” Toogood explains.

Photographer Jacket and Boxer Shorts in Hand-Painted Stripe by Toogood.

The collection began with eight coats for an exhibition in London’s Covent Garden and has since expanded into tunics, pants, and dresses. The clothes range from conceptual art pieces to wearable, practical shapes—a herdsman’s cloak, hand-cut and sewn from Indian paper silk; an oversize smock in crinkly cotton reimagined as a simple painter’s top.

Toogood’s most iconic garment, the beekeeper’s coat, debuted in 2013 in waxed cotton but got an update this year in hand-pieced duct tape. While rooted in tradition, the silver shape has an otherworldly, Bowie-esque presence—a futuristic bent that seems to point in a new direction.

The Farmer Dungaree by Toogood; Spade Chair by Faye Toogood.

It’s a fitting emblem for Studio Toogood, which is its own sort of taped-together beehive, always looking forward to the next project to realize. On any given day, you might find Toogood working alongside her team, making clay maquettes, fixing lunch in the communal kitchen, or assembling wood samples and stones on the shelves—just as she once foraged sticks and stones from the English countryside as a child, bringing them home to make assemblages. “In a way, I’ve been able to return to where I started,” she says. “At my kitchen table.”

From September 16-24, Faye Toogood is bringing together 50 designers, architects, and artists for The Trade Show—a mini furniture fair within the London Design Festival. Each creative donated a piece of their work, and in exchange, Toogood gifted each person a pair of her iconic Spade chairs.

Read more from the fall issue: