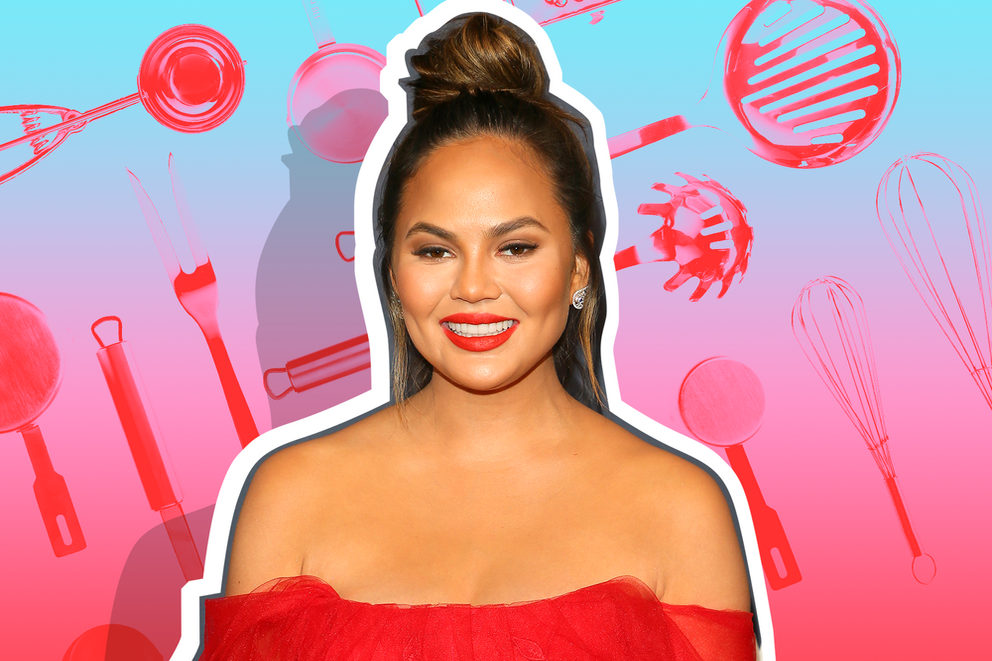 There are a lot of things we trust Chrissy Teigen’s advice for: Twitter clap backs, sex, internet-breaking butt selfies. But perhaps the 31-year-old model’s most credible recommendations aren’t her advice on how to maximize your Instagram likes or shake off a public nip-slip, it’s the way she takes food—from your run-of-the-mill grocery store cereal to your average everyday coffee—to a completely different level.

Since the release of her bestselling cookbook, Cravings, Teigen (who has another cookbook on the way) has been recognized as savvy culinary geniuses. Sure, she doesn’t have a degree from a fancy-pants culinary school or a restaurant known for its gourmet meals. But there’s something about the “Lip Sync Battle” host that makes us not only trust her cooking advice, but want to to rush into the kitchen and try her recipes immediately.

It could be her relatable everyday-girl tone or the way she shares her creations (and cooking failures) on Instagram. It might also be that her food is pretty darn good, which is why she’s sold thousands of cookbooks to date. To prove our case, we rounded up 13 of Teigen’s most mind-blowing food hacks that’ll be sure to elevate your meals and leave your dinner guests with their jaws dropped and stomachs satisfied. Check them out, ahead.

This story was originally published by Jason Pham on StyleCaster.

​The Easy Way to Elevate Your Burger Buns

To make your run-of-the-mill burger buns that much better, Teigen recommends cutting the bun in half, slathering it with butter, and then sprinkling unsweetened coconut flakes on the top. Then, pop those babies into the oven and Teigen swears they’ll come out toasted golden with a hint of tropical sweetness.

Instead of the same ‘ol butter popcorn, Teigen’s found a way to elevate the movie snack to something appropriate for birthdays or any sweet-tooth occasion. To make her cake batter popcorn, Teigen melts down 10 white chocolate bars and stirs it with cake batter mix. Then, she pours the concoction on her popcorn and tosses it with her hands. To finish it off, she scatters on some sprinkles. Pro tip: Teigen recommends buying Pillsbury cake batter mix instead of “those fancy organic Whole foods” stuff.

The Quick Way to Make Your Coffee Taste that Much Better

Teigen is a self-described coffee hater, but the one time she’ll down java is when it’s mixed with her DIY vanilla sweetener. To make her vanilla sugar, Teigen takes 3 to 4 vanilla beans, splits them down the middle with a pairing knife, and scrapes out all the tiny seeds. (They should look like “little vanilla caviar pearls,” she said.) Then, take the vanilla seeds and blend them with sugar. You’ll end up with a smooth, vanilla-packed sweetener that’ll kick your Stevia in the butt.

For a quick salty-sweet dessert, Teigen takes store-bought Frosted Flakes (yup—the same stuff you grew up with) and tosses them with melted butter. Though, be careful not to toss them until they’re soggy. You just want them coated with butter. Afterward, she sprinkles on some salt, and voila, she’s got a salty-sweet dessert topping ready to serve. She recommends putting it on coconut ice cream.

Read more from StyleCaster: Chrissy Teigen Has Had a Secret Food Blog Since 2011, and We Just Found Out

Rent a $15 Refrigerator to Make Your Thanksgiving Easier

To take off stress on Thanksgiving morning, Teigen is big on prepping beforehand, sometimes three days in advance. In an interview with InStyle, Teigen revealed that she chops up all her vegetables beforehand and seals them in Ziplock bags. How she stores all those Ziplocks in her fridge? Well, Teigen actually rents out another one. Renting a fridge isn’t a strictly A-list activity either. According to Teigen, you can rent one for three months for an affordable $15. “Like, renting a fridge is, I think, for like three months, I got one for $15. I was like ‘what the? why doesn’t everyone do this every year?'” she said.

After receiving a lot of flack for posting an Instagram photo of her searing her salmon skin-side up, Teigen set the record straight on why her cooking choice was the only way to go. By cooking her salmon fish-side down, she’s able to get a nice glaze on the meat that she wouldn’t be able to if the pan was simply touching the skin. But that doesn’t mean that she’s not giving the skin any attention. After some time on the pan, Teigen pops the filets into the oven to broil the skin to crispy perfection.

She wrote, “IF ONE MORE PERSON SAYS ANYTHING ABOUT SKIN SIDE DOWN YOUR ASS IS GETTING BLOCKED AND I AM NOT PLAYIN YOU DONT KNOW WHAT I AM DOING THERE IS A GLAZE AND A MYSTICAL THING CALLED A BROILER HOP OFF MY OVEN.”

Mashed Cauliflower “Potatoes” that Taste Just Like the Real Thing

To ensure that her mashed cauliflower “potatoes” taste as much like the original as possible, Teigen steams the vegetable before popping it into a food processor with a hefty hunk of butter, salt, pepper, garlic, and a dab of cream cheese. From there, she just whips it to a fluffy texture than teven the biggest mashed potatoes stans can’t tell apart.

The Genius Way to Elevate Your Instant Top Ramen

Just because she’s a celebrity and married to a Grammy-winning singer doesn’t mean Teigen doesn’t like instant ramen. In fact, the packaged noodles were a huge part of her childhood, which is why she found a nifty way to elevate the store-bought stuff to restaurant-worthy perfection. To up the ante of noodle-less soup broths, Teigen recommends popping in some instant noodles. She did so with her signature Tom Yum broth (essentially a sour-spicy Thai soup) that’ll make your winter days so much warmer.

Combine Cheese with Guacamole for Burgers

Walk into any burger joint and you’ll likely see an option for a guacamole cheeseburger. Teigen took the California diner staple and made it so much better by mixing cheddar cheese into her guacamole. Once you sandwich the mix with your patty, the guacamole-cheese mixture melts into an ooey-gooey topping better than any sliced cheese you’ll find at a lunch spot.

To avoid chewy awful potatoes, Teigen has a found a foolproof method to cook your studs crispy and soft every time. She recommends heating your pan with oil for 10 minutes before dumping in the potatoes to avoid uneven cooking. Half way through, Teigen says to flip them and you’ll end up with perfectly cooked roasted potatoes.

This Mind-Blowing Hack for Softening Butter

If you’re looking to soften your butter and not completely melt it, Teigen has a solution for you. Here’s what she does: She takes a microwavable measuring cup and fills it with water. She pops the cup into the microwave on high for two minutes. Then, dumps out the hot water and places the cup face down over her stick of butter. After some time, the butter should be soft enough to cut and use.

Searing scallops can be tricky, but Teigen has found a way out. Instead of using flour to dry the seafood, like some other chefs recommend, Teigen takes a simple paper towel to remove any dampness. After letting the scallops sit on the paper towel for 45 minutes to an hour, Teigen begins cooking. But instead of using butter or oil to sear the scallops, she mixes both. Using a half canola oil, half butter mix, Teigen sautés the scallops on a hot pan to get them perfectly golden brown.

Her Nifty Trick for Picky Eaters Who Don’t Like Veggies

To make sure even the pickiest eaters are getting their greens in (a.k.a. her dad), Teigen recommends taking vegetables like broccoli and cauliflower and cutting off the florets, leaving her with just the stems. She sautés the stems with olive oil, pepper, salt, and chili flakes into a dish that even the pickiest anti-vegetable eaters will want in on.