Here’s How to Actually Cook a Turkey

Consider this your Thanksgiving cheat sheet. 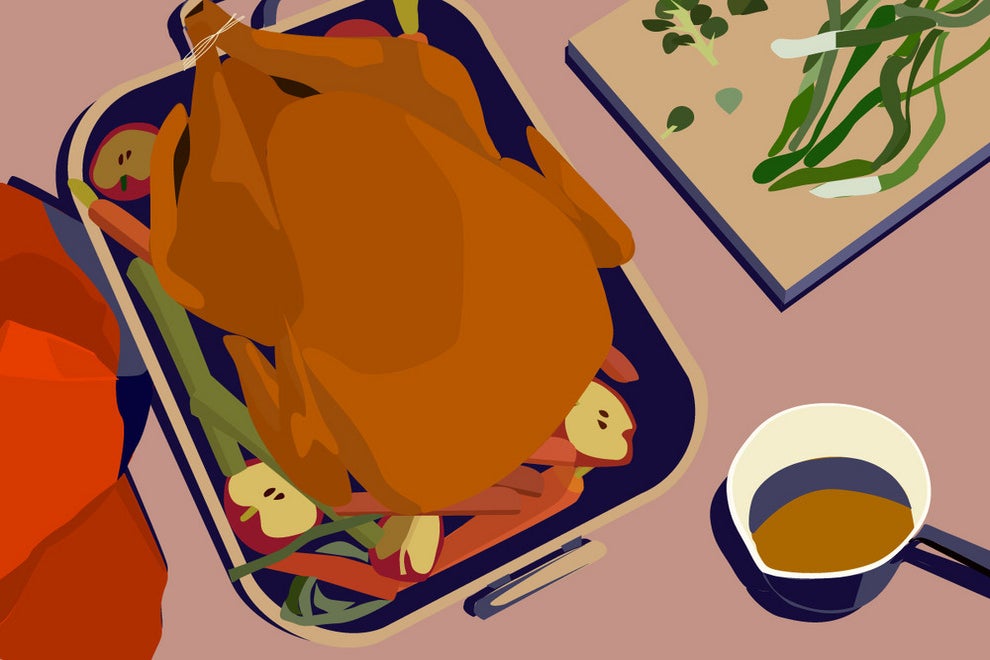 Anyone who has ever hosted Thanksgiving dinner understands how stressful it can get. It’s a lot of pressure feeding a crowd—especially one that consists of your closest friends and way too opinionated family members—on a holiday that’s all about the food. Not to mention, the thought of cooking a 12-pound turkey into juicy brown, crisp perfection sounds like the most intimidating task of them all.

If you got stuck with the hosting duties this Thanksgiving and have no clue what you’re doing, we’re here to help. We asked Gustavo Lopez, executive chef at Clay Restaurant in New York City, for everything you need to know about cooking your first successful turkey. Follow these tips, and you’ll be good to go.

A frozen turkey will save you time.

While everyone likes the idea of a fresh turkey, there is one upside to going frozen: When buying a frozen turkey, you can grab one early enough to beat the Thanksgiving rush. And how big of a bird should you buy? “I usually estimate 1.5 to two pounds per guest on the bone,” suggests Lopez. “A 12-pound turkey would be ideal for a party of six, so there’s plenty for leftovers—the best part!”

“I like to start preparing the turkey the day before I plan to serve it,” says Lopez. “If you’re starting with a frozen bird, you should allow at least 24 hours to thaw in the refrigerator for every four pounds.” Think three full days for a 12-pound bird.

Brining is a game-changer for a tasty turkey.

“A brine is a salt solution bath used to add moisture and flavor to protein,” says Lopez. (For a complete recipe, check out our guide to brining here.) A few things to remember about brining: Make sure to add enough liquid to cover the entire turkey, and add herbs and spices for flavor.

Plan on brining your turkey for 12 hours, occasionally rotating your bird in the mixture. Once you’re done, give it a quick rinse, and pat it dry with paper towels. “A dry bird is the secret to crispy skin,” says Lopez.

Truss the bird for an evenly cooked turkey.

“Trussing means to tie the legs and wings of the bird to its body so they don’t burn, thus helping the turkey cook more evenly,” says Lopez. It’s not a mandatory step, but it helps. “To truss the turkey, place it breast-up on a cutting board, and tuck the wings under the body,” says Lopez. “Wrap kitchen twine around the neck bone, cross it around the wings, and knot under the breast. Finish by tying the legs together at the end, and knot securely so the turkey is tight like a bundle.”

Before putting it in the oven, coat the turkey with a thin layer of oil that contains a high smoke point (Lopez likes using a high-quality canola oil), and season the bird with salt and pepper. Place your turkey on a roasting pan, and add a meat thermometer in the thickest part of the breast region: That will tell you whether the meat is fully cooked or not.

“As for cooking time, give it about 12 minutes per pound,” says Lopez—this translates to two and a half hours for a 12-pound turkey. For the first half hour, cook the turkey in an oven on 500 degrees, and then lower it to 350 for the remainder of the cooking time. “Cook until the thermometer registers 155 degrees,” says Lopez.

Save the stuffing for the table.

While it’s tempting to add the stuffing inside the turkey before roasting, Lopez says it’s best to prepare it apart from the turkey, in order to avoid overcooking the bird. If you want to add some flavor, use ingredients such as onions, sage, and rosemary while roasting the turkey, and leave the stuffing for after it’s cooked and cooled.

Basting is optional—but it does provide some fantastic results.

Basting a turkey serves multiple purposes, including keeping the meat moist and preventing burning. It’s also responsible for that brown, crispy skin everyone on the table is obsessed with. Here’s how to do it: Using a baster, collect drippings from the bottom of the roasting pan and coat the turkey as evenly as possible for 20 to 30 minutes, while it’s cooking in the oven.

And here’s what to do with that bag of giblets.

Since most turkeys are sold pre-cleaned, all the organ meats are stored inside a bag in the cavity of the bird—and according to Lopez, they make for great gravy. “I try to use every part of the animal,” says Lopez. “These giblets make a delicious addition to gravy or stuffing, or can even simply be pan fried. The neck is fantastic to add to leftover bones for stock!”

Carve the turkey before serving.

Sure, a fully assembled turkey might look good on a table setting, but you’re not doing your guests any favors—they’ll be ravenous by dinner. Carving the bird before serving makes it so much easier for your guests to grab their food.

“Before carving, it is essential to let the bird rest for at least 30 minutes. Make sure it’s covered and in a warm place,” says Lopez. “After resting, place the turkey on a carving board and remove the trussing.”

Here’s how to successfully carve a turkey: First, remove the legs by cutting through the sling that connects the leg and the breast with a boning knife. Push the leg down as you cut down to the bone. Then, cut through the joint to separate the leg, and separate the thigh from the drumstick and wing. Repeat on the other side.

Once you remove the legs, slice down from the top of the breast using the tip of the knife against the rib bone, in order to remove as much of the meat in one piece as possible. “Once the breast begins to fall away from the bone, cut the bottom edge to separate completely, and repeat with the other side,” says Lopez. Once you’re finished, slice the thigh and breast meat.

8 Thanksgiving Staples and Their Healthy Alternatives Thanksgiving Dishes You Won’t Believe Are Vegan The Best Thanksgiving Recipes, From Cocktails to Make-Ahead Sides