$8 Hooks Play the Cleverest Role in This DIYed Homework Zone 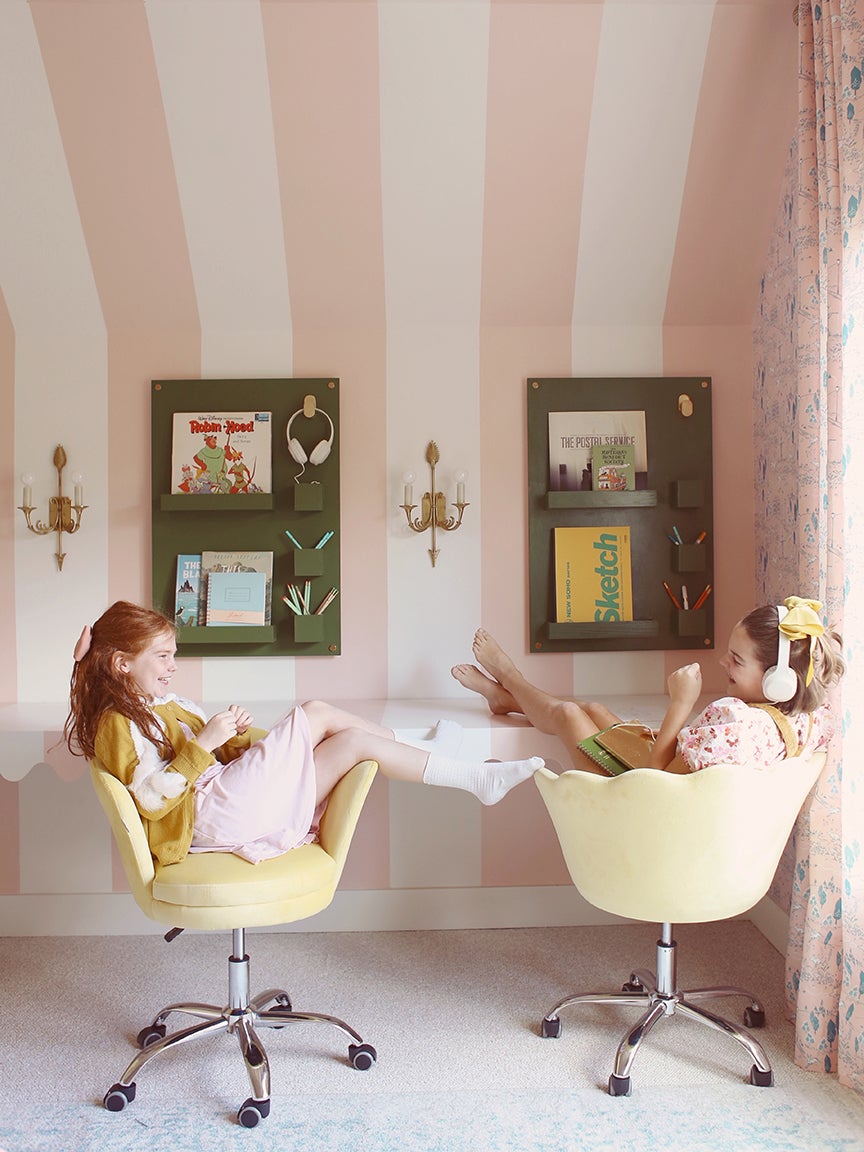 What’s the point of having space for guests if no one ever sleeps in them? That is the question Chip and Joni Lay pondered after a year of lockdown, during which their spare room had been slowly turned into a toy dumping ground for their daughters Vivi (10), Brigette (8), Ellie (5), and Marjorie (2).

The last year had also highlighted the need for each sister to have her own dedicated homework zone: “They were remote learning for a few months, and we didn’t really have a good place for them to focus,” says Joni. “School papers and supplies were just everywhere.” The idea for the girls’ study was born.

After sketching out an initial budget that was almost twice as much as they wanted to spend on the project, the couple quickly realized they’d have to roll up their sleeves (and swap in some on-the-cheap decor finds) to pull it off. Their background in industrial design came in handy, but dedicated DIYers can create a similar space, too, by following some of the Lays’ hard-earned takeaways.

The room came together around a powder pink toile wallpaper (and matching curtains) from Spoonflower. “I was trying to decide on a pattern to use, and my 8-year-old loves animals, so that request came from her,” explains Joni, who found the perfect complementary paint color right around the corner in her 2-year-old’s room: Quaint Peche by Sherwin-Williams. Next came the showstopping cabana stripes. She wanted them to wrap over the whole ceiling for a tentlike effect (the rooflines actually worked in her favor) and used a gloss finish to create a difference in sheen.

Pro tip: This laser tool will suction itself to the wall, enabling you to tape a perfectly straight line.

Meanwhile, Chip imagined a floating wall-to-wall desk for the girls, featuring a playful scalloped edge. He used simple pipes drilled into the wall studs to hold everything in place and birch plywood for the top and wavy border, which he cut with a jigsaw. “I wanted it to look like it melted into the wall,” notes Joni. To really make the desk blend in, she continued the stripes over the entire surface.

Pro tip: For expertly curved corners, make tiny cuts on the inside of the quarter-inch plywood, then soak it in the tub for an hour so the wood is extra bendy before tacking it to the front of the desk with a nail gun.

The wall-mounted organizers above each workstation are another plywood base, to which Joni attached inexpensive wood planters from Michael’s in varying shapes and hung them using brass standoffs. “I had this picture of a listening station from a record store that I used for inspiration,” says Joni, who spray-painted the pieces avocado green. “I was trying to figure out a way to make it easy for them to keep things organized and put little doodads on display.”

To complete the look, Joni ordered two more of the yellow scalloped desk chairs she had bought for her eldest daughter on Wayfair, which serendipitously matched the desk. But almost everything else, from the floral sofa to the vintage chandelier, was picked up on Facebook Marketplace and Etsy for a song, which shaved $3,000 off their total budget. “I had a style board I put together with an $1,800 sofa, which isn’t even that crazy expensive, but I ended up finding one for $400,” she says.

Pro tip: Use your own photography for artwork, like the Wes Anderson–esque picture of Joni’s girls in vintage tennis outfits that she had blown up for the room. The lesson? You can add oodles of personality to a space without having to make a huge investment.