The sets and interiors of the beloved “Gilmore Girls” always had a certain cozy boho chic. Here’s what we’ve learned about home design from years of watching. 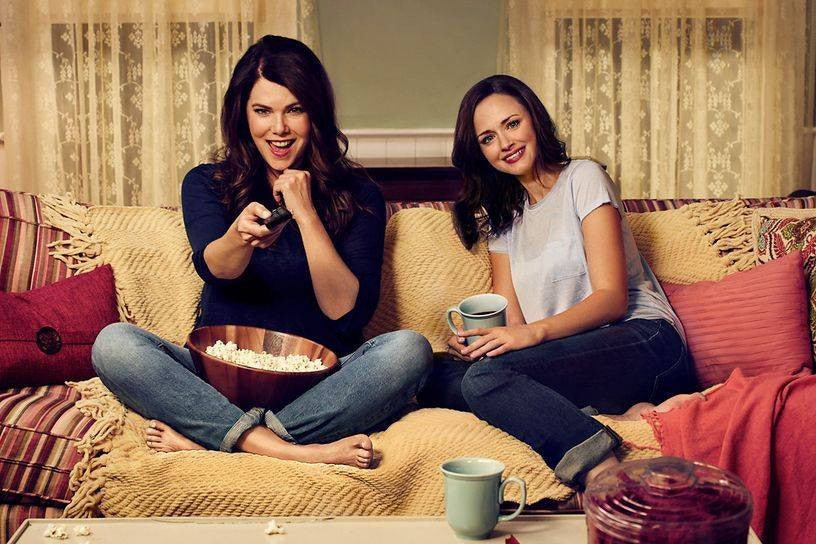 Gilmore Girls is back, and just in time for a Netflix binge watch this holiday weekend. If you’ve been boned up for a marathon viewing by collecting red wine and looking back over classic episodes the early ‘00s series, you might be struck by how well you remember the cozy, boho interiors of the key sets: Lorelai’s house, Luke’s Diner, the whole of Stars Hollow.

Among all those distressed couches and mismatched prints, there’s something more than memories, though. There’s lessons in how to (and how not to) create spaces for yourself.

Now, those heavily ‘90s-influenced, Lilith Fair-leaning interiors aren’t exactly examples of good, unified design (just as all those flocked skirts aren’t good, timeless fashion). They are, however, filled with warm, inviting touches and plenty of little charms to hold on to.

Clutter is Not Always the Enemy

Couches that seem to have been lived in, reupholstered, and lived in again. Tables that have nothing to do with their chairs. Prints on prints on prints. Things on things on things. Yes, Lorelai’s place is a bit of a grab bag of finds and veteran pieces—but there’s something to it all. It speaks of emotional connections to pieces, rather than the imprint of some lofty, engineered design aesthetic, of a life spent collecting things rather than a big, single spend on a living-room set. It’s the definition of “homey”. Works for Luke’s mismatched mug collection at the Diner, too.

Although… It Totally Can Be

Think about it, would you actually want to stay at the Dragonfly Inn? All those patterns and tchotchkes everywhere would be darned claustrophobic after, dunno, 15 minutes? 10? When being shabby, eclectic, and homey in one area, it’s important to counterbalance with some clean, pure spaces elsewhere, if only to give you poor eyes a rest.

Christmas Lights Are for All Seasons

Stars Hollow, as the troubadours and Ms. Patti are always impressing on us, is a sort of magical little treasure somewhere out there in Connecticut’s semi-tamed hills. But wouldn’t it be just another cute, tiny town if it didn’t rock Christmas lights all year round? Possibly! Look, just don’t be afraid of the cliché here when it comes to your outdoor space. Some cliché’s are good!

Your Kitchen Island Is a Tool and a Meeting Place

There’s a temptation to decorate and treat your kitchen island as another fixture, keeping it perfectly neat and clean and covering it with centerpieces and such. Resist it. For Sookie—a true culinary icon—it was a place of wonderful chaos, creation, and the place for many a dress down about Chris, Luke, and all of Lorelai’s various man issues (there were many man issues). The space should be functional and fun. Cover it with cutting boards, cooking utensils, and keep the key bowl, the mail, and other things you don’t want covered with flower elsewhere.

Gilmore Girls is perhaps the one series brave enough ask the question: Can you ever have enough pillows and blankets lying at the ready? The show left us on a cliffhanger in 2007. Hopefully, the Netflix run will give us the answers we’ve been waiting for.

Perfect Can Be Too Perfect

The posh, Colonial interiors of the elder Gilmores’ mansion are—and were intended to be—intimidatingly perfect. Just as it took Lorelai several seasons to warm up to her parents and finally relax at their house, it might take a lifetime to find a way to chill in a space that’s set up more for show than for entertaining. Signaling your status with chairs no one wants to sit in and a table people will be afraid to spill wine on isn’t exactly inviting. Also, wall-to-wall carpet and chandeliers at near eye level are a bit much, yeah?

Every Space and Every Place Could Use Its Own Kirk

He’s a handyman, a salesperson, a jack-of-all trades and, though a master of none, so much more. Indeed, what interior wouldn’t be brighten by the presence of its own, surly Kirk?