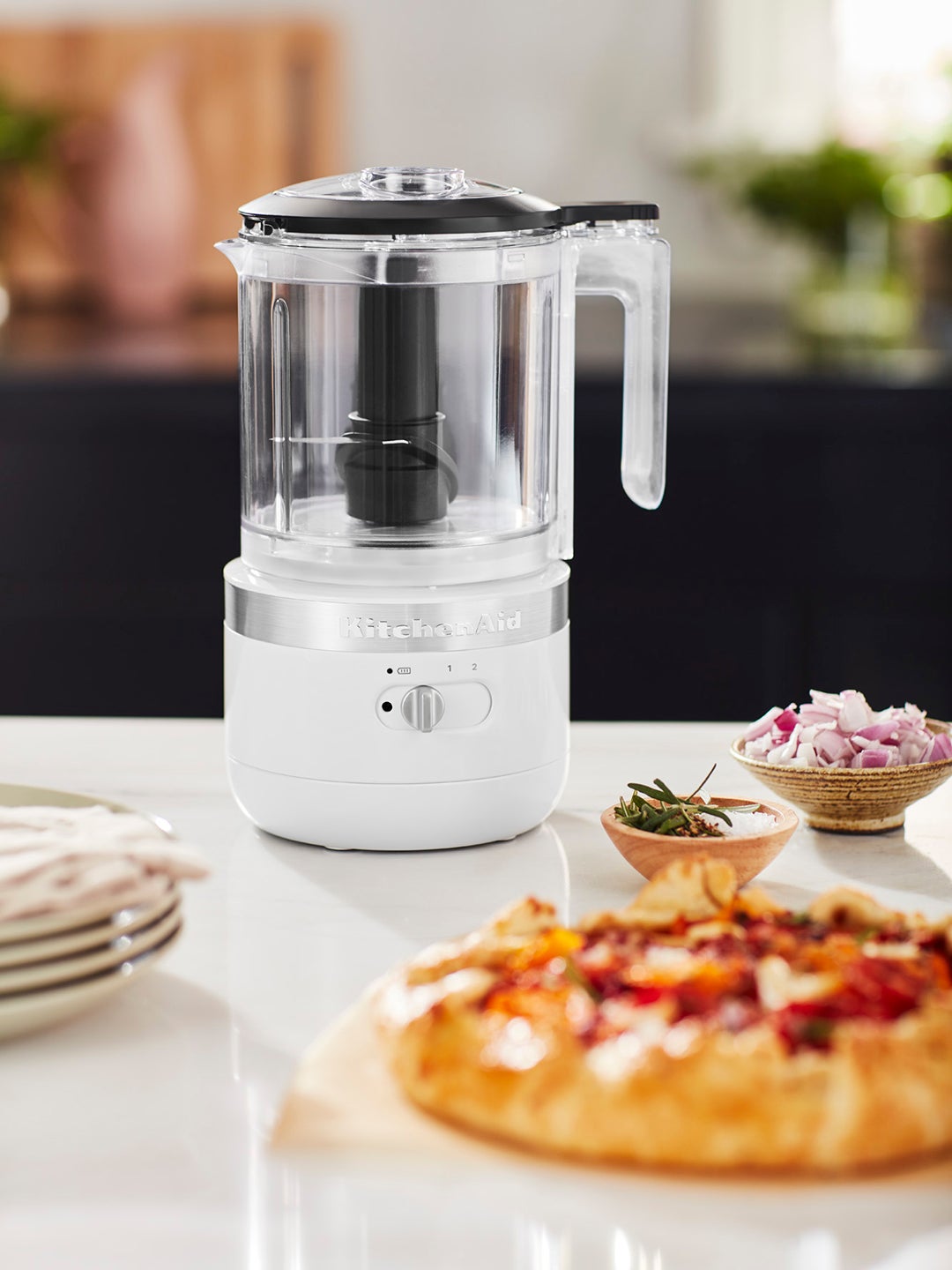 In my small New York City apartment kitchen, I have a power strip mounted to the side of my butcher block kitchen island, which plugs into another power strip, which plugs into an outlet behind my microwave. It’s a fire hazard, but it’s the only way I’m able to use my “counter space” to blend green goddess dressing or mix banana bread batter. Well, that was the case, until I tried KitchenAid’s new cordless appliances.

Instead of being a prisoner to the outlet proximity, I can bring a hand mixer, immersion blender, or five-cup mini food processor (the three appliances in the new line, available for $99.99 each on KitchenAid.com) wherever I want. If I wanted to chop five onions while watching The Notebook on the couch, I could (double tearjerker). But I’ll probably stick to bringing the immersion blender over to the stove when I want to make Ina Garten’s creamy tomato soup. Now, I no longer have to carefully hold the far-too-short cord over the hot pot while using the stick blender with my other hand, hoping I don’t get red tomato splatter all over myself.

All three of the new appliances work the same. You can “quick charge” them by plugging them in for 10 minutes, which provides enough juice to make a quick batch of cookies with the seven-speed hand mixer, to blend a smoothie or batch of homemade aioli with the immersion blender, or to chop up to 11 onions (per KitchenAid’s very specific calculations) in the five-cup chopper. Two hours of charging time will give you dozens of uses; I tested each appliance over the course of three weeks and have not had to charge any of them after making salad dressing, blended soup, brownies, white bean dip, green sauce, chopped mirepoix, and shredded chicken breast. (Pro tip: You can shred cooked chicken using the hand mixer in about 30 seconds!)

In addition to being luxuriously cord-free, all the appliances are lightweight and have relatively slim profiles and sleeker designs than the brand’s traditional corded versions. The hand mixer is designed to stand on its own (rather than resting in or against a bowl), so you can set it down easily when alternating between dry and wet ingredients (no more knocking batter all over the counter). The two-speed mini food processor is incredibly powerful and also comes with what they call a “whisking accessory” that can be used to whip cream, stir, and whisk when the blade is running, but I found it more impactful for helping to push ingredients down toward the blade when making sauces, particularly herby ones. And the hand blender can be turned into a food processor if you buy the whisk and chopper attachment for $50 more, effectively making one appliance into three. For now, they all come in matte black, but KitchenAid plans to offer more colors this summer.

With my new cord-free appliance life, I no longer have to complain about finding outlet space, tugging on cords, and almost burning myself when carefully blending hot soup. I guess I’ll have to focus all my energy on complaining about dishwashing… or put it toward finally making Samin Nosrat’s focaccia.