The den is really something else. 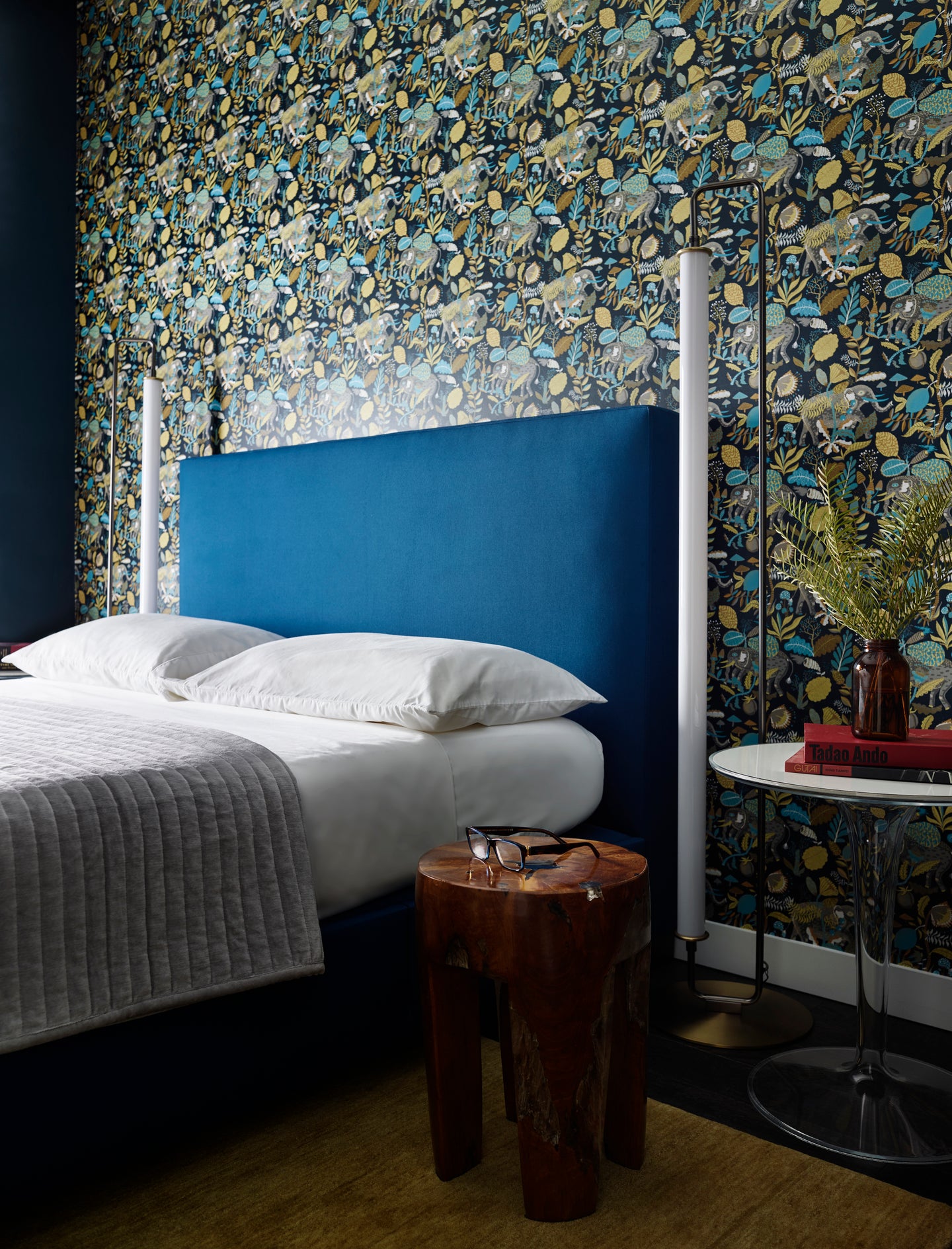 Danish and Italian upholstery, a Louis Philippe–style mirror in the entry, and bold splashes of color are just a handful of the inspired design moments we found in this San Francisco condo. That said, the true pièce de résistance might just be the hand-painted wallpaper in one of the bedrooms. Well, according to us anyway.

When interior designer Christine Lin, principle of design studio Form + Field, came upon the newly built condo, it resembled something akin to a nondescript white box. Lin took that as an opportunity to reinvent the home with bold paint, patterned wallpaper, and a slew of storied decorative accessories to boot.

Her client’s Southeast Asian heritage was a major influence in the design scheme—his penchant for color an added bonus. The result was a home that embodied an eclectic yet contemporary aesthetic, with nods toward the traditional and the client’s tailored style.

Armed with the intention of channeling the bright colors consonant with the Indian culture, Lin knew that she would be taking an unexpected approach to the home’s palette.

“From the beginning, our directive was to avoid neutral colors,” Lin recalls. “He especially loved red and blue, so we chose to bathe the bedrooms in blue to create calm, restful spaces, while burgundy was perfect for the dark entryway and den area that lacked natural light.”

Throughout the home, you’ll find unique pairings of complementary hues coupled with juxtapositions of blue and mustard and green and red. The long and narrow den area off the entry was an opportune decorative moment for the scheme. Given that it’s the first spot you see when you enter the apartment, Lin furnished it with a dramatic sofa and a vividly colorful background to match.

“One of the early requirements was to design a custom walnut shoe cabinet with a statue of Ganesh, the Hindu deity known as the remover of obstacles and the patron of arts and sciences, on top,” says Lin of the pale green stone Ganesh sculpture, which they had specially made and shipped from India.

Given that finding space for storage is a such a challenge in San Francisco, the designer had to get creative when it came to optimizing every square foot of the home. Custom-upholstered beds were made with built-in drawers, and a floor-to-ceiling built-in cabinet was integrated into the den.

With the eclectic array of colors in the home, Lin found herself walking a fine line between the bold and the extravagant. “The client didn’t want over-the-top, so we had to create a design language that didn’t feel that way despite the intense color,” says Lin. “The modern furnishings and subtle textures create balance.”

According to Lin, a great deal of thought was placed on the experience of moving throughout the home. Upon entering, you’re greeted by the moody and narrow entry, which lacks natural light, and yet, as you make your way through the home, the oversize windows and sweeping views of the San Francisco Bay become increasingly more apparent, lending the rest of the home with a sense of openness and airiness.

“We wanted to intensify the individual experiences of the rooms and play up their strengths, and we did that through the juxtaposition of these rich, colorful rooms against the clean white walls in the living and kitchen, which are at the center of the home,” Lin notes.

In turn, the kitchen would take on a strictly minimalist scheme. Nearly void of color, the sleek and streamlined qualities of the space are elevated by pops of color, such as the Gubi counter stools, which channel the chromatic motifs found in the home. The contrast of the black-and-white palette establishes a high-impact finish while remaining relatively pared-down.

The living room, situated directly adjacent to the kitchen, came primed with a slightly more daring scheme. The Michael Anastassiades Tube Chandelier makes a subtle statement, and the sofa, while upholstered in a teal fabric, remains unassuming courtesy of its clean lines and solid build. A simple marble-and-steel coffee table helps offset the vibrant rug, tying the eclectic elements of the room together.

“Despite the differences in color, what makes the kitchen and living spaces feel cohesive are the simple geometries, high contrast, and lack of clutter,” says Lin of establishing a continuous flow between the two areas.

In the master bedroom, hand-painted wallpaper (Crystalline from Vahallan) became the undeniable showstopper of the space. “We love how it plays off the subtle, matte finishes in the rest of the room,” says Lin of the print’s reflective quality, made to resemble the inside of a geode. Channeling the cool blues and moody tones of the wallpaper, Lin took a complementary approach to the rest of the room’s decor, which resulted in a serene finish inspiring a sense of reprieve from the vibrant nature of the home.