With a view of the tree that inspired it all. 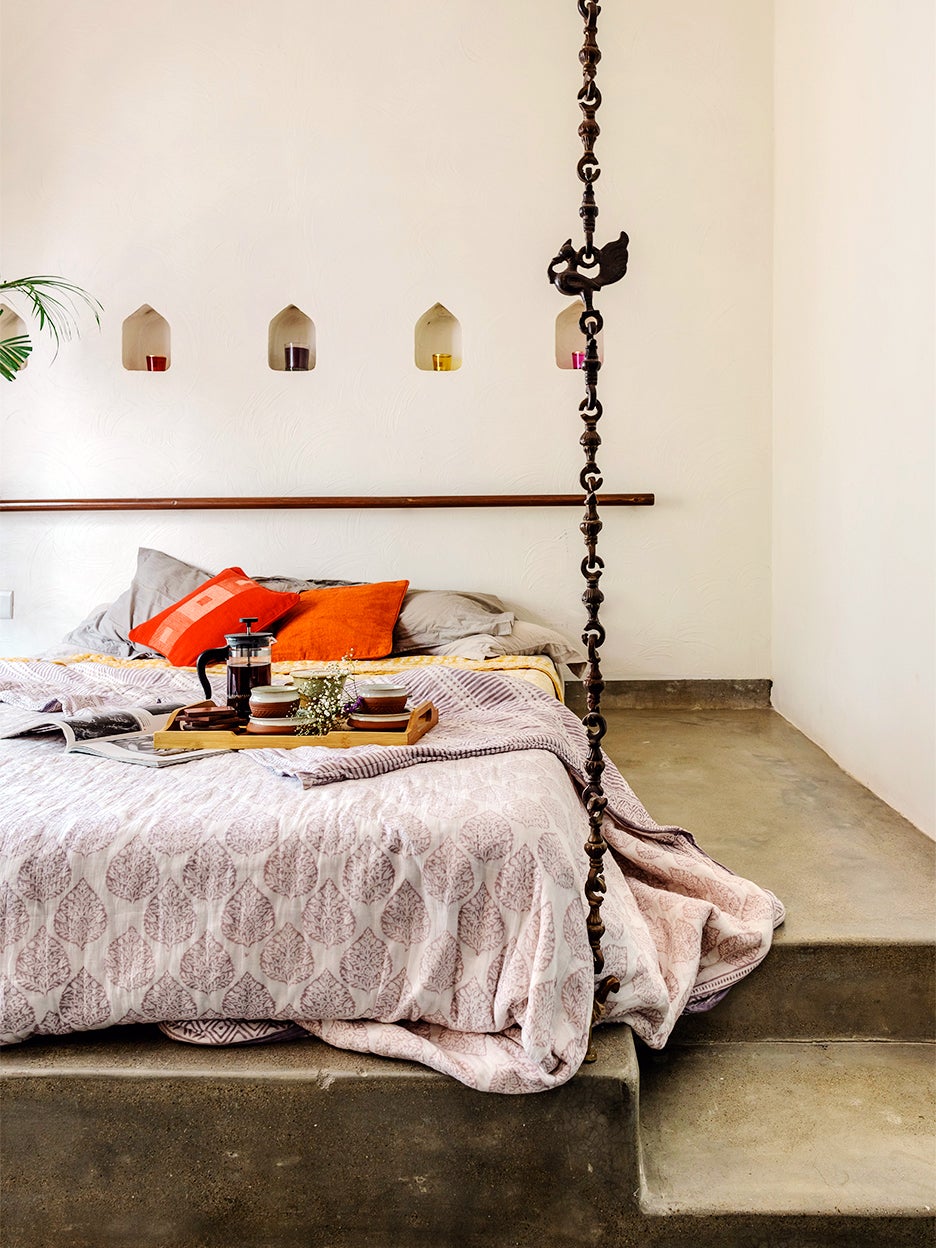 When Satviki Trivedi tore down one of the walls in the kitchen of her Ahmedabad, India, apartment, she discovered something unexpected: A neem tree so green and lush that it immediately filled the home with its presence. “I was so excited to invite that tree into my space,” says the 26-year-old interior designer. And so she did, at least metaphorically—adding green tiles and flooring to the kitchen to mirror the foliage and opening up her one-bedroom to nature.

With a little help from her parents, Trivedi bought the place seven years ago, determined to transform it. Though the 40-year-old building is surrounded by nature—including many species of birds and even some monkeys that now pay Trivedi the occasional visit outside her windows—the inside hardly revealed that. Walls blocked out natural light and made the space feel far smaller than it actually is. A gut renovation was the only option.

That meant a lot of effort on the part of her contractors, who cut away at heavy marble floors and 9-inch walls, which resulted in both a solution and a new problem. The apartment felt airier and more expansive, but now they had lots of waste—which they had to tow down four flights of stairs at a cost that was out of Trivedi’s budget. So she came up with an idea: They’d keep that scrap material in the apartment, strategically arrange it, and pour concrete over it to create varying levels in the flooring of her bedroom.

That wasn’t the only nontraditional proposal that the designer presented to her contractors. They also created the textured pink wall in the living room by applying a mixture of concrete and water directly to the surface, then painting (without a primer) directly on top of the result. “In the morning, the pink shines, but in the evening, you see a play of shadow,” says Trivedi. “It’s almost like a waterfall.”

This apartment was Trivedi’s first-ever renovation project, so she felt she had to prove herself—especially to her crew, who weren’t always on board with her unconventional ideas. “So many times they said to my face, ‘Madam, I don’t think this is going to work—please get some other people’s opinions first,’” she says. “I was like, Oh, my God, don’t make me self-doubt.” But ultimately, when construction was finished and the team came over for a celebratory lunch, they marveled at the final outcome.

While her design departed from the style of a typical Gujarati home, Trivedi still wanted to pay homage to her culture and surroundings. She filled the apartment with handcrafted furniture and natural materials like brick, teakwood, and ochre-hued jaisalmer stone. In her second bedroom-turned-den, tall bamboo poles provide support for a screen that rolls down to become a mini movie theater, with the help of a small projector.

Built-in alcoves for candles in her bedroom are inspired by Diwali, the Hindu festival of lights, while the brass chains that extend from her bed’s platform to the ceiling are traditionally used for swings found on the verandas of Gujarati homes. In the floor of her living room, Trivedi inlaid earthen bowls typically used to make rotlas, a type of Gujarati bread. And in her kitchen, she built a cabinet with 48 niches that she filled with clear jars of Indian spices, making them easy to grab—much to the satisfaction of her father, who happens to be a chef.

In a space of her own, Trivedi—who never considered herself a great cook—finds herself gravitating toward the kitchen more and more, whether she’s entertaining family and friends, cooking the idli and rasam she came to love living in Bangalore years ago, or simply admiring that beautiful neem tree. “Every morning, there are birds that practically barge into the house and start chirping, as if they’ve become my family,” she says. “I’ve developed a habit of waking up early, playing my music, and cooking my breakfast. Sometimes my neighbors will text me, ‘Today seems to be a good day.’”