Minimalist down to the half fridge. 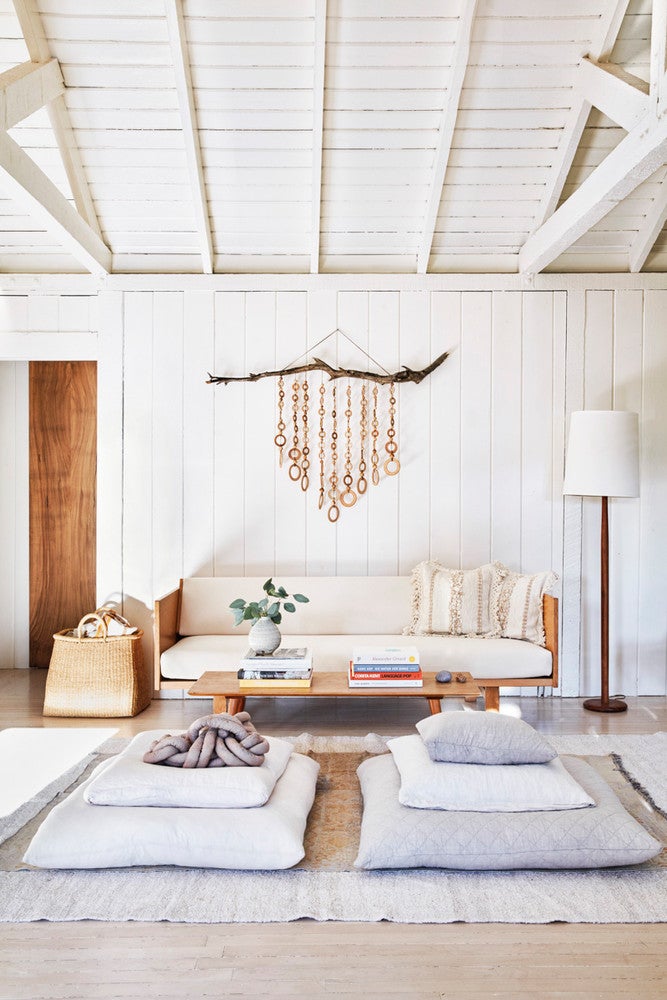 This story originally appeared in the Winter 2016 issue of Domino, titled “Canyon Cool.” Subscribe to be the first to receive each issue.

If you have spent any time fantasizing about living the California dream life in the Los Angeles hills of Topanga, you’ve probably lingered a while on Serena Mitnik-Miller’s Instagram account (@maraserene) and her well-searched hashtag, #OurTopangaHome. The artist and owner of General Store, a thoughtfully curated lifestyle shop with locations in Los Angeles and San Francisco, shares a cottage with her husband, designer Mason St. Peter, and their newborn son, Wild Hawk Moon. It’s only a 30-minute drive to their store on busy Lincoln Boulevard, but that seems an entire world away. The homestead, originally built as a one-room hunting cabin in 1927, can be hard to leave.

“We use the stove a lot,” says Mitnik-Miller, who is refreshingly candid about the work that goes into crafting a woodland aerie and artfully embraces imperfection. When the couple bought the house, after years of splitting their time between a rental apartment near the shop in San Francisco and a makeshift cabin they built on a friend’s property nearby, they knew the restoration would be a labor of love. “Only three or four people have owned the house, but they all added on, and the layers have accumulated over time,” says Mitnik-Miller. “Mason and I worked hard to strip it down. It was so fragile that we did most of the demo ourselves.”

“It feels really good to be a bit far away from everything.”

Making things—and creating unexpected spaces that are minimal yet warm—is what Mitnik-Miller and St. Peter do best. “Since we opened General Store, I’ve had this desire to live with less and less. Everything we sell is so carefully selected,” Mitnik-Miller says, “and that carries over to where we live.” At home, they mixed mid-century pieces with furniture made by friends. The kitchen equally channels their minimalist leanings, with budget-friendly plywood cabinets and a half fridge tucked under the counter. In the living room, oversize pillows and cozy rugs create the perfect spot for an afternoon nap.

Natural materials ground the home, whether copper and brass fixtures in the bathroom, a wood mobile in the nursery, or cozy sheepskins in the bedroom.

advertisement
“Since we opened General Store, I’ve had this desire to live with less and less.”

Mitnik-Miller treats her plants like sculpture, playing with different sizes and leaf shapes. For a streamlined look, she selects simple clay pots in similar shades.

Now that most of the work on their house is complete, the couple can rest a little— especially since welcoming their son. “It feels really good to be a bit far away from everything,” says Mitnik-Miller. Up in the canyon, the California dream lives on.