He even snuck in an IKEA hack. 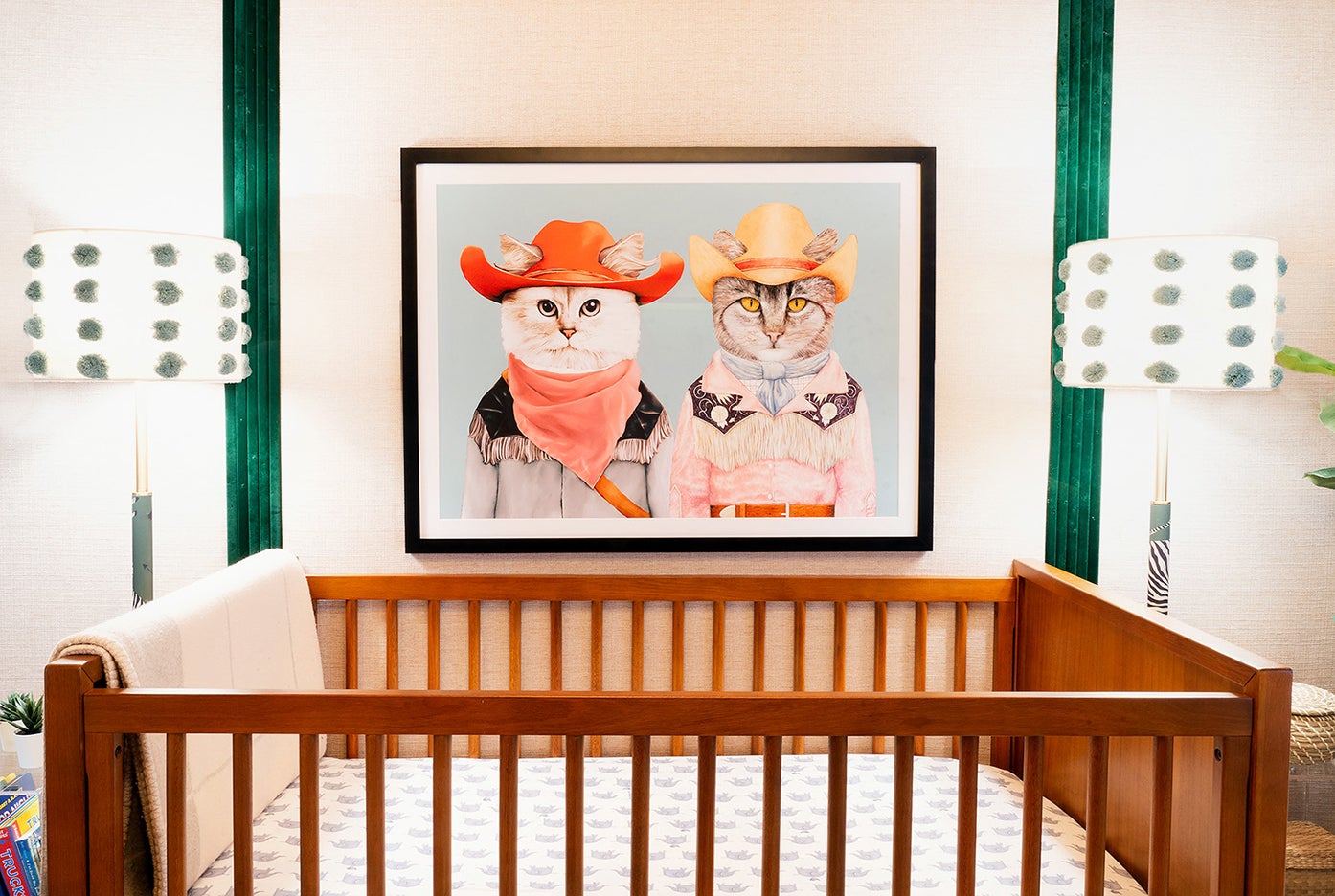 In December, New York City–based fashion designer Brandon Maxwell thought he was heading to Austin for a few months to recharge, spend time with his sister Kady (who is expecting), and design his new collection. Instead he fashioned a whole other identity: interior designer. When he arrived in the Lone Star State, he realized that Kady, a full-time teacher, hadn’t begun putting together a nursery.

“It really all started with us going into Joann Fabrics one day, and I said, ‘Let’s just see what your vibe is,’” recalls Maxwell. “And of course, me in a fabric store is a nightmare, because I want everything.” They left with rolls of cream tweed and a grand plan—dramatic floor-sweeping curtains and fabric-covered walls and furniture for a luxe, uptown feel.

But as most creatives know, dreaming is one thing; doing is another. “In front of my sister, I was like, ‘It’s gonna be totally fine. I know exactly how to do all of it. No problem. I’ve got it on lock.’” he says. “Meanwhile I’m coming home to my Airbnb at night, furiously YouTubing every DIY thing in the world on how to do this.”

Thankfully he had a lifeline, his Airbnb host, Erin Driscoll Thornton, who just so happens to be a friend of a friend and, most important, a designer and all-around creative. Together the pair were able to pull off an IKEA hack, custom lighting, and, yes, the velvet-piped fabric walls Maxwell envisioned from the start. “My version of the nursery would have just been stapled fabric draped on the wall,” he says. “But Erin gave us the Ralph Lauren dream.” And when his sister saw the space? “She didn’t leave it for two days, because she was like, ‘I can’t believe it!” he says. Here’s how they pulled it all off in just nine days.

To give the room a soft, plushy feel (and to muffle noise from the inside and outside), Thornton and a handyman stapled Dacron, a polyester batting, directly to the walls. She then layered the tweed fabric (cut into panels) on top, stapling only along the edges of the fabric. To cover the staples and give the room a British racing green piping, she used a holy grail product she found on Amazon: sticky-back velvet, which she stuck to wood trim that she later nailed into the wall.

On the ceiling Thornton used a similar process, but with sheet wood panels padded in Dacron, then covered in burlap. The switch to wood tiles and burlap was purely utilitarian: She was worried that tweed might sag over time.

Maxwell also envisioned padded furniture, and his sister had already bought two IKEA Pax wardrobes for the space. Thornton took his idea to the next level by wrapping the inside shelves with Scalamandré peel-and-stick wallpaper, another Amazon find. She finished the look with new drawer pulls.

To customize the lighting, Thornton wrapped inexpensive Amazon lamps with the same Scalamandré wallpaper in the wardrobe and topped them with Anthropologie pom-pom shades. Another bright idea? She swapped the Pax’s knobs with new toggles. To finish the look, they added rodeo-themed art from Etsy.

So…is this the beginning of Brandon Maxwell Interiors? “If I had my choice, home would be my next venture,” he says. “I don’t talk about it a ton, but so much of my inspiration for clothes comes from interiors.” And we think he’s found his design partner: “Once we finished the nursery, I was already thinking of other things Erin and I could do!”

To see the whole process in action, peep this video Maxwell made about the project: