Bonsai Trees Are Trending—Here’s Your Guide 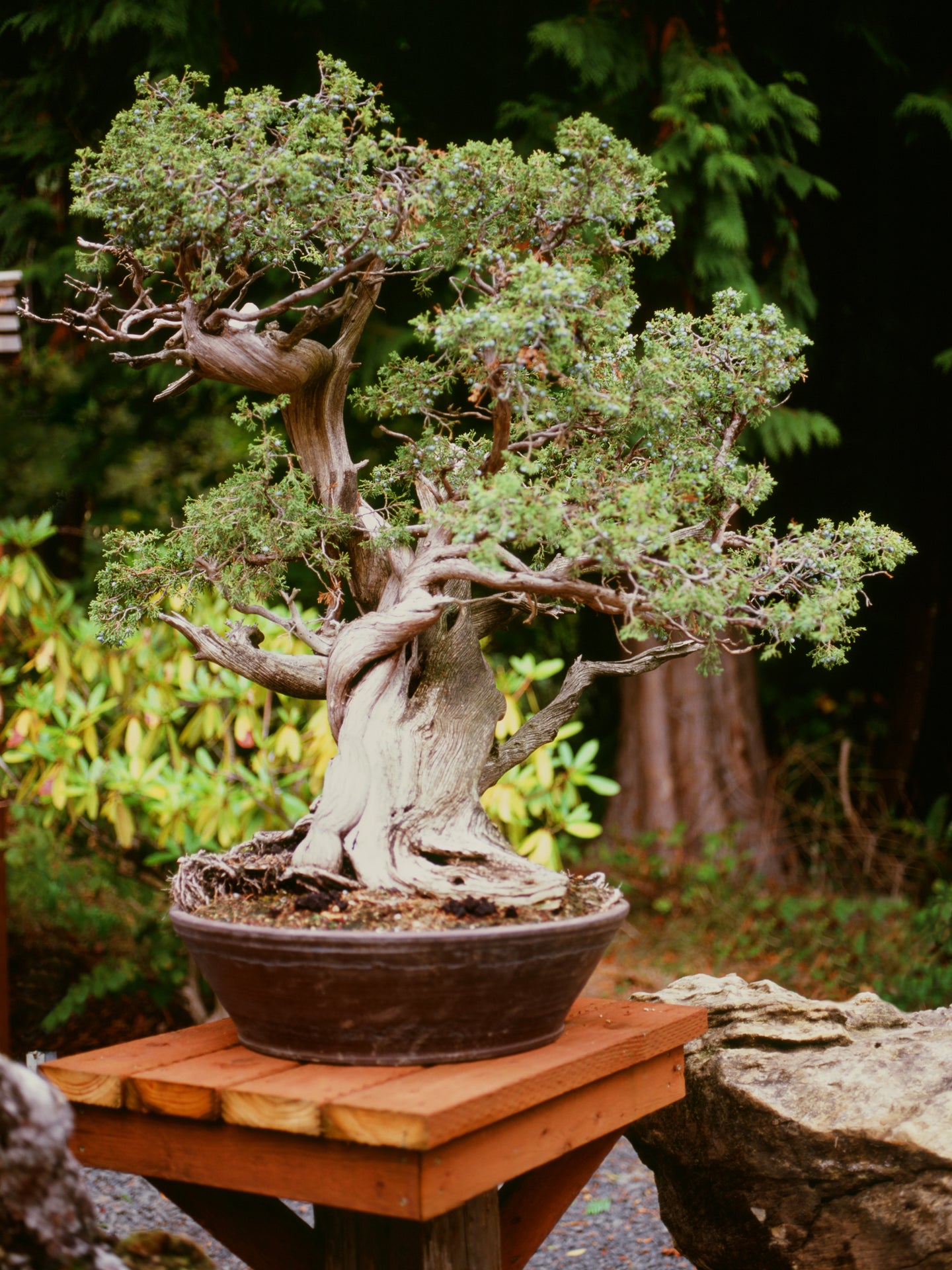 So you’ve got a green thumb (or at least green tinted). Your plant babies are growing vibrantly and joyfully along your windowsills, and perhaps you’ve even mastered the famously fickle fiddle-leaf fig. Can we suggest a unique next step up? Give a bonsai tree a chance. Yes, a bonsai tree. The once-considered laborious mini tree has gotten a bad wrap. “Bonsai has always been this niche, mysterious, misunderstood plant, and never taken seriously,” says Matthew Puntigam, cofounder of Dandy Farmer, a New York-based bonsai farm and shop.

These odd little trees are an ancient art form, and they’re making a comeback in popular plant culture. “Trees touch us in a very deep, almost primal way,” says Puntigam. Whether you grew up climbing them as a kid or like to lackadaisically sit under them at the park today, there is something surreal and magical about growing a tree on your windowsill.

Beyond the beauty, Puntigam argues that the practice of caring for a bonsai is part of the appeal. “It challenges you to be mindful and to be present with nature,” he says. “It’s such a great medium for expression; on a small scale, you can get the same amount of love and energy and well-being as if you were walking through the woods. Maybe it goes back to our roots and ancestors, but it’s really powerful to be taking care of a small tree.”

If you’re thinking you too might want to call a mini tree your plant baby, here is your Bonsai 101 guide to helping it not only grow but thrive.

Great question—no, really, because bonsai are not always what they seem.

When customers stop by Dandy Farmer, they often take a look at the plant offerings and ask: These are beautiful, but do you sell bonsai? Well, the only thing the shop and farm sells is bonsai. This confusion comes from the one or two visual images we have set in our minds, but in actuality, there are a vast array of variations.

Bonsai truly is more about the artistic approach or philosophy and the pruning, but the tree type can vary greatly. “There are some basic rules, but as long as you’re making it look like an expression of nature, that’s bonsai, and you’ve been successful,” says Puntigam. “It’s an ancient technique and art form, but it just so happens that plants are the medium.”

Wait, can any tree be a bonsai?

“Yes and no,” says Puntigam. Sure, many trees can be trained into the bonsai form, but not just any greenery can be considered bonsai. “You don’t want people to stick their Christmas poinsettia in a pot and call it bonsai,” he says. But Dandy Farmer has pruned some really nontraditional options into bonsai before, including rosemary plants.

What classifies a bonsai, then?

It’s pretty simple; there are just a few basic yet vital classifications. First, it absolutely must be in a planter or container (not planted in a garden). So much so, that the name specifies as such. The translation of  the word bonsai says so: Bon means “container” and sai is “sapling or small plant.” “It’s a container plant; that’s literally what bonsai translates to in Japanese,” explains Puntigam.

Second, and lastly, prune, baby, prune. Pruning keeps your bonsai in controlled growth. It’s not as time-consuming as you’d imagine, but it is planned out. It doesn’t have to be every month or even every year; sometimes they’re purposely grown wild before trimming them back. But the entire concept is training your tree to behave miniature. “It needs to be trained, which means pruning both above at the leaves and below ground at the root system,” says Puntigam. And that’s pretty much it.

That seems both easy and difficult, no?

“They’re really not as difficult as people assume,” says Puntigam. Traditionally, it’s usually thought of as a retirement tree, designed for individuals with a lot of time and space on their hands. But that does not have to be the case whatsoever; in fact, that is entirely what sellers, like Dandy Farmer, are trying to modernize.

“It’s really not that difficult; with very little guidance, you can take care of one and keep it alive for many years,” he adds.

Oh, yeah, they can be very old (some hundreds of years). They have a fascinating backstory, too. They’re rightfully associated with Japan, which has been fostering the plant’s culture strongly for the past thousand years. But before that, China developed the concept of bonsai. Chinese artisans made beautiful little landscapes using the small trees, which sprung inspiration for the Japanese. But it’s the Buddhist monks who really took the idea and ran with it. They loved the tree’s ability to bring nature indoors, and especially into their temples, so they could enjoy it year-round. For the monks, “these trees actually had religious, mystical powers in them,” says Puntigam. “They were seen as the life force of earth, in miniature.”

Hey, that sounds lovely. But, hold on, aren’t they really expensive?

Yep, they can be. If you do a quick Google search of bonsai, you’ll see a tree for $12,000 right beside a similar-looking version for $25. Those pricey ones are usually pretty ancient (sometimes 500 years old) and collector’s items (aka not meant for novices or beginners). Most trees you’ll find online and in plant or specialty stores are less than 20 years old (which is still pretty impressive).

What environment do they need?

Remember when we were chatting about how varied bonsai plants can be? Because there are so many different types, many of them require case-specific care. But the majority of bonsai are sold to be indoor trees, so they’re usually tropical bonsai and can handle temperatures of 50 degrees or above. Some outdoor bonsai love extremely cold temperatures, though, like breeds from the Pacific Northwest or Europe, and they need to be in 50-degree settings or below for as long as 16 weeks out of the year.

As far as light is concerned, the mini trees love light—ideally indirect but bright. “A bright room is great, and if it does get some direct sun, that’s even better,” says Puntigam. When it comes to watering, bonsai trees do not like overly dry soil. The frequency of watering can vary based on your plant and your home’s humidity, but Dandy Farmer suggests determining a watering schedule according to the weight of your tree. Feel the weight of the pot in your hands after a good watering; that’s the ideal heft. The plant should never feel too light, as that means the soil inside is very dry.

Also, amazingly, air flow is vital for a bonsai. A breeze will actually stimulate the leaves and branches, encouraging the roots to become stronger, as well as prevent dust buildup. Opening up the window and putting it on the windowsill for a few hours a week is great.

Interest piqued? Here are a few starter bonsais that would love to come home with you.

The One Named Gilly

She has a name, guys, and it’s Gilly. Gilly is a Brazilian rain tree, whose hobbies include the wind blowing in her branches and closing up her leaves at night (or when she’s agitated). Isn’t she the best?

The One Available for Next-Day Prime Shipping on Amazon

Been meaning to pick up a mini palm tree but it keeps slipping your mind? (Who has time for mini palm tree shopping anymore?!) Now’s your chance, with this sago palm bonsai, which has shiny dark leaves and looks like he’d be the center of attention at your next dinner party.

If your mind’s eye has an idea of what a bonsai looks like, it’s probably a juniper. Appease your mind’s eye, then, with this classic cutie, which has a surprisingly great price and will be a blast to prune.

Keep caring for your plant babies: Calling All Green Thumbs: Buy These Under-the-Radar Plants Before They Hit It Big 7 Indoor Garden Ideas That Will Convince You to Become a Plant Person Whoops! This Is the One Mistake You’re Probably Making With Your Plants