A pro takes us inside her just-listed Pasadena home. 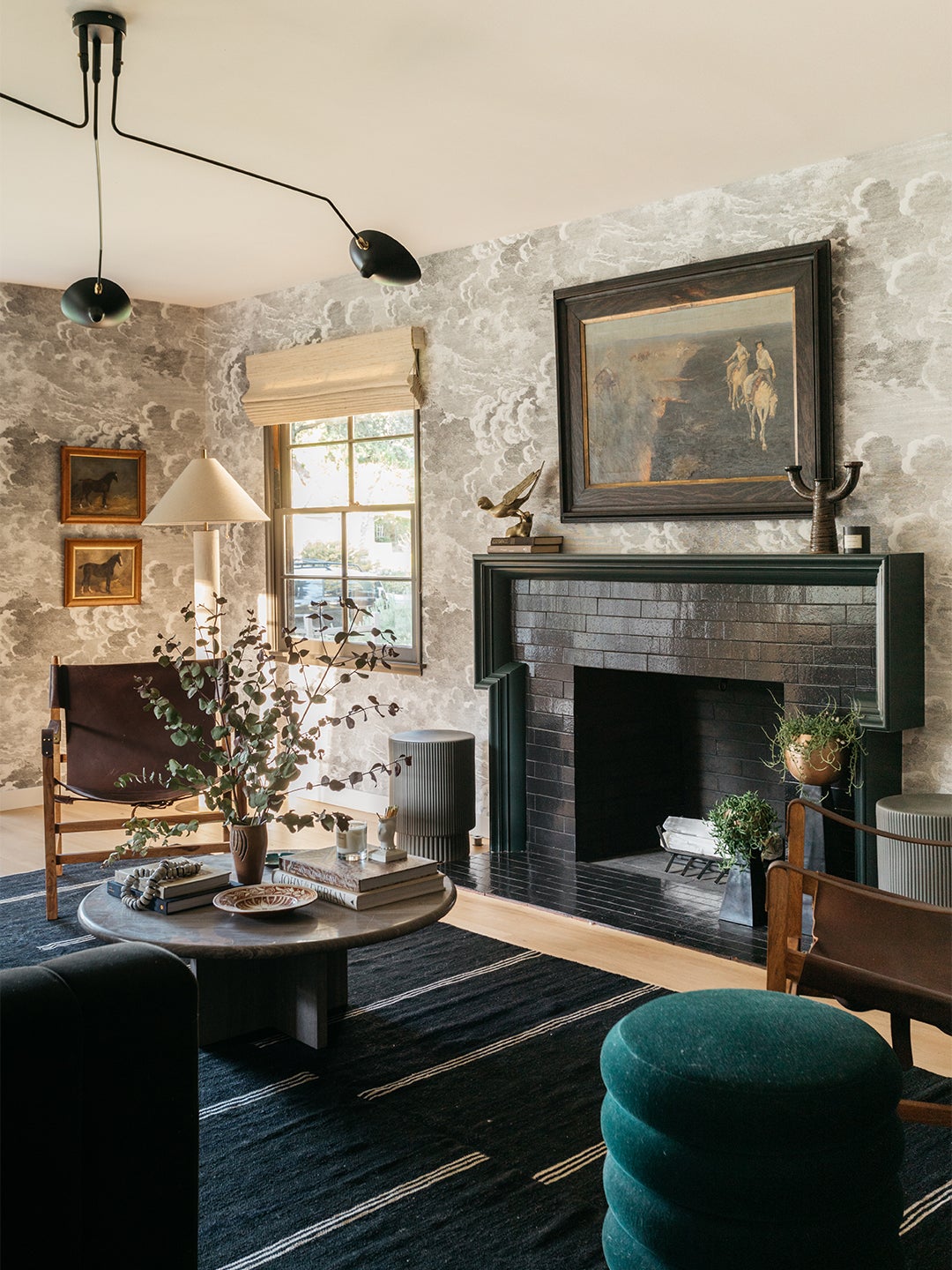 Kirsten Blazek’s ranch-style home in Pasadena, California, used to be the definition of vanilla. But the bland white exterior and granny interior (the space had barely been touched since it was built in the 1950s) worked in her favor when she purchased the place in late 2017. “It was nondescript. Luckily it didn’t really get a lot of attention,” says Blazek, the founder and creative director of design firm A 1000x Better. She started construction the day she and her family moved in, aiming to stick to a tight four-and-a-half-month timeline. Given that a few key changes she wanted to make—such as vaulting the ceilings in the family room, turning the dining room into a bedroom, revamping the landscaping, and transforming the basement into a recording studio—were, she jokes, “actually a little insane,” she pulled it off.

Blazek had no intention of selling the home only a few years later. Then a life change called for a fresh start elsewhere, so the property went back on the market this April—and it isn’t just the modern renovations helping it shine. It’s the staging. According to a report last summer from Realtor.com, on average staged homes sell 88 percent faster and for 20 percent more than ones that haven’t been spruced up. But the extra step isn’t about making your house look like it’s been ripped out of a catalog. Blazek, a seasoned stager at this point, says it’s all about personality. “You’re selling a lifestyle,” she adds. Read on for her tips for catching buyers’ eyes.

If you’re going to invest in any new addition, make it a striped flat-weave or bold Persian runner. Blazek worked with Beverly Hills–based Mehraban Rugs to find ones for all the rooms in her house (she didn’t want to bring in $10,000 worth of rugs when she had two dogs, two cats, and three teenagers running around). “It’s the first thing I start with,” she says. “It determines the color story or if there’s a pattern happening in a room.” The textiles soak up visual space, so you end up needing less furniture than you think to make a room feel full, plus they help even the most neutral furniture, like a leather sectional, to stand out.

Paint the Spaces That Lack Character

Blazek’s own bedroom didn’t have any architectural character, so she decided to give it some definition by covering the walls and ceiling in a peachy terracotta color from Farrow & Ball’s collection with Kelly Wearstler (the hue is dubbed Faded Terracotta). “You want it to be a little more special,” she says. Before it was just a rectangular room. Now the serene space gives off desert vacation vibes.

A fireplace centered on a wall is an easy thing to work around, but one that’s thrown off to the side of an open-concept dining area–slash–kitchen poses a challenge. Blazek’s thinking: Give the original feature (once just plain brick) its own identity by framing it with two matching armchairs and a small rug. “It gives it purpose,” she says.

A room that lacks the big black box instantly looks more polished, but Blazek still likes to indicate to potential buyers where they could mount a TV with a media credenza. “You’re showing them it’s an option,” she suggests. The same goes with maximizing seating with a large sectional: You’re exhibiting how you can fit six to eight people comfortably in one zone.

Kick Everyone Out (for Now)

The secret part of staging that no one tells you about: Move out if you have the means. “I think it’s very difficult to show a house when you’re living there,” says Blazek. Particularly if you have three burgeoning teenagers who are being homeschooled (in other words, there are stray pieces of paper and textbooks around every corner). This also gives you the opportunity to change the kids’ bedrooms into guest rooms, which is ultimately less distracting to buyers who don’t have young ones living at home.

There’s a fine line between a room that feels cluttered and one that looks empty, and Blazek notes that many staging jobs tend to lean toward the latter. To avoid major gaps, the designer peppers in smaller furniture like stools and poufs, as well as side tables. She’s also a huge fan of plants, in particular live ones and hanging options. “They’re softening elements,” she explains. “It’s what makes it seem like somebody actually lives there.” Just don’t forget to pop by in between tours and water them once in a while.

In addition to ensuring her grass was green, Blazek modernized the home’s existing fence by cutting off the curved dog-eared tops and adding a cap around the edge. Then she painted everything the same color as the rest of the exterior: Black Fox by Sherwin-Williams. “It completely transformed it without having to go through the cost of replacing a very large fence,” she says.

Removing the super-personal stuff, like children’s toys, photographs, and old perfume bottles, prevents buyers who are walking in from getting confused. “Because they start looking at all those things and think it doesn’t look like their stuff. How would their items fit with this house?” she explains. “You’re making that emotional bond between the actual house, which is really just a physical structure, and giving it something akin to a soul with which they can identify themselves.”