From must-see art anthologies to must-try cookbooks, give your bookshelf a splash of color for spring. 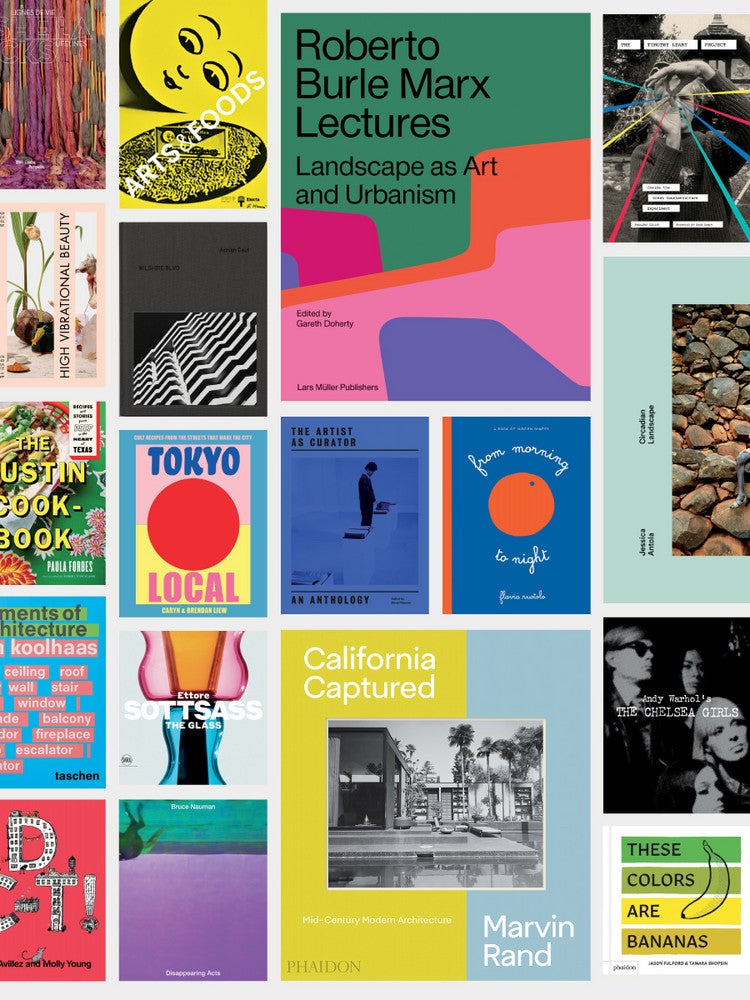 Spring brings about a sense of renewal. So between organizing your shelves and buying the best entertaining finds of the season, consider giving your books a little spring refresh, too—and Domino editors have you covered with their picks for the best, most colorful new titles. From providing design inspiration to getting you more excited about playing with new recipes in the kitchen, these fun new releases all boast vibrant covers that’ll make a huge statement on your coffee table or bookshelf.

Using classic William Steig illustrations to create punny stories about the craziness of New York City, Avillez and Young created a joy-inducing read (reading as a pun on “The City”) that paints a humorous portrait of the place many people love to hate.

Throughout his 50-year career, artist Bruce Nauman has played with a variety of mediums, including fiberglass sculptures, neon, paint, and even architecture. This catalog aims to discuss those choices in detail, and covers everything from the role of color in his work to his play with time and space.

LA-based photographer Marvin Rand has played a huge role in shaping California-inspired mid-century modern architecture as it’s beloved by the world today, and this book explains why. Through Rand’s iconic representations of renowned works—including buildings by the likes of Louis Kahn and Frank Lloyd Wright—the style is worked on again and again to perfection.

Fuel your wanderlust with Jessica Antola’s first monograph—traveling mostly by car through Sub-Saharan Africa, she offers a vibrant glimpse at the scenes of the region, including the lush tropical jungle and patterned patchwork clothing.

Examining the history of the nightclub—which has long been a space for self-expression, vibrancy, and challenging social norms—Night Fever discusses the way these spaces have changed our perception within society.

The Chelsea Girls was one of Warhol’s first successful commercial films, and an iconic document of the 1960s Factory scene in the city. In honor of the 24th anniversary of The Andy Warhol Museum, this book offers an in-depth, deluxe treatment of the film, featuring never-before-seen digitized stills and unpublished archival materials.

Derived from Koolhaas’s highly lauded exhibition at the 2014 Venice Architecture Biennale, this informative read works as a toolkit that explores all the elements of structures around the globe, from windows and facades to stairs and balconies.

Psychologist Timothy Leary was fascinated with the effects of psychedelic drugs on the human mind under controlled conditions, and his studies and papers on the use of LSD and psilocybin (back when they were still legal in the United States) offer a rich look at what lies beyond our consciousness. The first-ever collection of his selected papers is on offer in this novel, and well worth the read.

Hicks has been working at the intersection of crafts, textiles, and architecture for over 50 years—a work of hers might feature a lush silk with porcupine quills, for instance—and has traveled the globe looking for inspiration, including places like Mexico, France, and Morocco. Here, an inside look at her thematic approach.

Curated by famous art critic Germano Celant, Art & Foods explores the intimate relationship between the two subjects. A team of contributors worked to describe the various aspects of the rituals of food from all around the world in new and interesting ways, along with corresponding images that really make you think of your own relationship with the foods you eat yourself.

Roberto Burle Marx’s studies in landscape have been widely written about—but his own words have hardly ever been published. This book aims to change that by documenting several of the landscape architect’s lectures, some of which have never been translated into English.

The founders of Domino favorite clean beauty website CAP Beauty finally share their secrets to create true radiance, from the foods we eat to the workouts we do. As it’s not only how we treat ourselves, but how we think that truly affects how good we feel, this book provides everything from 100 plant-based recipes to mantras, meditations, and, of course, some radical skincare regimes from the experts themselves.

Spanning east to west from downtown to the ocean, Wilshire Boulevard is the main connective highway of Los Angeles. New York-based photographer Adrian Gaut, fascinated by this famous strip of LA history, has created a picturesque look at the buildings that make it up through the unique framing of its architectural details.

One of the hottest travel destinations (and for good reason), Austin’s food scene is equal parts Texan barbecue and new-era food trucks. This cookbook explores both those dichotomies, taking influences from all across the globe to provide the reader with recipes that are uniquely Austin.

Tokyo Local: Cult Recipes from the Streets That Make the City by Caryn Liew and Brendan Liew, Rizzoli, $35

Often cited as a food lover’s paradise, Tokyo boasts everything from slurpy ramen bowls to spicy, warming curries, and this book allows you to become a professional chef at home. Separated into sections “Early,” “Mid,” and “Late,” the cookbook aims to make sense of a city through its food.

The Artist as Curator: An Anthology by Elena Filipovic, Artbook, $30

By calling on examples from famed artists and their views on exhibiting their work—including the likes of Miriam Schapiro and Andy Warhol—this series of essays studies artist-curated exhibitions and their effects on both pre- and post-war society.

This adorable title reminds us that things are never as they seem upon first glance. By asking children to look at familiar shapes and notice how they change, a mushroom suddenly becomes a cereal bowl, which later becomes a traffic cone… A clever read that reminds both parents and their kids to never judge a book by its cover, From Morning to Night deserves a spot on your nightstand.

These Colors Are Bananas by Tamara Shopsin and Jason Fulford, Phaidon, $17

Published in association with the Whitney Museum of American Art, this book challenges readers to really explore the colors they see in everyday objects, from bananas—which, according to the book, can range over 25 colors—to grass, which actually has shades of pink. You’ll never look at color the same way again.

The Glass by Ettore Sottsass, Artbook, $70

Famed Italian architect and designer Ettore Sottsass designed glassware extensively toward the end of his career, even establishing a working relationship with the glassmakers on the Venetian island of Murano to produce intricate, fairly ambiguous sculptures that truly can be whatever you want them to be. This catalog, published on the 100th anniversary of his birth, is the first thorough study on Sottass’s unique play on craftsmanship.

This story originally appeared in the spring 2018 issue with the headline “Reading Rainbow.”

The Wellness Books Domino Editors Can’t Get Enough Of Art and Design Books No Coffee Table Should Be Without Alternative Beach Reads: The Best New Design Books