Put your feet up, and get lost in one of these stylish volumes. 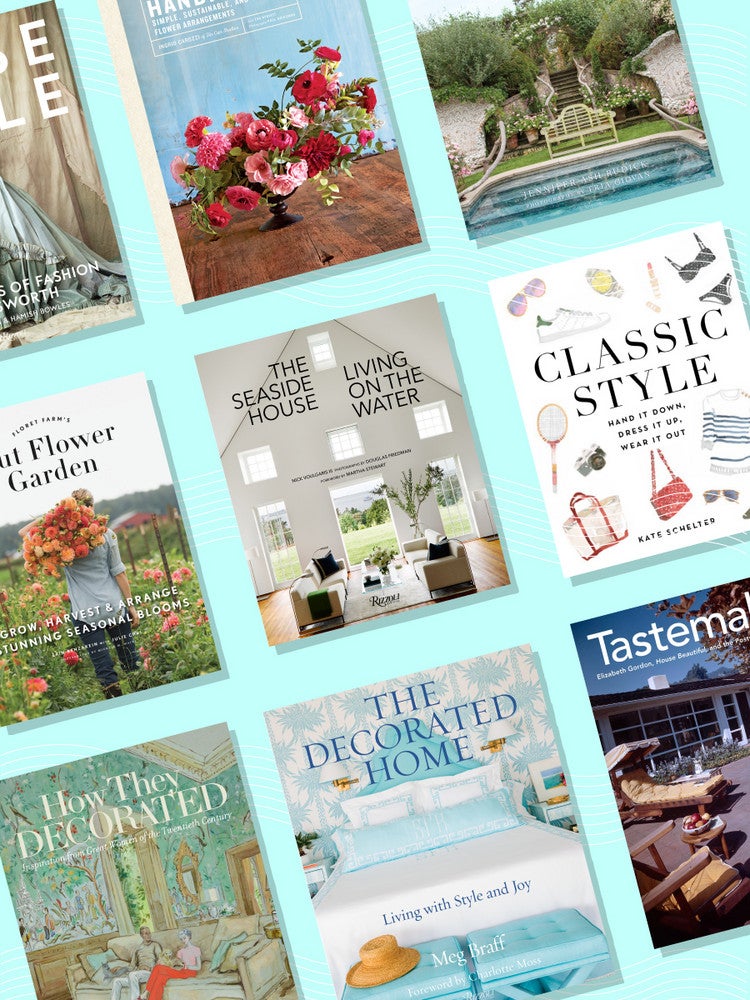 When you tire of the paperback you’ve been pouring over poolside, pick up one of these glorious new design books. These page-turners will captivate with rich photography and vibrant illustrations. And they’ll inspire you to dream of a seaside abode, offer insights on various design movements, and provide tips to give your home a casually elegant aesthetic. Still others touch on flower arranging, gardening, and iconic style—basically, your summer in a book.

paired with her insights on clothes, objects, and other essentials that she deems “the classics”—pieces that exude iconic American style. Along with nostalgic references from Schelter’s own life, plenty of hilarious passages, and details on how she created her personal style, the book serves as a handbook of sorts to help readers develop and curate their own individual sense of style.

Classic Style: Hand in Down, Dress it Up, Wear it Out by Kate Schelter

Flower farmer Erin Benzakein cultivates hundreds of flower varieties at her Mount Vernon, Washington farm. Here, she shares her wisdom on planting a cutting garden wherever you live. More than 175 flower varieties are chronicled in the book and along with details on each one, Benzakein tells readers what tools and tricks to use during cultivation. Check out the section devoted to daffodils (Benzakein grows 22 varieties on her farm) and the part in which she offers tips about lilacs (you should pick in the early morning or evening). Benzakein is known for her unconventional bouquets, and it’s a delight to see photographs of the varieties she pairs together in her gorgeous arrangements.

Meg Braff is known for her easygoing take on classic decorating. This book showcases countless homes designed by Braff with her casual take on chic. Cheerful and vibrant are a driving force in all the striking rooms she creates. She tends to go bolder with color, an element she considers a powerful tool for its ability to evoke feelings and memories. Braff also plays plenty with pattern. “Like color, a room can typically withstand a little more pattern than one might think,” writes Braff. “Pattern, she says can transport you to someplace warm and wonderful or sophisticated and Zen.” Readers, prepare to finish the book armed with inspiration to transform your own home.

The Decorated Home: Living with Style and Joy by Meg Braff

The enduring appeal—the miles of beaches, the farmland, and that luminous light—of Long Island’s North Fork is beautifully captured in this weighty tome. With over 300 photographs by Tria Giovan, the range of homes depicted includes an abundance of weathered shingled cottages along with spacious modern houses; historic residences filled with antique treasures; and Mid-Century Modern masterpieces. The gardens depicted are enchanting, lush, and verdant—bursting with summer’s bounty.

advertisement
Out East: Houses and Gardens of the Hamptons by Jennifer Ash Rudick

Top Brooklyn-based florist Nyqvist presents a variety of options for the at-home florist. The arrangements are gorgeous and unexpected, yet all the blooms featured (and photographed by Paul Brissman) are available from supermarkets and other resources easily accessible to the average person. Nyqvist shares her knowledge and tricks with simple step-by-step instructions on how measure, cut, and arrange each flower. She also offers ideas on containers—upcycled wine bottles, wood crates, rusty urns—and how to make weeds work in an arrangement. Photos of Nygvist’s rustic workspace are a bonus.

This book is filled with an abundance of coastal homes ranging in various sizes, shapes, and designs, each one remarkably different from the last. Houses are situated in enviable locations including Nantucket, Harbour Island, Malibu, Fire Island, Provincetown, and Miami. Several are inhabited by noted figures: There’s Giorgio Armani’s Antigua villa and Celerie Kemble’s triple-gabled, Victorian, Palm Beach-inspired abode in the Dominican Republic. The Seal Harbor, Maine retreat of Martha Stewart, who wrote the book’s foreword, is another highlight.

The Seaside House: Living on the Water by Nick Voulgaris III

Here, readers are offered a glimpse inside the residences of 16 20th century tastemakers. Each of the women profiled forged their own aesthetic, and the book has broken the subjects down into four categories: “The Fashionably Chic” where Babe Paley and Elsa Schiaparelli are featured; “Legacy Style,” which highlights the home of Lady Diana Cooper; several homes of Pauline de Rothschild are included in “In the Grand Manner;” and the residences of Bunny Mellon and Georgia O’Keefe are among those featured in “Unconventional Eye.” Woven between the captivating photos of their legendary interiors are biographical bits on each woman.

How They Decorated: Inspiration from Great Women of the Twentieth Century by P. Gay Tapp

From 1941 to 1964, the legendary House Beautiful editor Elizabeth Gordon promoted her vision of “good design” to the magazine’s middle-class American readership. She was devoted to what she called the American Style and became close allies with Frank Lloyd Wright. With more than 200 images from the influential editor’s tenure, the book highlights the editorial programs initiated by Gordon that reshaped ideas about American living, and by extension, what designers made, and what manufacturers brought to the market.

Chatsworth, a original Elizabethan house built on the site purchased by Sir William Cavendish in 1549 is renowned for both its fashionable history—think splendid balls where guests have donned majestic tiaras and dresses for five centuries—as for its architecture, art collection, and palatial gardens. The book highlights the magnificent estate in all its glory with countless photos and features “aristocratic fashion” with ensembles that date back to the Victorian-era’s Jean-Philippe Worth to Alexander McQueen. Fashion ranges from historic examples of ceremonial, military, and fancy dress, as well as clothing worn by the Cavendish family to ride, hunt, shoot, and fish. Essays from leading historians and fashion critics are scattered throughout the book.

Editors’ Picks: The Books You Should Pack For Your Honeymoon A Book of Ikea Hacks Is Real, and It’s Coming Soon The Best Beach Reads of Summer 2017