A Mystical Redwood Hideaway That Delights at Every Turn

Topped with beehives and filled with storied objects. 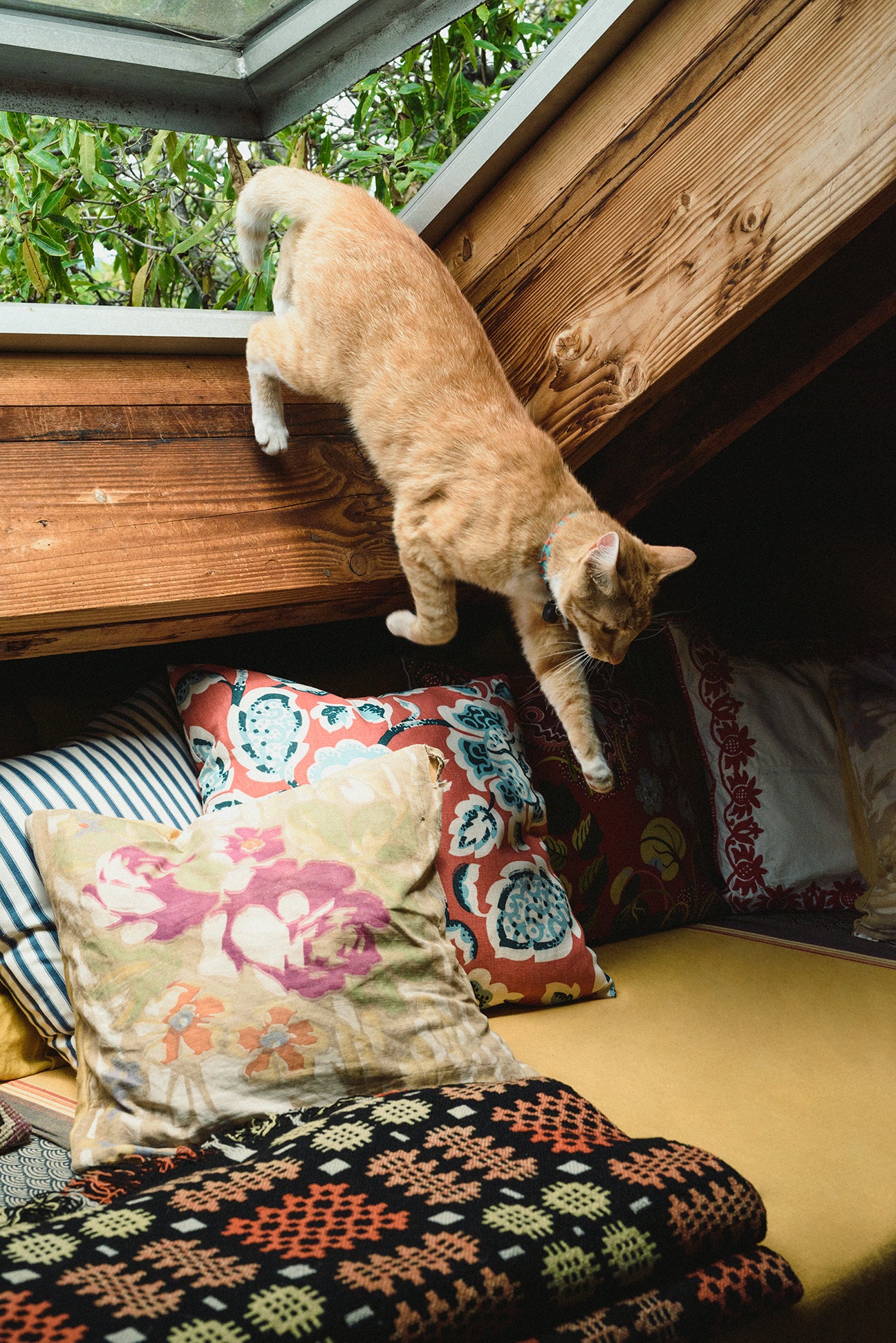 This story originally appeared in the Fall 2019 issue of Domino, titled “The Natural Nomad.” Subscribe to be the first to receive each issue.

When Alex Tieghi-Walker tells a story in his warm British baritone, he will almost certainly touch on three essential ingredients of life: travel, community, and food. The Berkeley, California–based writer and creative director’s multicultural, roving upbringing sparked in him a nomadic spirit, and yet he easily crafts a home wherever he lands. (Fittingly, he has worked with hospitality brands such as the Ace Hotel and Soho House Group.) No matter his next destination, he always has his table set for guests. “Almost every Sunday I have 15 people over for a five-hour lunch, from late afternoon into evening, which I love,” says the consummate host.

Tieghi-Walker moved from his native London in 2016 and was enchanted by Northern California’s mellow climate and robust food culture. Following stints living in San Francisco and on a boat in Sausalito, and then at Scribe Winery in Sonoma, where he established the creative residency program, he was on the hunt for a longer-term place to settle that was connected to nature. When a Bay Area Craigslist search led him to a ramshackle barn covered in wisteria and surrounded by gardens, it seemed like fate.

The building’s facade, with its charming front door and dormer window, did not prepare him for the “ancient” magic inside. Originally built as a temporary lodging after the devastating 1906 San Francisco earthquake, the 1,400-square-foot structure served as a carriage house, a garage, and, in recent decades, a very rustic living space (the previous tenant was a wilderness camper who slept in a hammock). Drawn to its raw potential, Tieghi-Walker has spent the past two years dividing the interior into rooms and sanding and replacing the flooring—all with a mind to preserving the history of the place while making it comfortable and inviting.

Much of the small home’s mystical energy can be attributed to the fact that it was constructed from first-growth redwood, a now-obsolete (and illegal) building material that Tieghi-Walker describes as absorbing sound, smell, and light, its rich aubergine presence “living” with the changing seasons (doors will sometimes decide not to close for a month or two). The front end of the house, a double-height common area consisting of a sitting room and kitchen-dining space, features an 18th-century Irish dining table large enough for 20-person gatherings, while the back end is split into a bedroom on the bottom floor and a reading-writing loft (and frequent guest bedroom) on the top. This upper nest perfectly aligns with the cardinal points; the sun rises through the back window and sets directly in the center of the glass doorway that leads to the roof. Come sundown, milk-glass pendant lights give “the gentle, focused glow of a Japanese workshop,” says Tieghi-Walker.

Set against this storied backdrop are series of magpie collections that layer his space in delightfully odd vignettes, like a hanging vintage gong found in Kyoto framed by ceramic vegetables spotted in Naples and crowned with bunches of dried sage picked from the garden. “If I see something pretty when I’m traveling, I’ll do anything to bring it back,” he says. This instinct to fill his “curio closet home” with global gems sourced from thrift stores, junk shops, and flea markets is not so much an individual quirk as it is a family legacy. His grandparents’ house was brimming with furniture and art hailing from locales stretching from The Gambia to India, each piece accompanied by a story of a place that, he says, “didn’t quite seem real yet” to a young child.

Those tales carry on in the quilts hanging in the sitting room and bedroom, handmade by Tieghi-Walker’s grandmother. Complex expanses of geometric color, they are crafted from the local fabrics of the countries where she lived—tropical florals from years spent in the Seychelles in the sitting room; classic English patterns from Liberty London above his bed. Tieghi-Walker has carried this art forward through his own growing archive of textiles, which includes 19th-century Navajo wall hangings, Bolivian wovens, and Japanese indigo cloths. Anything that hasn’t already been turned into pillows, curtains, or table runners will one day become a new generation of quilts (as soon as he masters his grandmother’s pieced-hexagon technique).

For Tieghi-Walker, home is not limited to the confines of the redwood walls but extends to the gardens outside that overflow with an almost entirely edible bounty, ranging from vegetables (carrots, onions, lettuce), fruits (lemons, rhubarb, figs), and herbs (basil, oregano, chamomile) to edible flowers and native wild plants, like dill and California poppies. Grapevines climb the sides of the building and up to the roof, where a dozen beehives are cared for by a local beekeeper in exchange for “hive rent” paid in honey. (“The honey really does taste like the garden!” says Tieghi-Walker of the citrus, lavender, and sage notes that infuse the hyper-local creation.)

Having dedicated so much care merging his inextricable love of art, food, and fellowship within his own home, Tieghi-Walker is making his first foray into bringing his unique brand of multisensory storytelling to a wider audience this fall, with a pop-up experience devised in collaboration with Emma Lipp, director of food at Scribe Winery. The temporary shop, dubbed Still Life, will take over Lipp’s whitewashed Sonoma barn and feature objects Tieghi-Walker sourced on a recent trip to Japan. The space will host events, such as meals with sake pairings (where guests use ceramics they can later bring home) and a workshop in which to make papier-mâché Buddha hands.

The series will continue based on where Tieghi-Walker travels next, with the goal being to continuously celebrate different cultures through food and craft. Although he one day intends to return to friends and family in Europe, he admits this small yet extraordinary dwelling has stoked a longer-than-expected romance with the Bay Area. “There are few places on earth that stimulate and energize in the same way,” he says. “The California dream is real.”

More From Our Fall Issue: We Want to Live in This Textile Designer’s Feng Shui Sanctuary The Historic Resort Giving Us Major Gucci Vibes 10 Things That Make Kelly Wearstler Happy