Every Detail in This NYC Rental Is Tailor-Made, From the “Flatware Trough” to the Beaded Dog Bowls

The headboard even curves around an awkwardly placed pipe. 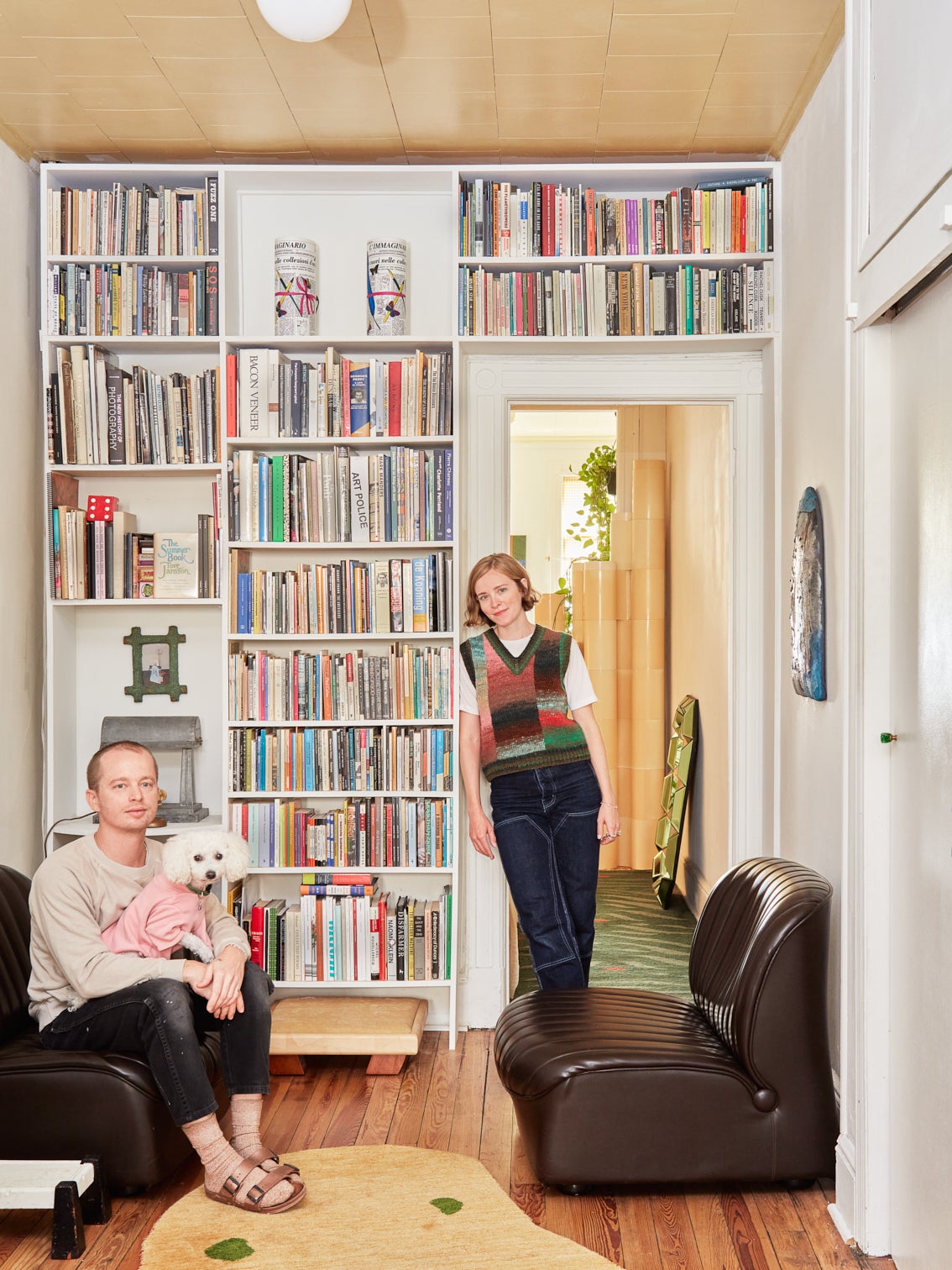 After several years of accepting the inevitable design restraints of life with roommates, Queens, New York–based furniture and jewelry designer Sarah Burns was longing for a blank slate to make her own. So when she got a tip on a not-yet-listed unit in Ridgewood, she was willing to snatch up the “filthy” railroad apartment under one condition: “The place was an absolute dump,” she shares. “But I knew that if I could peel back the vinyl and find solid wood, I’d have a good place to start.” Although her rent would double living there, it was still the most affordable thing she could find. And sure enough, under a layer of shabby brown flooring, she found the potential she was looking for.

Thrilled as Burns was with her discovery, she also found the surface underneath had been painted burgundy (not to mention covered in glue residue), plus the kitchen cabinet situation was nothing less than claustrophobic and there were smoke stains yellowing the walls. “It needed a lot of TLC, but I wanted a challenge,” she says. Now the only yellow in sight is on the cheerful curtains covering the front door and cupboards framing the fridge.

With days defined by hands-on work and a talent for woodworking from growing up building ice shanties with her dad, Burns was armed to take on most of the major updates herself. She did, however, call in backup for the floors. Getting them sanded to reveal the pine’s natural grain by a pro was her biggest splurge. “I probably paid the equivalent of one month’s rent on that,” she admits. The landlord was pretty hands off, even when changes were necessary, so it was up to Burns to make the space work for her: “Once the floor was done, the stage was set.”

Patience was key for her next act. Luckily, her master’s degree in interior design from the New School primed her for a more steady pace. “My thesis was an argument for a slower interiors practice,” she recalls. Rather than decorating everything at once, her intention was to live with things and play with the placement of one or two pieces at a time. “My bed was on the floor for a year and a half! It wasn’t that I was noncommittal; I just needed time to figure out what I wanted.” Unlike most railroad layouts, where people might put the sleeping quarters at the far end, she let her office take that spot. To this day, she continues to change and rearrange the space; it’s never really “done.”

After eight months of living solo, however, Burns’s boyfriend, writer and photographer Adam Caillier, joined her, and there was suddenly a new set of needs to be met. Mainly, “much more food,” she says with a laugh—and that meant much more storage. The couple crafted two freestanding units out of maple and pine in the kitchen to house dry goods, pots, and pans. They plan to take them with them on their next move. Underneath the open shelving over the sink, Burns built a separate, deeper ledge for cutlery. “That’s a collaboration between Adam and me,” she explains. “We’re calling it a flatware trough.” Not only does the addition free up precious drawer space, it allows Caillier to show off the Kongo silverware pieces by Jens Quistgaard that he’s collected over the years.

Almost everything in the apartment has been tailored specifically to complement the couple’s hobbies and tastes. “Adam is a critical part of my process, in life and in this space,” Burns says. “If he had zero interest in aesthetics, I don’t know if I would have done as much here.”

Bookshelves extend to the ceiling to accommodate the couple’s combined library, plus a metal lamp, which has pride of place on its own half-moon shelf. In the bedroom, the custom headboard, built to the exact width of the space between the doorway and the wall, was made from pieces of an old platform bed to craftily curve around a pipe that was radiating “tropical heat.” “I think the most unique aspect of how we live is that we repurpose materials and rebuild our world based on what we need,” Burns shares. “I can’t imagine not being able to build things.”

Even something as small as a knob takes on new meaning. A collection of vintage green glass ones from a flea market dot a closet panel after not having a home for years. “One day I followed a whim and sort of bedazzled the door,” she shares. “You could grab the door nearly anywhere and slide it open.” One of her favorite details is the blackened steel protrusions that frame the top of her closet. She designed the storage with the idea that she could leave the plywood box behind and bring the rails with her to a future location. It’s a new concept she’s been exploring, and she imagines a space where an entire wall could be punctuated with those metal pieces, making it possible to easily transition a room season to season simply by switching out fabric panels.

Even Frank, Burns’s bichon frise–poodle mix, has a bespoke moment in the apartment: His food and water bowls are built into the wall so that they float off the ground. “It’s better for his digestion,” the designer says. “And I just love him so much I decided to bead them.” Milk-painted wood balls hang from twine around enameled bowls. They were such a hit, the detail also makes an appearance on sconce covers in Old Jewelry Store, her newly opened shop in Chinatown.

As Burns prepares for her first solo show of furniture and household objects at Marta gallery in Los Angeles next spring, she reflects back on how her apartment has been part of her growth as an artist. “It’s been this experimental space,” she notes. “I’m figuring out how to translate my creations into a body of freestanding work.” The old railroad layout has, in fact, taken her full circle.