A conversation with Bec Brittain. 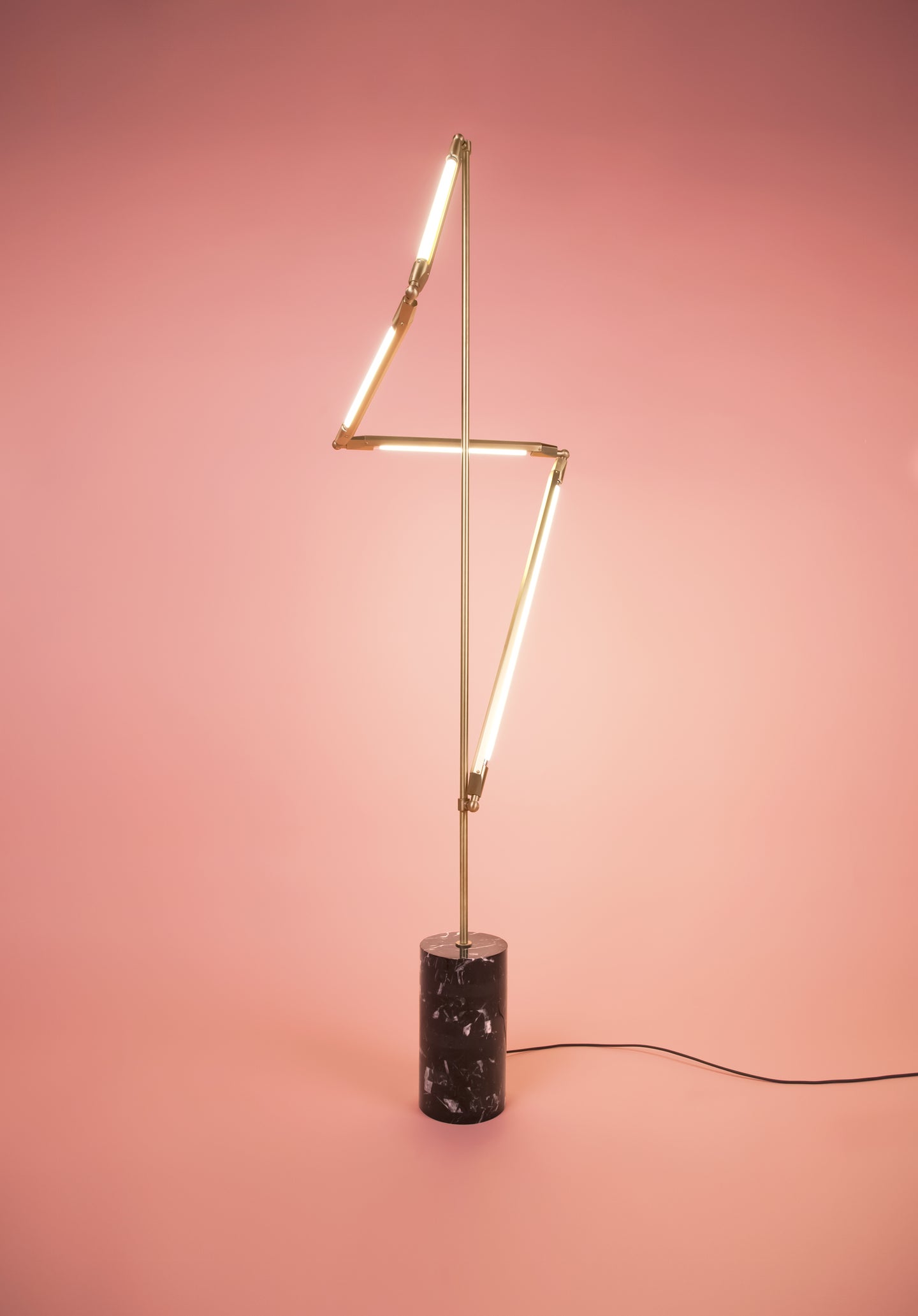 Bec Brittain can trace her design ethos back to her grandmother’s house. “She bought what she liked and mixed it all together in a beautiful way; pairing her Bertoia Diamond chairs with a really beautiful oriental rug, for instance,” says Brittain. “I grew up with this idea that good things persist. Good work will always be good work.”

Anyone who’s familiar with the lighting maven’s covetable and conceptual installations will recognize this search for timeless appeal. Those less familiar, however, can find it at Canadian label WANT Les Essentiels’ West Village boutique, where a number of Brittain’s creations are on display as a part of an ongoing artist showcase.

“There is something engaging about simplicity in complex structures,” says Christine Charlebois, creative director for WANT. “The installation shows how Bec has a way of layering elements of light, reflection, and materials to appear minimal but with distinct perspectives and meanings.”

A riff on her breakout Shy light, her Flags fixture is composed of sheets of colored glass that appear to shoot out of the ground and stop at a single beam. You want to compare it to an object you’ve seen before—maybe a mirror or a floor lamp—but you can’t.

“When I was sketching, it almost became comical in its oversize-ness,” says Brittain. “I didn’t even realize how much the glass itself was becoming structural, which I guess is the beauty of sketching and not thinking too hard. A lot of times I’m setting up what my best guess is. You can’t be 100 percent sure until you turn it on.”

Ahead, Brittain shines a light on taking career risks, powering creativity, and the never-ending search for play.

On taking the winding road to lighting…

Brittain started her journey as a maker at Parsons School of Design in New York, where she originally set out to study fashion. “I was 18 when I realized that trend-based work just didn’t suit me,” she recalls. “If I was going to be in fashion, I wanted the dress that I made in 1998 to still be relevant and beautiful in 2008. For the most part, that’s not how fashion works.”

From there, Brittain moved into product design but quickly switched gears to pursue a degree in philosophy before moving to London for architecture school. Though she may have not known it then, she was slowly accumulating each piece to her puzzle.

“I was working in high-end hardware for a little bit, and that taught me metal, which really suited me,” she says. “Working at an object scale as opposed to an architectural scale just resonated.”

It wasn’t until Brittain found herself working for Manhattan-based lighting designer Lindsey Adelman that her path was crystallized. In 2011, she established her own firm, first working out of a spare room in her Brooklyn apartment before moving to a studio.

“When I couldn’t see two steps in front of me, I asked my friend, [furniture designer] Paul Loebach, ‘How did you do it?’ And he said, ‘Embrace the fear.’ It’s never going to not be terrifying. It’s always terrifying. As long as I sold one light a month, I could survive. It grew slowly from there,” says Brittain.

Today, her work can be spotted all over the globe, with a client roster spanning Harvest Ventures, Selfridges, and Uber.

Having long been committed to the pursuit of longevity, the disposable nature of traditional product design didn’t sit well with Brittain. Suffice it to say, widgets weren’t cutting it anymore.

“To make things truly as well as they can be made and also have them be made to order solved some quandaries I was having with general product design, which was feeling really wasteful to me,” she says.

Custom, luxury lighting proved to be an apt outlet. Brittain and her team of six employees assemble every piece by hand as they work through the technical, electrical, and engineering challenges that each new creation poses.

“It gets to be playful and sculptural while still being functional,” adds Brittain. “It’s not like a chair, which very much has to interact with the human body. Lighting (as long as it lights up) is pretty much a blank canvas.”

On embracing (and defying) trends…

Some of Brittain’s more daring structures, like Mercury, a monumental fixture held together by 35 strands of suede affixed to LED tubes and obsidian, Jasper, and agate beads, appear to be in direct defiance of conventional interior lighting. Though, breaking with tradition was never a conscious decision.

“I’m very well [aware] that my lighting, formally, can be a bit challenging to the eye,” says the designer. “Maybe in a quieter room, it’s not what suits. I think there’s room for the gamut. A normal globe pendant is sometimes the thing you need in a room. I can’t make anything other than mine.”

Often incorporating unexpected materials like marble and leather into her fixtures, Brittain’s textural juxtaposition is as crucial as her constellation-like configurations. “I don’t see how you can go wrong with marble, leather, obsidian, or brass. I pick the things I want to be around. The engineering of these pieces is problem-solving. The material choices are where I get to play,” she says.

Brittain’s search for elevated materials—and the beauty that opposing materials bring—can be applied to every space in the home.

With new takes on marble and fiber art already in the works, this year is shaping up to be Brittain’s most playful year yet. “It’s been exciting to do things outside of my comfort zone,” she says, hinting to an exciting launch set to debut at Salone this year.

10 Design Experts on What Modern Design Means to Them