A sunken hot tub is the prime spot for happy hour. 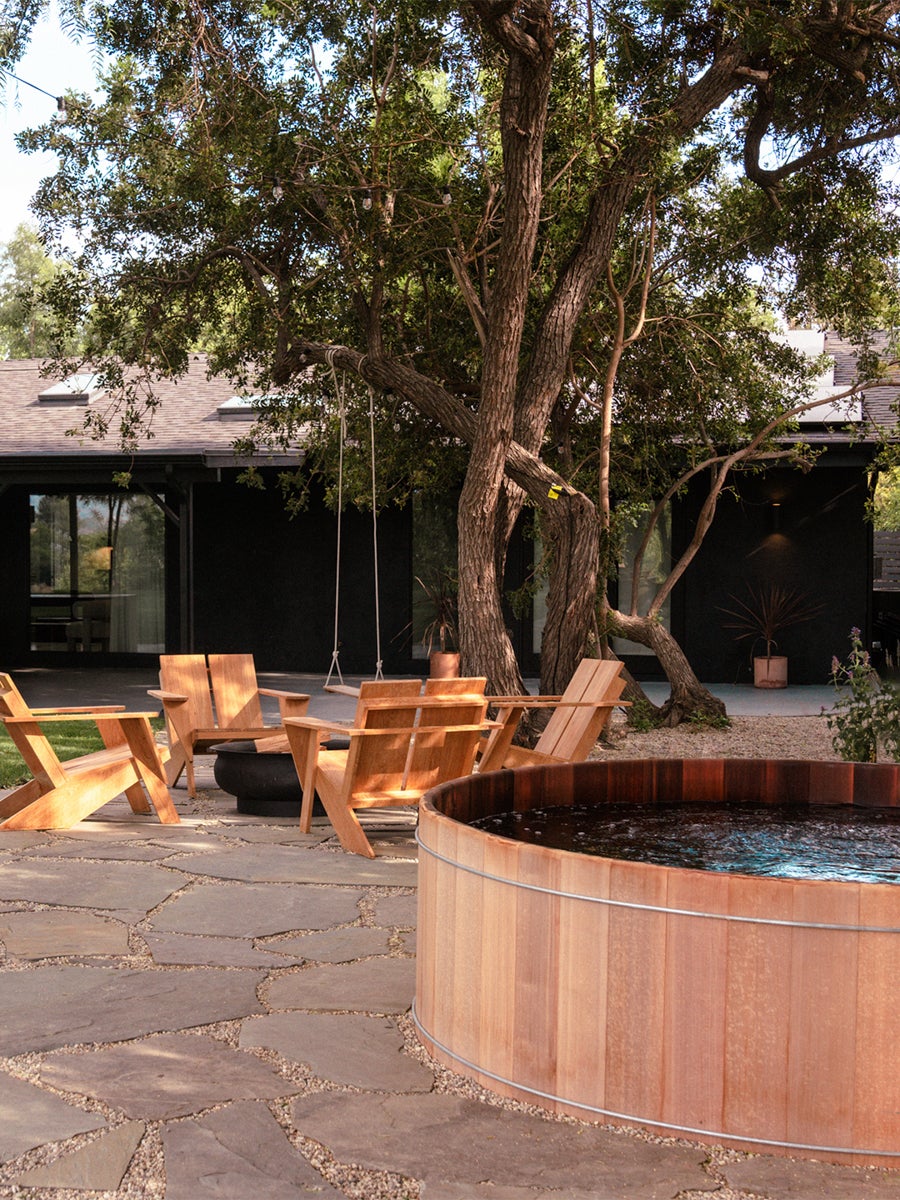 No matter how zen the interior of Whitney Brown and Carlos Naude’s 1960s home was post-renovation, outdoors, the founders of Working Holiday Studio wanted space for fun. “I’m obsessed with this idea of packing in as many activities as possible,” says Naude. A hot tub here, a treehouse there—his dream backyard consisted of far more than fresh sod and a dining table fit for 12. The jet-black facade was a no-brainer (Naude and Brown picked out one color swatch and stuck with it), but the rest of the expansive hillside was a puzzle. “How could we give ourselves an oasis, while not tearing up every inch of the original yard?” he says he asked himself. Ahead, find out exactly how their space came to be—crane mishap included.

When in Doubt, Build It Out

Rather than invest more than $200,000 in an in-ground swimming pool, something that was majorly out of the couple’s budget, Naude went for the next best thing: an 8-foot-wide hot tub clad in cedar that could arrive preassembled. But come installation day, the delivery vehicle began to literally sink into the front yard. Then the tub could barely fit through the side yard.

“We may have a cracked driveway now,” says Naude, laughing, “but we also have a sunken hot tub.” All things considered, he assures that the ability to hop between the soaking tub and nearby firepit (So. Many. S’mores) was well worth the hassle.

Naude had pined for a treehouse as a child, and his vision was impressively specific: mismatched wood planks, an abundance of nails sticking out everywhere, and a rickety ladder, just as any good pirate would like it. However, “I grew up in Mexico with almost no outdoor space,” he says. Thirty years later, he finally had the chance to make his dream a reality—but this time for his 3-year-old.

The “treehouse” frame, made of wood painted the same color as the house, is not only kid-safe—there’s no chance of little ones getting through the gaps of the railings—but a prime spot for Naude to have a cocktail overlooking the hills after a long day of work. The net swing is the cherry on top. “The tree sold me on the property,” he admits. “I knew what to build immediately.”

While English-style wildflower gardens may be trending, Naude prefers a streamlined look. “We cleaned up and tore out everything that wasn’t the trees,” he says. Minimal upkeep aside, Naude wanted the rolling view to speak for itself—something busy bushes and flowers would have distracted from. He often sits on the hot tub’s built-in bench and watches his son, Rico, run free. “The most exciting part is the memories that haven’t even been made yet,” he says. “There’s so much potential.”