The first step? Open up the Craftsman’s layout. 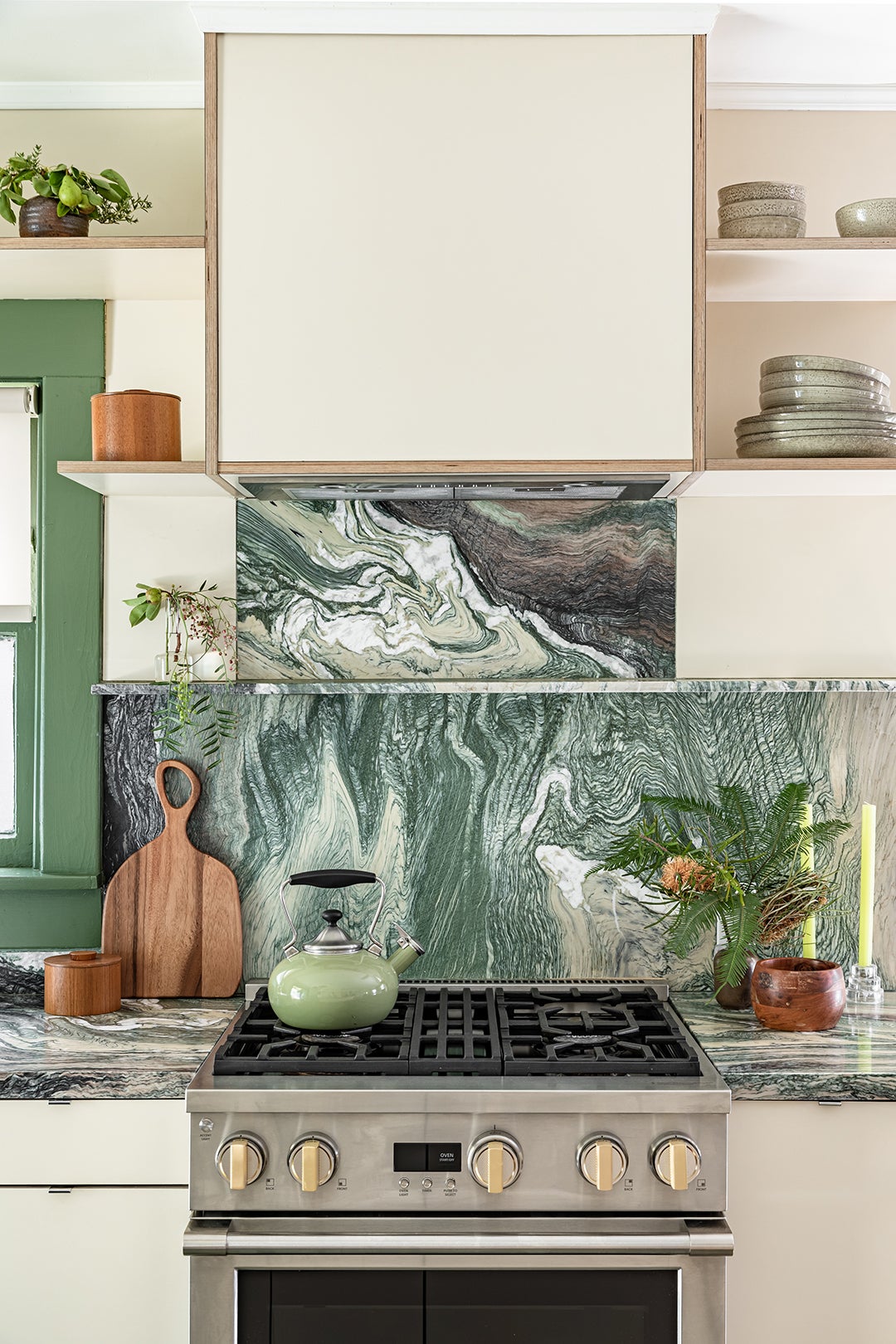 For entrepreneur Eric Bach, it was always about that kitchen marble. Even before he had ever met designer Leah Ring of Another Human, he followed her on Instagram, where she posted a swirly emerald and celery slab. He DMed her immediately, sharing his obsession. “I have a bit of a psychedelic taste in things,” Bach says. “And it just blew my mind. It feels like you’re tripping when you look at it.”

But timing is everything, as they say, and when he hired Ring to gut reno his new Craftsman home in Echo Park, a suburb of Los Angeles, that particular piece of whirly goodness had already been scooped up by someone else. “I started reaching out to literally every stone yard,” Ring recalls. “A lot had green, but this was very specific.” Luckily, they eventually found two slabs of it, and the project could commence.

Before marble could be laid, however, the space needed a full renovation to open up the layout—Bach, the owner of Good Boy Wine and West & Wild, dreamed of hosting friends in the living room while he cooked in the kitchen. But the main living space was subdivided with columns, and the kitchen was closed off, so Ring went to work on creating a blueprint that would fit his casual hosting style—aka forgoing a formal dining room because, hey, this is L.A., and everyone can eat at the kitchen island or outside.

Another key to hosting? An L-shaped sofa that could fit all of his friends (and his pup) and dominate the living room. Adamant to defy the ever-popular SoCal earth-toned palette, he went in the other direction, toward the sky. “I wanted something that reminded me of sitting on a cloud,” says Bach. You can almost feel the Simpsons-like nimbi descending.

Next to the sofa, a sitting area houses what Ring calls neon “wackadoo chairs,” which reflect off the baby blue and nod to Bach’s art collection, a vivid array of modern pieces that blend in perfectly with his Frame TV in the living room.

An avid collector, Bach let his gallery inform much of the home’s design, like in the primary bathroom, where a photograph of a woman swimming underwater (taken by a friend who lives in Majorca, Spain) inspired the mix of blue tiles that coat the shower walls and floor. “I showed my friends and family the mock-ups, and they said, ‘You’re gonna get sick of it’ and ‘It looks like a high school bathroom,’” Bach recalls. “And now that it’s done, they’re like, ‘I’m so happy that you did this.’ Taking a shower in there is just so lovely.”

Trusting his gut, especially when it comes to color, is a common theme. The guest bathroom is a soothing sageish space that Bach wanted to feel spalike. Over in one of the guest rooms (which doubles as his office), a shocking pink comforter covers a daybed, while Technicolor art hangs above.

The only real neutral spot is the primary bedroom, which layers neutral shades of linen bedding and contains a simple drawerless nightstand. “I didn’t want the bedroom to feel crazy,” says Bach.  “Because you wake up and step into the bathroom, and that’s also crazy. I wanted to be intentional with the areas that need to be calming, and then the ones that should really wake you up and energize you.”

So much of the energy is reserved for the kitchen, where that backsplash plays nice with Plykea cabinet fronts made from an almond-colored laminate that shows off exposed edges. Down below, a linoleum floor mimics the marble. The trippy stone? Well, at this point it goes with everything, to Bach’s (and Ring’s) absolute delight. And if one day, he’s not feeling it anymore, that’s okay, too. “I’m not afraid to be bold and make a statement no matter what people say,” Bach says. “I think with personal style, it’s meant to evolve and it’s meant to change—and it’s meant to make you happy.”