The moody vibes stop at the front door. 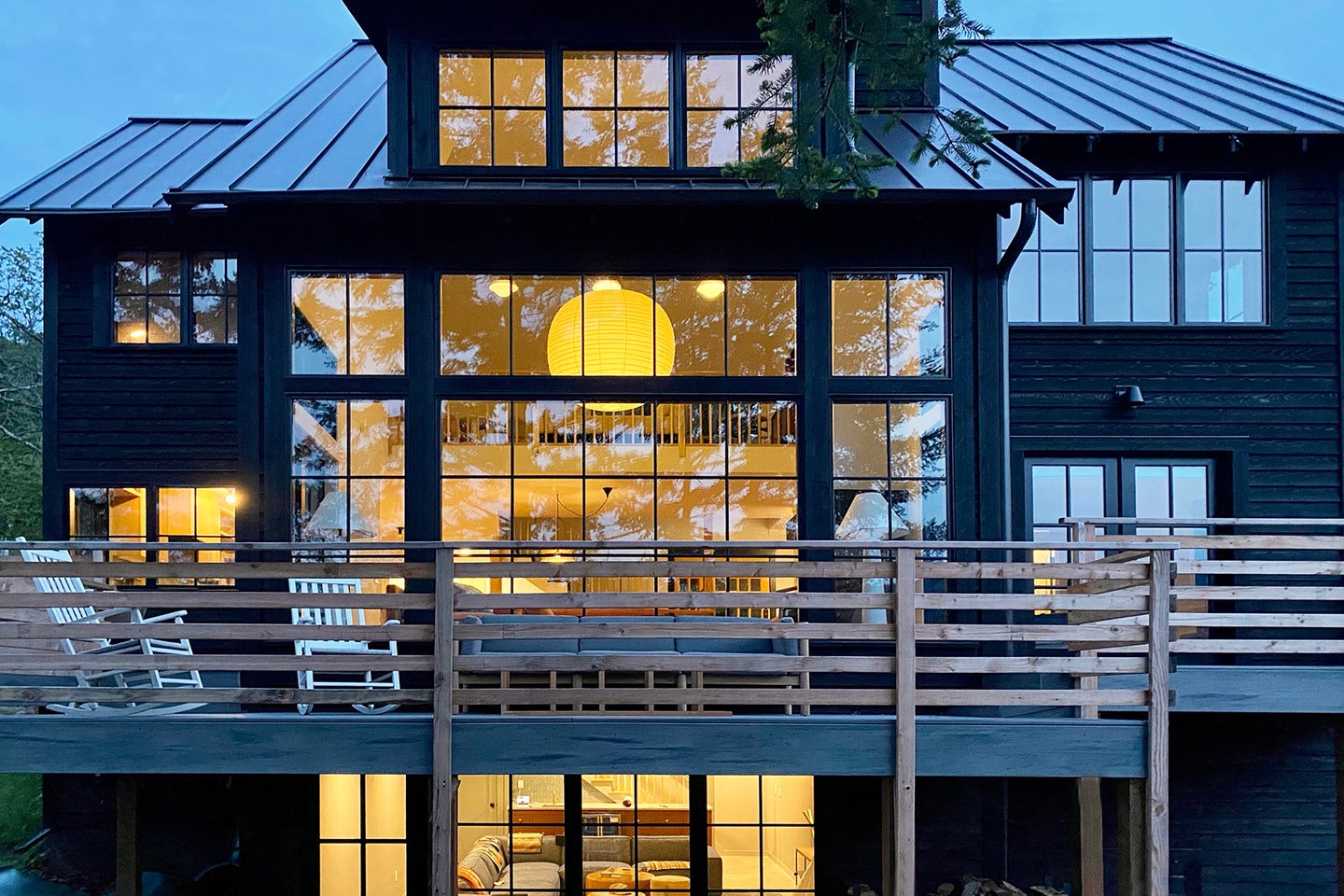 It has been said you should never judge a book by its cover—and the same is true of houses. This family’s black barn in Mosier, Oregon, appears brooding at first glance, but enter through its charming yellow front door and you quickly realize it is anything but.

The Portland-based couple—Kat is a chef; her husband, Henry, is a lawyer—were sold by the scenic location’s dazzling views over the Columbia River. “It had been a dream of ours to have our own little slice of the gorge since we first started visiting in 2008,” they say. “We always felt refreshed after an overnight or day trip to the Hood River area, and when the pandemic first hit, we jumped on an opportunity to purchase land.” They had high hopes of creating a weekend retreat for the couple’s 3-year-old son, Ben Peter—affectionately called BP—and Archie, their Airedale terrier, to roam free.

Though the property came with some prospective blueprints, it was Kat’s brother who suggested they enlist professional help to make sense of the house’s final design and decor—specifically, his decorator of choice, New York City–based architect Don Cantillo. After an initial video call, Cantillo flew cross-country to come to grips with the project. “We had a lot of discussions around: Is this going to be a country house? Is it a cozy space? Or one that should feel open and airy? Ultimately, they wanted it to be a fusion of all those things,” says Cantillo.

By working with the initial floor plan, he captured a sense of loftiness with pitched ceilings in the bedrooms and walls of windows, cozied up with colorful tile, patterned wallpapers, and punchy rugs. In the spare bedroom, a recess framed in Douglas fir and outfitted in a kaleidoscopic print replaces a traditional headboard and gives the compact spot a greater footprint. The luminous mezzanine (known as the “playzanine”), which divides the guest spaces from the master suite, is a room in its own right, with thoughtful father-and-son functionality: Henry’s desk is situated at one end of a red gingham rug; BP’s easel and play table at the other.

Kat and Henry craved a connection to nature even while indoors, so they chose rustic reclaimed juniper flooring throughout the house. Cantillo layered in a more literal take, adorning the walls in the laundry room and dressing area with faux bois wallpaper. “It’s almost like a cartoon of wood,” he explains. In BP’s bathroom, the bicolor striped tiles echo the trunks and lush foliage that surround the barn; the rearview mirror from a semitruck placed over the sink was both a practical solution—the vanity stands awkwardly in front of a window—and a personal one: BP loves trucks.

However, the shower and window curtains—a washable indoor-outdoor polyester in Schumacher’s spirited Citrus Garden—almost didn’t make the final cut. “It was a bit of a splurge,” admits Cantillo, “but I had the benefit of Kat’s brother helping to push it through. I chipped in, too, as an early housewarming gift, and it lends such character to the room.” (Kat’s brother also green-lighted the Noguchi lamp in the sitting room, another piece the couple deliberated over. Once it arrived, however, they loved it so much they bought another style for their bedroom.)

The most impactful room in the house is arguably BP’s, but the couple needed hand-holding with the application of the plaid wallpaper up to and over the ceiling. “The contractor dubbed the space as having an Elmer Fudd mood, which I think is pretty accurate,” says Cantillo. Farrow & Ball’s Duck Green, a color the designer had been coveting for some time, chimed perfectly with the checks on the window frames and wardrobe. The hue is so good that it carries over into other parts of the home, like the cabinetry in the mudroom and the bed frame in the primary bedroom, a subtle link that also strengthens the house’s relationship to the outdoors.

Once they tuck BP into bed, Henry and Kat often retire to the sitting room to enjoy those commanding views over the gorge. The playful coral pink velvet sofas aren’t the usual rustic fare (although they are a cotton mix, for practicality’s sake), but the fireplace has local resonance: Cantillo chose basalt for the mantel and seat, a material found in the area’s ridges, offset with slim tiles from Home Depot for the surround. “The house has such personality,” says Cantillo, “from somber on the outside to whimsical on the inside.”