When Friends Sleep Over, This Playroom’s Double Bunks Are Also Front-Row Movie Seats

Across the way, the play gym secretly stores toys. 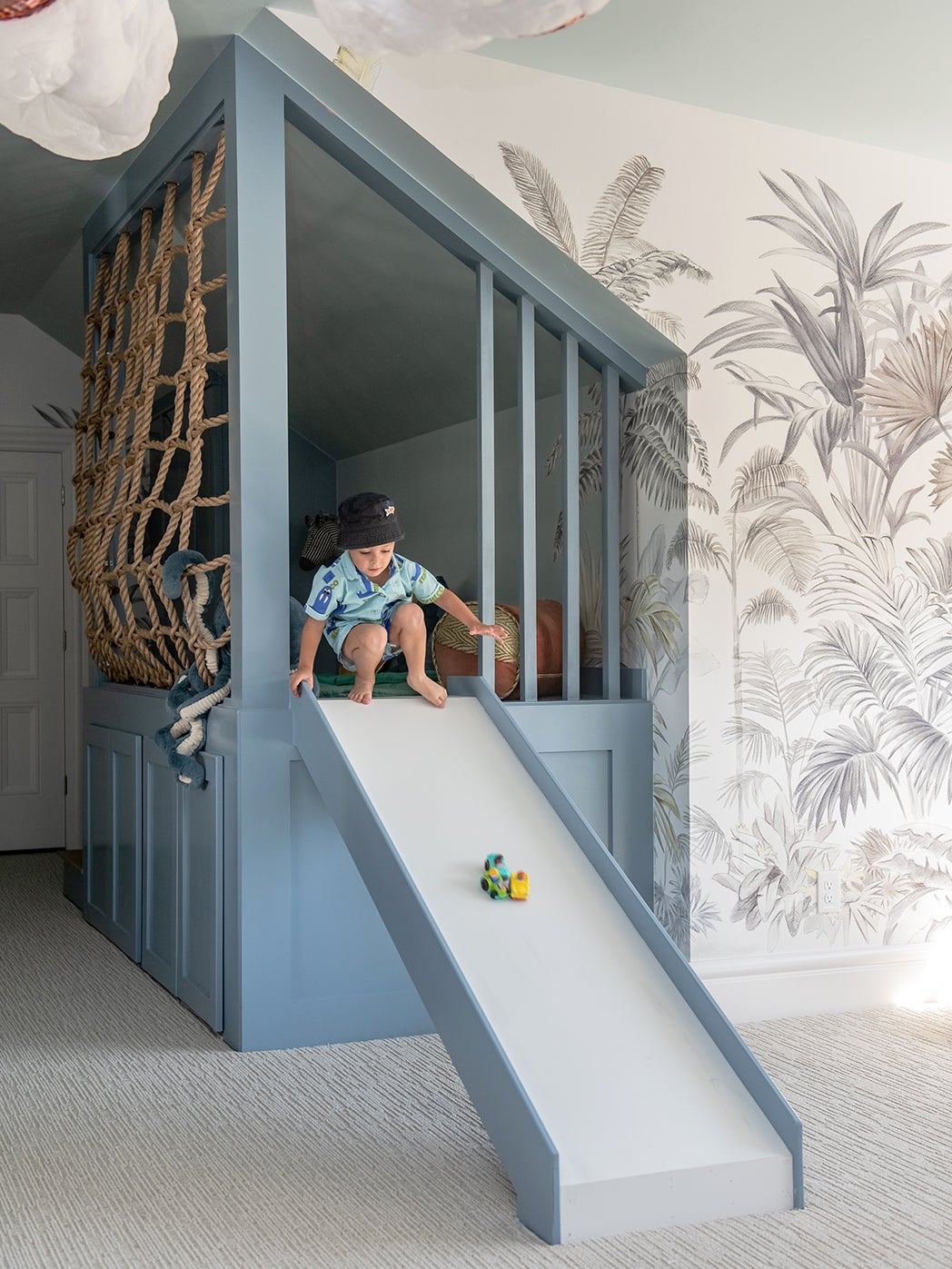 It’s standard decorating procedure: Choose your wallpaper, then pull a shade from the pattern to be your no-fail accent color. That’s what Aubrey Smith of Aubrey Veva Design planned to do when she and her client, mom-of-two Jessa Maddocks, landed on a whimsical jungle print for her kids’ playroom (Gatsby is 4; Jazzy is 2). Then “Jessa pushed me to something bolder,” says Smith, no surprise considering Maddocks is the founder and creative director of an inclusive fashion label known for its statement dresses. Tangerine it was.

With a generous footprint to work with—the space is above the Utah new-build’s three-car garage—Smith was able to tick off the play gym, two sets of bunk beds, and hardworking storage on Maddocks’s list and still have space left over for a window banquette and an activity table. The juicy citrus shade makes an appearance in every one of those spots. Here’s how Smith set Gatsby and Jazzy’s playroom apart from all the rest.

Infuse the Fun With Function

The boys love scaling the jungle gym’s rope wall and racing toy cars down the slide (one even took to its irresistibly sleek white surface with a marker pen, but luckily it scrubbed out). Granted, not every playroom has space for one, but by lofting the feature, the family didn’t lose out on much square footage. In the enclosed space underneath, they stash away the “ugly” toys every kid loves.

When a breather is in order, duo swinging egg chairs hang across the way, purposefully close to the Berber carpet. “The little ones can get on and off themselves, and the chairs will adjust as the boys get bigger,” explains Smith.

Bunk Up in Style

If bunk beds have visions of head bumps and long falls dancing in your head, peep Gatsby and Jazzy’s custom version. The pair of sleeping quarters is accessed by steps, not precarious ladders, and each has its own sconce should a storybook be on the agenda. “The idea is to install a projector screen over the window that’s in between the beds, so they can watch movies when they have sleepovers,” says Smith. When the credits roll, velvet curtains (in vivid orange, of course) turn each bunk into a cozy, private cocoon.

Catch Them by Surprise

Smith had to interview several carpenters before finding one who could pull off the arched cabinet doors, a shape echoed on the bunk beds. “They add a certain edge to the space,” explains Smith, but the real wow moment is inside the wardrobes. Everything is coated in tangerine paint, from the framework to the shelves, which were again installed low enough so the kids can put away toys independently.

With a disco ball in her own parlor (“When the sun hits in the morning, little light rays shine everywhere and it’s just so magical”), Smith instinctively knew the playroom’s ceiling would benefit from a touch of rose gold glitz—and fluffy cloud lights. “They’re ambient more than anything, but they really add some drama. Any adult walking into the space says it takes them back to their childhood.” And the boys? They just think disco balls are the norm.