With the kids all grown up, the house is following suit. 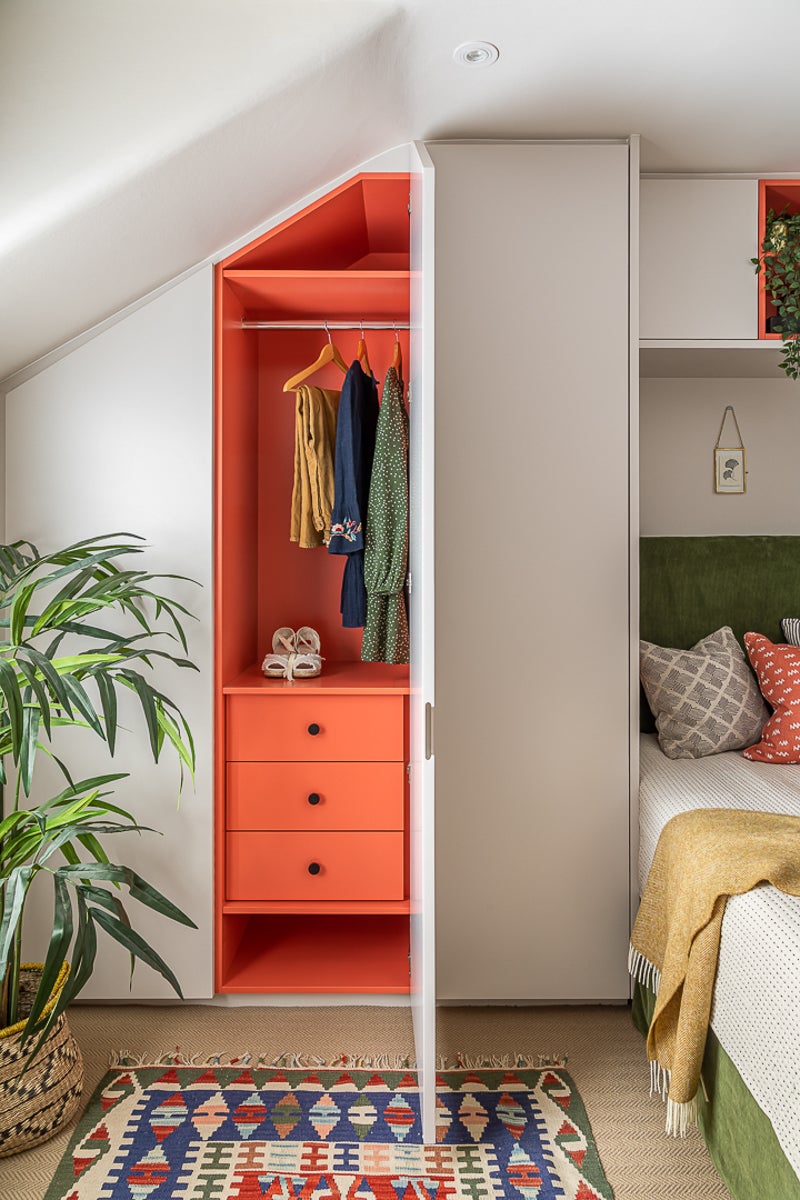 Once your kids hit their late teens and start to fly the coop (even if just temporarily for college), it’s not unusual to get the itch to downsize. But Constance and her husband, Boris, parents to Gaspard (21), Félicité (18), and Céleste (16), didn’t feel the sense of urgency that most to-be empty nesters do. The pull to their elegant, double-fronted home in Battersea, South London, which they’ve owned ever since Céleste was a baby, was too strong. “We toyed with moving but came to the conclusion that we still have a few years ahead of us with the children in the house,” says French-born Constance, “and with a bit of reconfiguration, it could be a space where they could take pleasure in hosting their friends.”

Constance, recalling that a mom at her daughters’ school was launching her own interior design studio, landed on Alex Keith and Alison Johnson, cofounders of Otta Design, whose use of color and pattern immediately resonated with her. “I knew that I wanted to bring in tones of yellow, warm orange, and brown, but I wouldn’t have known how to use them,” says Constance. The designers’ brief was to reflect the house’s newfound maturity, but without overhauling the existing furniture and finishes. “We couldn’t justify spending a fortune; we needed to reinterpret what we had to make it work harder,” explains Constance. Luckily, Keith and Johnson had plenty of clever ideas up their sleeves.

Transforming a Playroom Into a Sophisticated Sitting Room

This was formerly a home of segregated spaces, but with the years of bulky plastic toys firmly behind the family, the designers urged their clients to wave au revoir to the playroom and knock through the wall into the neighboring sitting room. The benefit now is two open lounge spaces in one, drenched in natural light thanks to the windows on both ends of the room. They updated the old playroom by painting the formerly beige built-ins red, swapping out the handles, and removing several shelves to create space for ornaments and a small minibar.

“That wall felt quite busy, but now my objects have more space to breathe,” says Constance, who can finally enjoy the space for herself, even if it’s as simple as sipping a coffee or reading on the small sofa by the window overlooking the garden. There is harmony across both zones: Beige curtains in the terracotta room mirror the adjacent space’s wall color, while the brick-toned cushions on the modern accent chairs pull off the same effect. As Constance puts it: “It’s as if the rooms talk to each other, while being very different.”

When the family moved in, Constance wanted to confine the “chaos” created by three small children to the kitchen, which is why she favored a separate formal dining room. But after a decade and a half of barely using the space, it was clear what they needed was a place for the kids to host their friends and watch TV—and where Gaspard, a keen rower, could practice on his machine (which is just out of sight in the bay window). So it was out with the dining table and in with joyful shelving to house their books and DVDs—plus a sociable seating arrangement. Now a much-used family room, it’s where they all get together to hang out on weekend afternoons, often playing cards over a slice of something sweet.

Giving Function (and Beauty) to Bathrooms

The house’s cosmetic update meant finally addressing a poorly plumbed bathroom with low water pressure and a comically small sink. Gaspard lucked out with its transition to a sleek shower room of his own, while his sisters claimed the revamped space all three siblings used to share. Offering ample storage for their stash of products, it also houses their mom’s favorite feature: the laundry hamper. “It’s so practical,” says Constance. “It opens like a dishwasher and means no more spillage of dirty washing across everyone’s bedrooms.”

Going Big on Personality With the Bedrooms

“It was getting to the point where the kids were almost embarrassed to have friends over,” jokes Constance of the “babyish” decor of the children’s bedrooms (Félicité and Céleste were still using children’s wardrobes from IKEA). So everyone got a bed upgrade, with Félicité’s opulent velvet headboard complementing her Van Gogh blossom wallpaper. “The girls are very different in their tastes; she wanted something dramatic but classic,” says their mom.

Céleste, meanwhile, desired a more contemporary look, with a request for orange and a cocooning bed scheme. Otta’s solution was to paint the inside of her wardrobes tangerine to make them pop, and to echo the color in an alcove and a nightstand niche—the perfect nook for a bedtime read and phone session. This neat detail was also carved into Gaspard’s existing wardrobes, which were refreshed in a rich shade of olive, with the space in between accessorized with a striped headboard. His parents treated him to an elegant sofa placed opposite the bed, creating space to flop down with pals.

Putting the Ceremony Into a Guest Space

In the upstairs media room, Otta repurposed what was already in situ: a beautiful wood unit. The designers removed a low shelf, along with the TV hanging above it, to make space for another bed with a statement headboard. Not only does it create a comfortable place for the children’s grandparents to stay when they visit, it’s a chic home office for Constance, who has added her desk here. With every generation considerately catered to, this is a home where every room gets used.