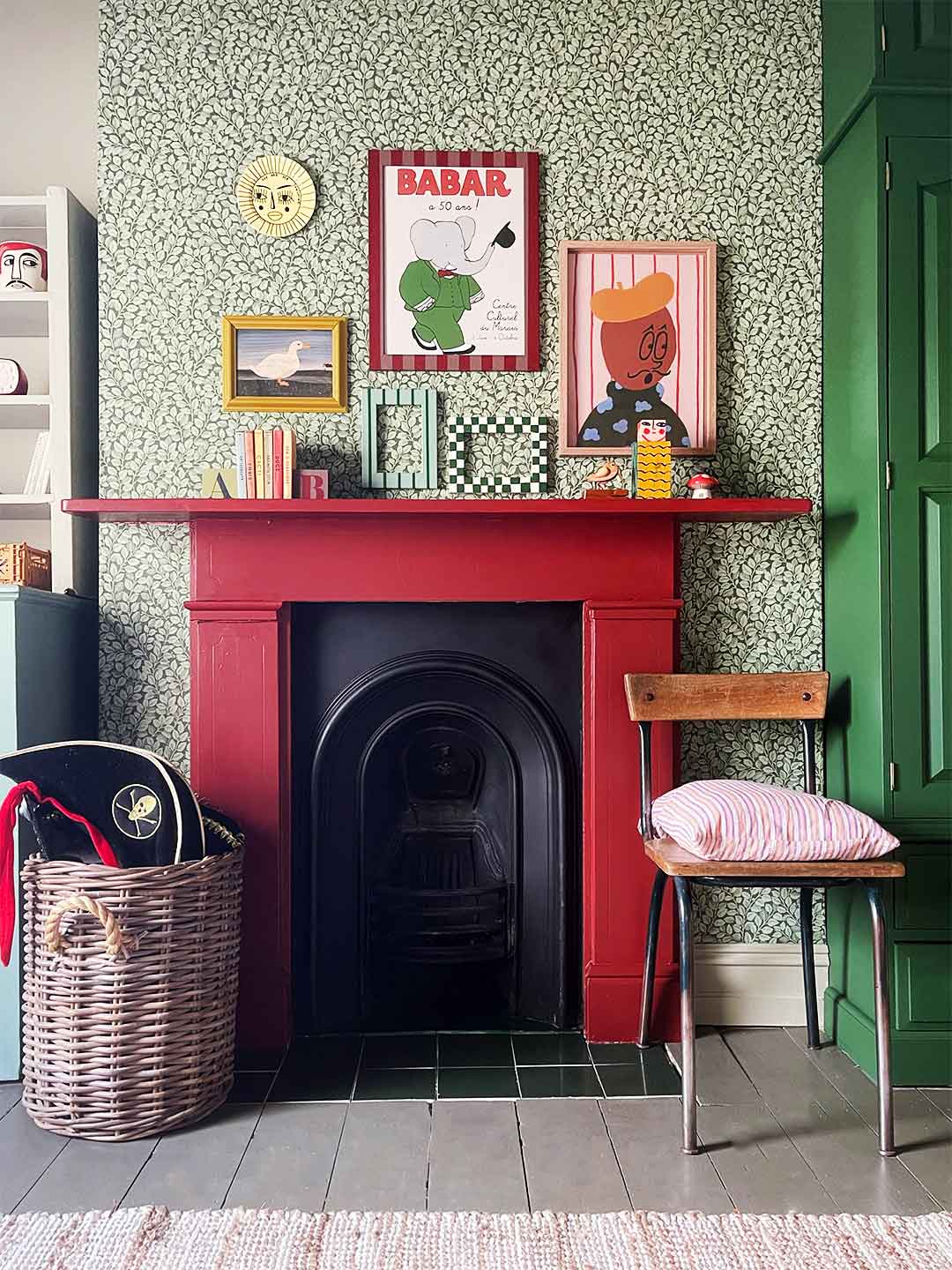 When Laura Reeves’s middle son, Reuben (8), asked for a Spider-Man-themed bedroom in the family’s new home on England’s Kent coast, she came up with a clever solution. Rather than giving into the theme literally—knowing that cartoon bedding and decor would inevitably outlast Reuben’s affection for said superhero—she appealed to his imagination through color. “My compromise was what I dubbed a ‘Spider-Man-red’ fireplace and green wardrobes reminiscent of the Incredible Hulk,” says Reeves, founder of hand-painted homewares brand All the Things.

She applied the same outside-the-box thinking to her whimsical wallpaper choice; instead of a straight-up Marvel backdrop, she shares, “I said that the one I liked would be like sleeping in the jungle, and he was so excited by it.” Reeves was conscious that she didn’t want to redecorate her kids’ bedrooms every couple of years: “Their tastes change so quickly; I’m hoping this can grow with Reuben.” The resulting room is neither babyish nor overly sophisticated, playful yet cozy. Here are the inspired details Reeves used to make it happen.

Versatility was the selling point of IKEA’s Kura bed: The mattress can be positioned up high, creating play space underneath, or lower down with a canopy bed vibe, depending on the age of your child. But Reeves wasn’t thrilled by its plain white MDF panels. “I wanted to make a feature of it somehow,” she says. Chalkboard paint to the rescue! She coated the sides to create a wipeable surface for Reuben to get creative. “Even I write stuff down that I need to remember to pack for school in the mornings,” she says.

Create a Spot They’ll Want to Read In

There was technically no need for another sleeping spot underneath the lofted bed—Reuben’s two brothers have their own rooms—but Reeves did want a separate area where he could retreat to and host occasional sleepovers. So while there’s an extendable mattress placed below, it’s more for hanging out than catching z’s. Reeves hung homemade curtains made from her stash of vintage fabrics on tension rods for the perfect den (and to hide stray toys in a rush). “He feels like he’s camping in there,” says Reeves. The addition of a spotlight and bookshelf have made it a relaxing space for Reuben to curl up and read, too.

“It’s all down to personal choice, but I find white quite stark,” says Reeves, who embraced the room’s north-facing orientation and chose a cocooning palette over rainbow brights. She landed on Farrow & Ball’s French Gray, with its warm green tones, for the walls, and an olive shade from the local hardware store for the floorboards. “Both of them complement the primary colors in the room and provide a neutrality without being beige,” she explains. On the bed, an assortment of printed sheets, pillowcases, and duvet covers all come together in mismatched harmony, relieving the pressure of coordinating sets.

Over time, mother and son have collected a lion-face plate, a bird mosaic he made in school, and a framed print of Babar to deck the jungle-themed wallpaper with animals. The duck print was found at a car boot sale for just $3; Reeves simply painted the frame a contrasting yellow. “I love thrifting, and the kids have always been dragged along with me, so I’m lucky that they now love it, too,” says Reeves. “I give them a tiny budget, and they can’t believe what they can get for their money!”